Colonials fight to draw with Bulldogs 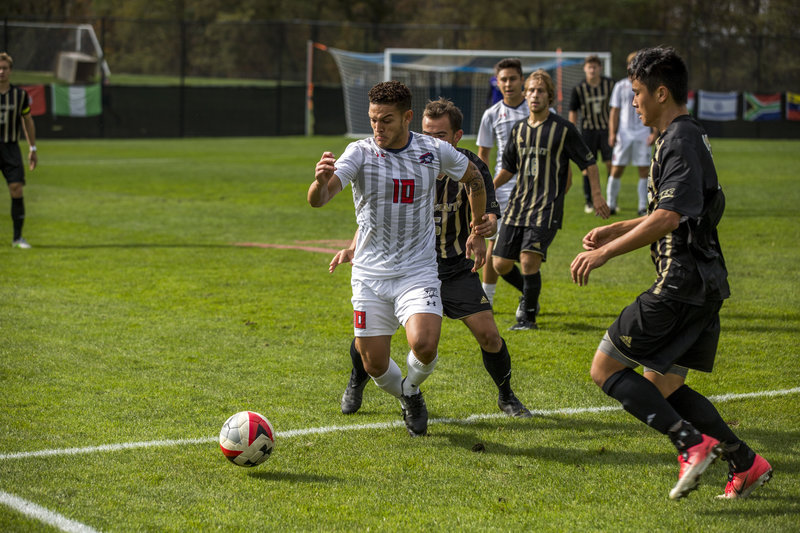 The Robert Morris Colonials ended their game against the Bryant University Bulldogs in a 1-1 draw Friday afternoon. This tie would be the Colonials’ third of the season.

During the first half of the game, the score was tied at zero, but the Colonials were being out shot 8-3 due to the great play of the Bulldogs offense attacking the Colonials defense and pounding balls on the net.

In the second half of the game, the Colonials scored a goal by Bayley Winkel, his eighth of the season with an assist from Keane McIvor at 38:26 to make the score 1-0. After a hard-fought 21 minutes, the Bulldogs got a goal past Colonials goalie Winter Fondi at 17:40 to tie up the score.

At the end of overtime, the Colonials bounced back with 10 shots and the Bulldogs 15.

“We know the way they (Bryant) played and it was going to be probably one of the hardest physical game of the conference play,” said Denniston. “In the beginning, we weren’t up for it but we came around and did very well in the second half, probably deserved the tie.”

The Colonials are picking themselves up as they are in third place in the standings. Keane McAvlor gives credit to the coaching staff for the team success the past few games.

“The effort was put in with the last week in practice,” said Mclvor. “We want to prove ourselves to other teams. With the help of coaches and staff, it helps us and motivated us.”

The Colonials have five more games until playoffs. McIvor says there are doubters and he wants to prove them wrong as the future for the Colonials gets stronger.

“Lots of people have doubts in us, but I think we can go on and win the conference if we continue to work hard and put in the work at practice,” said McIvor.

The Colonials next game is home on Sunday, Oct. 15 when they face Farleigh Dickinson at the North Athletic Complex.