Colonials get back in win column against Pitt-Johnstown 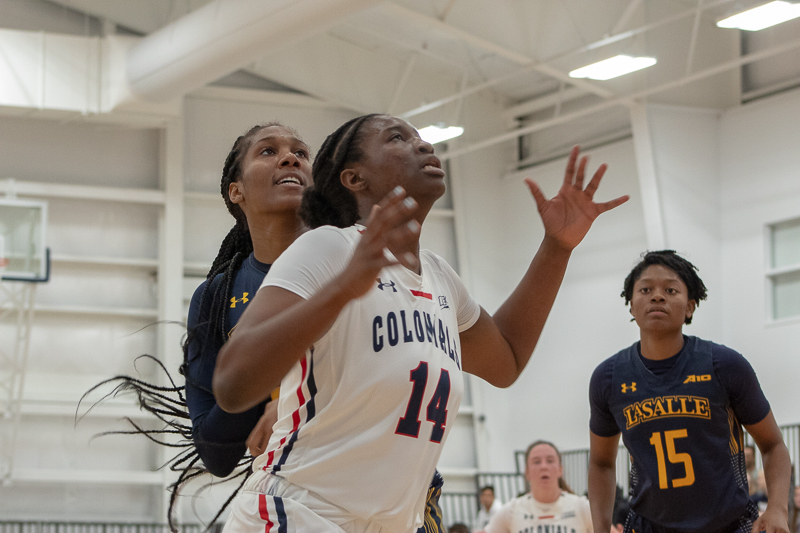 Irekpitan Ozzy-Momodu boxes out her opponent while attempting to get a rebound in the Colonials win against La Salle.

The Robert Morris University Colonials (2-7) snapped their six game losing streak against the Pitt-Johnstown Mountain Cats (4-6, 1-2 PSAC), by a final score of 73-53.

The Colonials looked comfortable at home for the first time this year. Isabella Posset, in her first collegiate start, orchestrated a Colonials offense that was up-tempo, smart in transition and exciting to watch. The bulk of the scoring fell on the shoulders of senior Nia Adams and sophomore Irekpitan Ozzy-Momodu. Adams finished the first quarter with five points. Ozzy-Momodu had six points.

Honoka Ikematsu provided the backbone for the Colonials’ defense in the first quarter. The sophomore guard had a pair of steals. Nneka Ezeigbo also contributed on defense. Ezeigbo had a steal and a block. The Colonials would lead 22-14 heading into the second quarter.

The fourth quarter was much of the same from the Colonials. Offensive rebounds were crucial to today’s win. Robert Morris had four in the forth quarter alone.

Head coach Charlie Buscalgia explained the decision to start Posset, “Everybody has their things they do well and things they need to work on. Bella does a nice job of attacking and being able to knock a shot down. Defensively, she does a great job on the ball and getting turnovers and steals. She put in a good week of practice. When you see someone put in a good week of practice and really working at their trade, the opportunity was there. With the change made we were looking for a response from everyone.”

Coach Buscalgia was looking for a response and he got it. Isabella Posset finished the night with 16 points and three rebounds. Nina Augustin had 13 points, two assists and two steals. Ozzy-Momodu had an 11 point and 16 rebound night. This was her first career double double. Senior Nia Adam finished the night with 10 points, two rebounds and two steals

This was a phenomenal afternoon for the Robert Morris team stats. The Colonials pulled down 44 rebounds. RMU also stole the ball from the Mountain Cats, 19 times. All of this lead them to their highest scoring output of the season.