Colonials hold on to defeat Crusaders 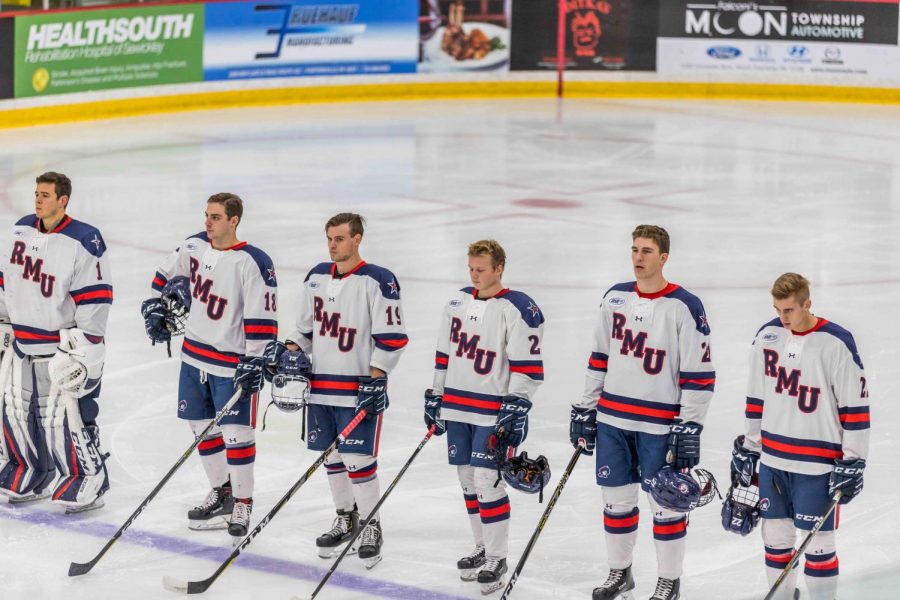 Early in the game, the Colonials would put heavy pressure on the Crusaders for the first 10 minutes of play, but on a slashing call on Michael Coyne, the Colonials as a team would come up big on the penalty kill, with Francis Marrotte making a diving save, and a host of Colonials in the net to block the rebound.

With 5:29 remaining in the period, a backhand by Kevin Darrar of Holy Cross would just go over the crossbar and out of play for the Crusaders best chance of the night. Throughout the first period, Robert Morris seemed to be ready to play, both offensively and physically in the game.

On the power play with just under 3:30 left to play, the puck would squirt out to Justin Addamo, but the 6’6” Colonial would barely miss the shot.

At the end of the first period, the score would be tied 0-0. Robert Morris was behind 11-4 in shots, with Eric Israel, Daniel Mantenuto, Alex Tonge, and Luke Lynch each with one. For Holy Cross, Jack Surowiec, Johnny Coughlin and Michael Laffin each had two shots in the game.

With only 1:58 gone in the period, Robert Morris would get on the board first as a no-look backhand pass from Justin Addamo would find the stick of Luke Lynch. The Pittsburgh native knew just what to do with the puck as he scored his fourth home goal of the year. This would also be Lynch’s second goal in the past three games.

When asked about playing with Justin Addamo, Lynch said that he plays well with his big body and made an unbelievable pass on the goal.

While on the penalty kill, the Colonials would catch a break, as a shot from Dalton Skelly would hit a body in front of the net and clang off the iron in behind Francis Marotte, but stay out. Less than two minutes after that, the puck would again stay out of the Colonials net, as Nolan Schaeffer slid behind Marotte to block the puck. When asked about the help from his teammates, Marotte said, “We’re going to need those bounces if we’re going to win those types of games… it wasn’t pretty, but a win’s a win.”

With 8:55 remaining in the period, Kip Hoffman would get a chance for the Colonials, but the puck would be swallowed up by Erik Gordon. A shot from Alex Robert with just over two minutes remaining was also snared down by Gordon.

The Colonials would again be outshot in the period, 10-9. Jack Surowiec was now leading Holy Cross with four shots on net. Nick Jenny of Robert Morris had the only penalty in the period, two minutes for slashing at 5:02 gone in the period.

Nolan Schaeffer would get an excellent chance for the Colonials with about three minutes gone in the third as his shot would just glance off the post. With just under seven minutes remaining in the period, Holy Cross defenseman Spencer Trapp would get a good chance to tie it up for the Crusaders, but his shot was stopped by Marotte.

Inside the last five minutes of the game, the Crusaders would put heavy pressure on goal, but Francis Marotte would stand strong for the Colonials, making plenty of great saves. Robert Morris would add an insurance marker on a goal by Michael Coyne with 45.9 seconds remaining in the game to put the Colonials up 2-0.

At the final buzzer, the Colonials would win by a score of 2-0. Michael Coyne and Luke Lynch had the goals for the Robert Morris in the game. Francis Marotte made 36 saves in the shutout.

The Colonials and Crusaders were both 0-2 on the power-play in the game. Nick Jenny and Michael Coyne had the two penalties for Robert Morris, while Anthony Vincent and Bryce Dolan had one each for Holy Cross.

The Colonials will look to complete the sweep as they face Holy Cross again tomorrow at Colonials Arena. Puck drop will be at 4:05 p.m. About tomorrow’s game, coach Derek Schooley said, “We’ve got to go into Christmas break feeling good ourselves… and start off really quickly tomorrow.”