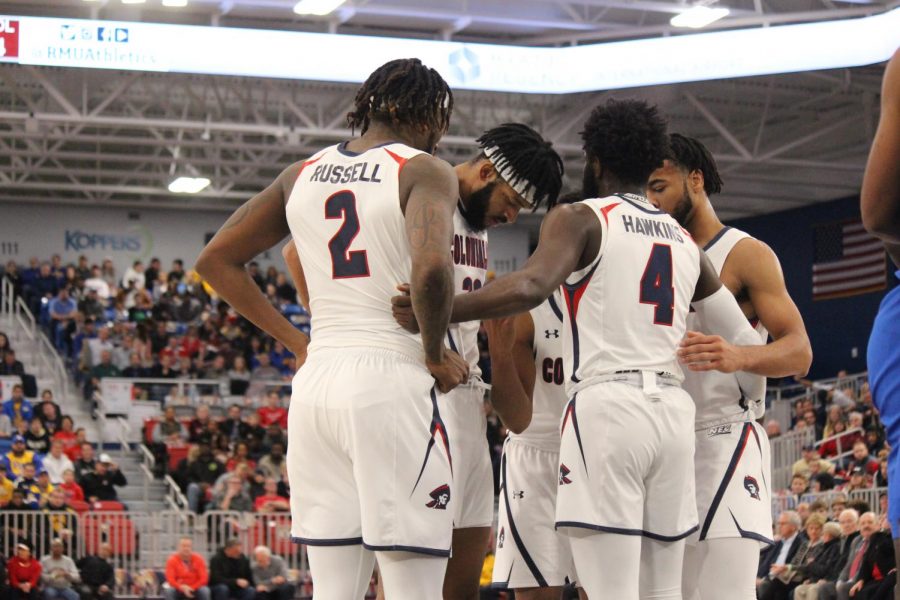 CHICAGO, IL. — After a slow start to their non-conference schedule, the Robert Morris men’s basketball team (1-4) looks for a spark against the University of Illinois at Chicago (1-3) on Thursday night. Both teams have struggled early this season against tough opponents and are looking for a confidence booster.
Recapping RMU
The Colonials continue their rugged non-conference slate by hitting the road once again. Four out of their first five games have been on the road, and they will continue this trend against UIC. After dropping their home opener to the University of Pittsburgh (3-2, 1-0 ACC) by a score of 71-57. The Colonials then traveled to Toledo, Ohio to take on the Howard Bison (0-5) of the Mid-Eastern Athletic Conference. The Bison had not played well to start their season as well, allowing the Colonials to take full advantage as they would win this matchup 85-65 for their first victory of the season. Five Colonial players recorded double-digit points, including Charles Bain and DJ Russell off the bench. RMU shot 52.9% from beyond the arc.

The team would continue their road trip by staying in Toldeo to face the University of Toledo Rockets (3-1). The Rockets would top the Colonials in this contest by a final of 70-56. AJ Bramah had the most impressive performance for the Colonials, finishing with 10 points, three assists and four steals while also adding 16 rebounds. Robert Morris struggled from three-point range as they only made eight buckets out of their 26 attempts, and they only reached the foul line five times and made only two shots.
Previewing UIC
UIC has started similarly to the Colonials as they have only recorded one win. That win came against a Division II school in the Olivet Nazarene Tigers (6-1, 1-1 CCAC). They would only defeat them by three points in their matchup, 75-72. UIC then dropped their next three games. Their biggest matchup thus far was against the 14th ranked Memphis Tigers (3-1), a game they would lose by a large deficit, 92-46.

The Flames are averaging 56.3 points per game and have given up 74 points per matchup through their first four contests along with them shooting 34.2% as a team from the field. The team has not helped themselves on offense either, as they turn the ball over nearly 15 times per game.
Players to Watch
AJ Bramah (RMU)

The 6’7” junior has been a pivotal piece of this Colonials team so far this season thanks to his strong ability to rebound. Bramah has grabbed 12 rebounds on the offensive side of the ball but has been a presence defensively thanks to his 29 rebounds. AJ has been all-around dominant on defense with his team-high nine steals. Not only has he played solidly on defense but his seven points per game will help him be a player to watch throughout the season.

The sophomore from Utica, New York has been a reliable sixth man off of the bench for the Colonials this season. He’s third on the team in scoring, averaging 7.2 points per contest. His best performance of the season came at home against Pitt as he scored 11 points in their loss as he added a three-pointer in that matchup. Hawkins has also been the most dependable free thrower for RMU as he has made 10 out of his 12 attempts at the line. Jalen will be a significant factor this season and against UIC due to his offensive punch and good ball-handling skills.

UIC’s best all-around player comes into this matchup averaging 11.3 points per game with a season-high of 21 points against Olivet Nazarene. The guard leads the team as well in steals with four, assists with 15 and 21 total blocks. The senior will be a force whenever the Flames square up with the Colonials.

So far this season, the freshman has proved to be an important piece to this Flames’ offense as he is averaging nine points per game. Taylor is tied for the team lead with six made three-pointers, while shooting at 42.9% from beyond the arc. He has also been their best offensive player from the floor, shooting 48.1%. Taylor’s consistency off the bench as a freshman will be key as this season progresses.
Prediction
This contest at Credit Union 1 Arena will be a crucial early-season matchup as both teams look to spark a winning streak. However, it will be the Colonials to start their own streak as they will go into enemy territory and grab a victory over the Flames with a 63- 51 victory. This game will be low scoring and will rely on strong defense from RMU.