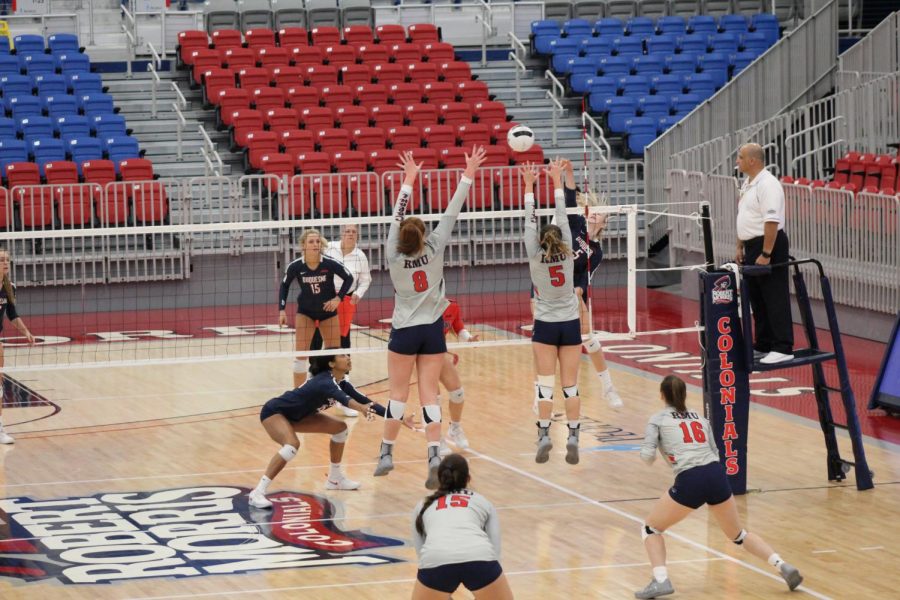 MOON TOWNSHIP– The RMU volleyball team (16-3, 6-0 NEC) heads into the end of the week with two road games as the team nears the halfway point of their season. Robert Morris will face the Merrimack Warriors (1-12, 0-6 NEC) Thursday night at 6 p.m. and the Central Connecticut Blue Devils (7-10, 3-2 NEC) on Friday at 7 p.m. The Colonials enter with momentum from a six-game winning streak, with all wins coming in NEC play.
Recapping RMU
Robert Morris recorded a 3-0 record last week, with three straight home wins capped off by a huge sweep over Long Island (5-12, 4-1 NEC) to claim sole possession of first place in NEC. The Colonials look to improve to 8-0 in the NEC and continue to prove that they are the team to beat. RMU continues to improve and display their dominant play over any NEC foe and will continue to show their growth from the 2018 season.
Scouting Merrimack
Merrimack’s first season in the NEC has been a struggle, to say the least. The Warriors have lost 10 in a row and have not won a conference game (0-6), making the on-court transition the toughest it could be. Merrimack has only one win, defeating Saint Michaels (1-11) in their second match of the season. Merrimack will look for the upset against this powerful Colonials team.
Previewing CCSU
The Blue Devils find themselves directly in the middle of the NEC standings entering the middle of the week. This will be a tough game for CCSU and they will need to earn a win to stay alive near the top of the standings. Central Connecticut has a 4-3 home record and if they wish to keep that record above .500, they must play fundamentally sound against a scrappy RMU team that will take advantage of almost every opportunity handed to them.
Players to Watch
Emma Granger (RMU)

Granger has been incredible all season long both on and off the court for the Colonials. She leads the team in many statistical categories including kills (196) and service aces (39). She continues to be a dominant force out of the middle for RMU in her junior season.

The Robert Morris setter has been steady all year long for her team. Brown has 599 assists on the year and leads a quick offense that has been tough to stop. She continues to play like the best player in the entire NEC.

This senior outside hitter has been the Warriors’ best offensive threat in 2019. She has recorded 92 kills and 40 errors this season, both numbers lead the team. Merrimack will depend on Flaherty to be the main source of offense if they have any chance of taking down the Colonials.

Sperduto is a senior setter who will lead the Warrior offensive rotations on Thursday. She has tallied 235 assists and eight service aces and will be important for Merrimack to have an efficient offensive attack.

Henderson, a junior, has recorded a team-high 184 kills and 68 errors. She is a constant threat to put the ball down.

Another junior, Eisenga has been a steady libero for the Blue Devils during the 2019 season. She has a team-leading 287 digs and 10 service aces. If Central Connecticut hopes to slow down the RMU attack, lead by Granger, Eisenga will be a key part of the reason why.
Prediction
Robert Morris will continue their incredible 2019 season with two more road wins heading into the halfway point of the year. The Colonials will take care of both Merrimack and CCSU handily and sweep both matches on Thursday and Friday nights.

RMU wins 3-0 over Merrimack on Thursday and 3-0 over CCSU on Friday.