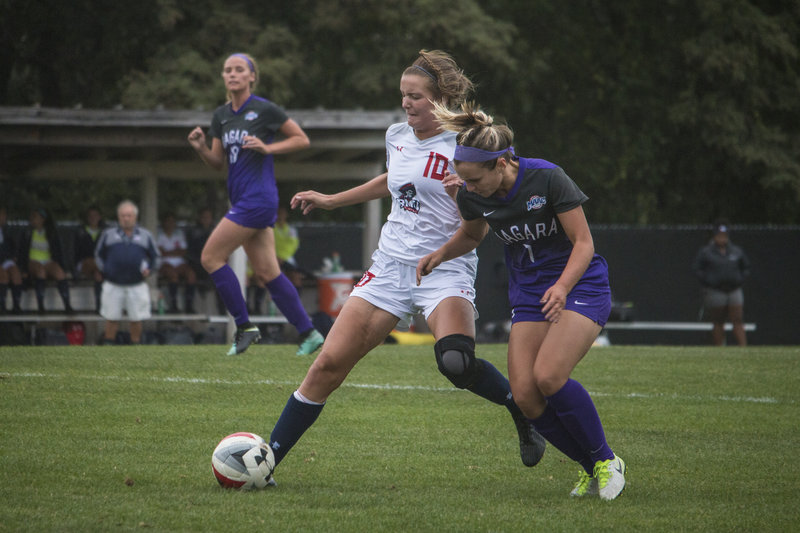 The Robert Morris Colonials (1-4) lost to the score of 2-1 against the Niagara University Purple Eagles (2-1-1) at the North Athletic Complex on Friday afternoon.

The Colonials kicked off the scoring at 4:38 in the first half by forward Jane Schleicher with an assist from Kayla Kelley and Maddison Duncan. This goal was their quickest of the season.

Robert Morris has slowly built up their scoring habits as they were shut out for their first three games of the season.

On what made the scoring easier, Coach John Kowalski said, “We changed our formation, though we decided to play with a couple of forwards on top.”

Over the course of the early part of the first half, the Purple Eagles had a tough time maneuvering around the field. Even with their struggles, Niagara led the shots against RMU 2-1 around the 20-minute mark in the first half.

“Well, we need some fresh legs,” said Kowalski, who went on to discuss the importance of staying fresh in order to continue to execute passes at the highest level.

RMU has been pushing for more offensive opportunities as they made two scoring attempts around the halfway mark in the first half.

The Colonials had the opportunity to score at the 28-minute mark thanks to a defensive miscue from the Purple Eagles but couldn’t capitalize on the opportunity.

The first half ended with 12 shots for RMU and 6 shots for Niagara with a score of 1-0 Robert Morris.

The second half started very quietly for both teams as they both couldn’t manage to put a quality shot on net in the first 10 minutes.

Niagara tied the game at the 64:26 mark in the second half when Niagara’s Breanne Guevara found the back of the net.

Niagara scored at the 82:16 mark in the second half, making it 2-1 after RMU goalkeeper, sophomore Julia Schmid got beat for the second time in the contest.

As RMU scrambled to score within the last couple minutes of the game, Niagara held their own, winning the game 2-1.

Coach Kowalski described what he thinks his team needs to do to be better moving into their next game.

“Well, to give a better effort and not to lose the game ourselves,” said Kowalski.

Robert Morris continues their season on the road against Howard University on Sunday, Sept. 3 in Washington, D.C.