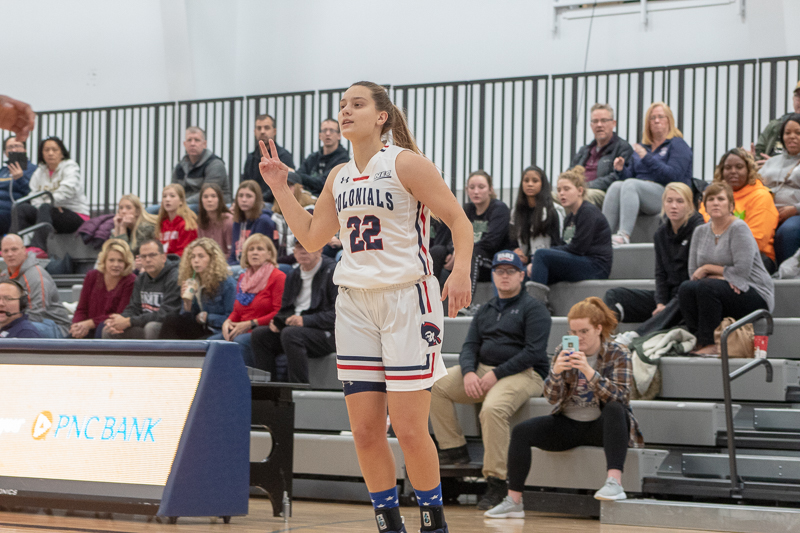 MOON TOWNSHIP– The Robert Morris University women’s basketball team (2-2) suffered a loss against Columbia (2-3) on Sunday, losing 61-59. Although the score was tight throughout the entire game, several fouls by the Colonials hurt them in the long run.

Coach Charlie Buscaglia said that the girls were simply looking to get better through playing Columbia.

“To have a game where we get better than the last time,” said Buscaglia. “Not to lose our way when it comes to our passion, our focus, the things that we value.”

In preparation for the game, junior center Irekpitan Ozzy-Momodu said, “We focused a lot on the defense because that’s our staple.”

Columbia led after the first quarter, 21-17, with a buzzer-beater three-pointer. Although the Colonials led in terms of possession, they spent much of the first quarter setting up plays but missing important scoring opportunities.

In the next quarter, the Colonials picked up speed. Again, they scored first with a lay-up from junior forward Holly Forbes, which was met again with a three-point score from the Lions.

Strong defense from the Colonials kept the Lions from scoring several times and forced turnovers.

With a substitution that brought Ozzy-Momodu into the game, the Colonials went on a rapid-fire series of scoring. Ozzy-Momodu hit a shot which was followed immediately by another from Forbes. Nina Augustin sank a three-pointer before Columbia called a timeout, effectually stopping the momentum for the rest of the quarter.

A jumper for Columbia closed the first-half at 32-30.

Both teams came out to play a tough and gritty second half. The third quarter was defined by a lot of rough playing, resulting in more fouls and players frequently hitting the hardwood.

The Colonials pulled-ahead, looking to create a gap in the scoring. Fouls by the Lions resulted in perfect scoring opportunities for the Colonials, who ended the quarter with a 51-46 lead.

In the fourth quarter, the pace of the game picked up rapidly. Columbia played at a much faster pace and outscored the Colonials by seven points, resulting in the win.

For the first several minutes of play, neither team was able to score. Both sides had several bobbles with the ball and bad passes that led to many turnovers. Finally, senior Nneka Ezeigbo sank both her free throws after a foul.

After that, Columbia hit several big shots to swing momentum in their favor.

The momentum shifted against the Colonials with a technical foul by Ezeigbo. This set off a series of fouls by the Colonials that ultimately cost them the game. Columbia closed out the game to win it 61-59.

“They played well in spurts,” said Buscaglia. “Columbia’s a strong opponent when it comes to coming out of the gate and going hard. We had to make sure we got better as the game went on and I thought we did defensively.”

The Colonials shot 32.9 percent for field goals, 21.9 percent from the three-point line, and made 50 percent of their free throws. They were led by Esther Castedo in scoring and blocks.

“A big focus for this week was free throws, and you can’t even tell with our performance today,” said Holly Forbes. “That’s going to be another big focus after this game, emphasizing free throws, our defensive and jumping to the ball.”

Following a six-day break, the Colonials will travel to face Kent State (3-1) next Sunday. Buscaglia feels that much needs to be done during that time.

“We just didn’t execute down the home stretch and that’s something we definitely got to get better at,” said Buscaglia. “We got a lot of things to do in six days. A lot of working on video and getting in the gym.”

Despite the loss, Buscaglia seems optimistic. “We had some good moments as a team out there, and we’re going to have to focus on those as well as the moments we didn’t have.”