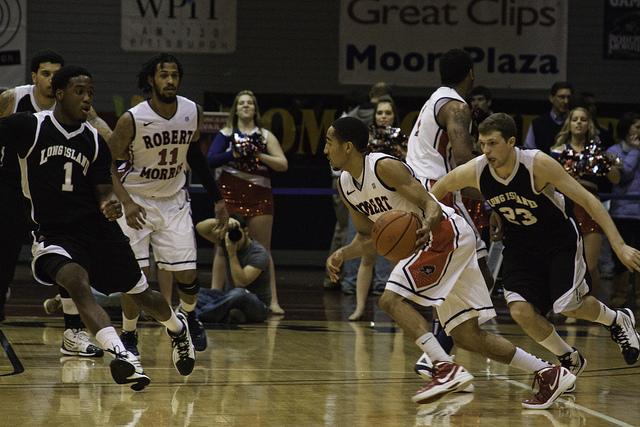 It was a tale of two halves for the Robert Morris men’s basketball program’s contest against the Wagner Seahawks.

During the first 20 minutes of play, the Colonials jumped out to an early 18-4 advantage, and led by as many as 21 points late in the period, but a surging Seahawks squad battled back in the second half and eventually forced overtime. RMU however, held strong and was able to escape with an 83-79 victory Saturday night at the Charles L. Sewall Center.

“I don’t think we could have played any better in the first half, and I don’t think we could have played any worse in the second. The thing I’m proud of is that we figured out a way to win the game, and that’s the most important thing,” said RMU head coach Andy Toole. “I think it would have been a devastating loss for us had we not been able to hold on, but we were able to make enough plays to barely hang on.”

Wagner sharpshooters Kenny Ortiz and Latif Rivers led all scorers with 22 tallies apiece, while both Lucky Jones and Russell Johnson each netted 21 points.

Robert Morris, who shot 58.3% from the floor in the first half, began the game on a 10-2 run and eventually cruised to a 40-19 lead after Jones converted a shot from beyond the arc. The Colonials, who scored 17 points off turnovers, went into the locker room up 42-27.

“It was a great team effort [in the first half]. We shared the ball very well, we moved the ball a lot, and guys were hitting unbelievable shots,” said Johnson, a redshirt senior. “We were just rolling.”

Wagner, who began using a full-court press early in the final period, kept chipping away at the RMU lead, and used a 23-9 run to come within two with 2:03 remaining in regulation.

Karvel Anderson drained a three with less than a minute to go that appeared to give Robert Morris the victory, but Ortiz, who scored six points in the final 56 seconds, banked in a layup to knot the score at 73.

The Colonials opted to go for the win on the ensuing possession, but Johnson’s shot from the top of the key rattled out.

RMU played lock tight defense in the overtime period, and as a result, the Seahawks were unable to get a clean shot off. Jones, who was 11-12 from the charity stripe, nailed a pair of free throws with three seconds remaining to seal the victory.

Toole believes that Wagner was able to get back into the contest because his squad wasn’t ready for the press early on.

“Their pressure tonight was extra aggressive, and extra physical and we didn’t handle it very well,” said the third year skipper. “Part of it’s probably because we’ve seen them play full-court man at times, we’ve seen them press on occasion, but going into the game, we didn’t think that that would be their game plan of just full-court pressure on each and every possession.”

Coron Williams, who chipped in 14 points, said the Colonials’ diligence helped them grind out the victory.

“I think we’re fortunate to be 9-3 [in NEC play],” he added. “Going on the road and having to play four of our last six against very good teams is going to take some really good team efforts to get those wins.”