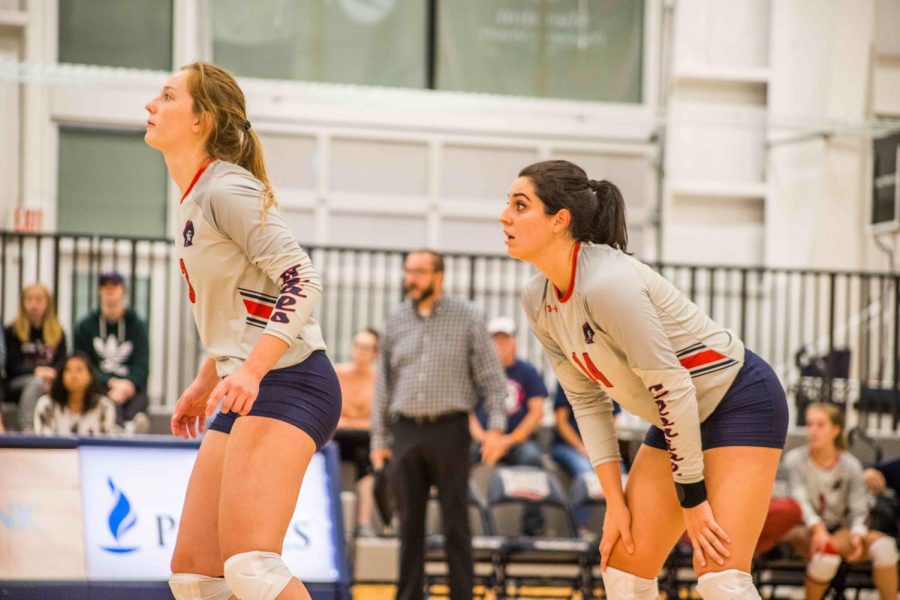 Taylor Lord(right) and Erika Wilt(left) anticipate the next point during their 3-set sweep of the FDU Knights.

Robert Morris continued their dominance in the second set, taking an early 10-0 lead based on several attack errors from Fairleigh Dickinson. The Knights got their first point from a service error by setter Whitney Brown and their first offensive point from outside hitter Erika Sullivan, making the score 13-5. A small comeback from FDU brought the set within 6 points, but Robert Morris prevailed in the set 25-15.

Farleigh Dickinson took their first lead of the match with the first point of the 3rd set, but Robert Morris would take the next point and never give up the lead. The Colonials strung points together several times and back-to-back kills from middle blocker Emma Granger gave Robert Morris the 3rd set victory 25-15 and the match victory.

Senior outside hitter Taylor Lord led Robert Morris with 15 kills on the match. Emma Granger had seven kills, including the final two points of the game, and outside hitter, Alyson Londot had six kills despite only playing in two sets.

Senior libero Allie Yurkovich led the team with 14 digs on the night. Taylor Lord and Freshman Setter Megan Cannon had 13 and 11 digs respectively. Sophomore Setter Whitney Brown had two aces in the match.

Outside hitter Erika Sullivan led Farleigh Dickinson with seven kills on the night. Middle Blocker Nataliya Rybakova had seven kills for the Knights as well. Setter Corina Beimers had 12 digs and Libero Jaelyn Young had 10 digs as well.

Robert Morris will look to win their final four matches of the season as they take on Sacred Heart November 10th at 5 p.m. Robert Morris will also recognize seniors Taylor Lord, Allie Yurkovich, and Liz Campbell before the match. Farleigh Dickinson will look to win their first and final Northeast Conference match against Saint Francis on Saturday as well. Both teams were mathematically eliminated from postseason play coming into the match.