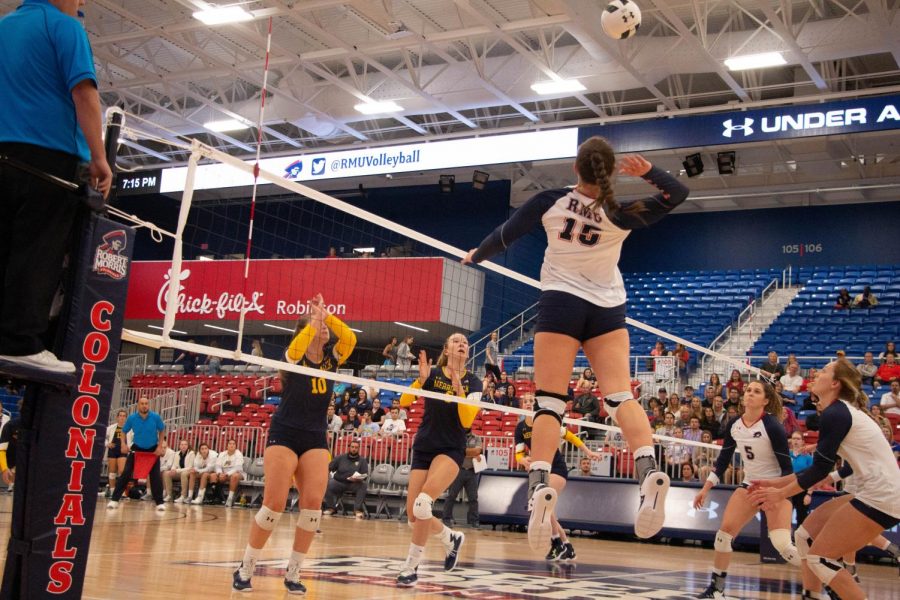 MOON TOWNSHIP– The Robert Morris University women’s volleyball team came back with a purpose in their first conference game of the season. Coming off of a difficult weekend at the Youngstown State Red and White Invitational, RMU’s women stepped on to the court Friday night intending to make a statement with a definitive victory over Merrimack College.

“It was mentally tough,” said RMU sophomore, Nickolette Zanolli, about coming back from YSU’s Invitational.

“We played as hard as we could this weekend. We’re still a little short on girls and looking to get back to full strength,” said RMU volleyball head coach, Dale Starr. “Our goal is to win this thing. We want to win the NEC and host the tournament. We’re expecting to play for a championship.”

Preparing for their game against Merrimack, Zanolli said, “We watched some film, but we really were playing for the players who were hurt tonight and planned to play our game.”

“We wanted to make it a good welcome to the NEC for Merrimack.” she said with a smile. The Colonials did so, winning three straight sets.

New to the Northeast Conference and Division I play, Merrimack came into the first set with a lot of energy, scoring the first several points of the game. For the first couple of volleys, RMU and Merrimack went back and forth scoring.

Merrimack’s lead, however, was short. The tides turned when RMU junior, Emma Granger, served twice with no answer from Merrimack, bringing the score to 16-13.

After that, RMU scored six points in a row with no response from Merrimack. A diving save from RMU junior, Erika Wilt helped win the first set for RMU, 25-17.

If the Colonial ladies struggled in the first set, they came back strong with some hard and fast play in the second. The RMU defense, led by Granger, was a wall that Merrimack could not get past. Several long volleys back and forth resulted in RMU points off Merrimack errors.

Granger led the team this set, spiking, blocking and killing leaving Merrimack with no response to her fast play. Zanolli assisted the team with some amazing slides across the court, saving the volley at the last second. The second set was all Colonials; they won it 25-6.

Coming into the last set, Merrimack started to break down, making more errors and growing increasingly frustrated with RMU’s strong defense. RMU’s sophomore, Alyssa Hudak, played a strong set with fast spikes. Granger was dominant again, but it was the RMU redshirt sophomore, Lauren Kolenik that ended the set, sneaking up from the outside for a spike. RMU took the set, 25-9.

“They played as expected.” said Starr. “Merrimack came out with a lot of energy, and we were a little erratic at the start, but after the first 10 or 15 points we settled in.”

The Colonials were led by Kolenik in scoring. She brought in 17 points for RMU while also leading the team in kills with a total of 14.

“Our defense as a whole did really good.” said Starr. “I wasn’t really pleased with our blocking though.”

RMU had a total of eight team blocks, something they look forward to improving in the next couple of weeks of conference play against Sacred Heart University (5-8) and Bryant University (6-11).

“We need to get a little more consistent with blocking and play all around.” said Granger after the game. “I really need to change my focus for conference play.”

The Colonials head into a tough match at Bryant on Wednesday. They come into the match with a 11-3 record and a new mentality.

“This past weekend was the end of our preseason, but it’s a new season now.” said Zanolli.