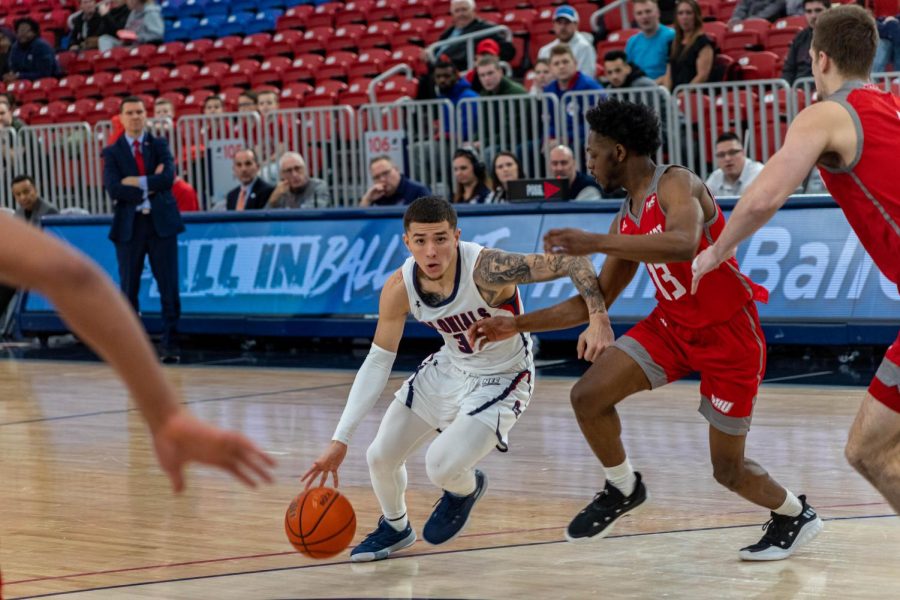 MOON TOWNSHIP– With the NEC basketball schedule nearing the halfway point, the Robert Morris men’s basketball team (10-11, 6-2 NEC) finds themselves in the hunt for the crown of the NEC’s best team and the No. 1 seed in the conference tournament. The Colonials are coming off of a bounceback win over LIU (10-11, 5-3 NEC) and host Bryant (10-10, 2-5 NEC) at the UPMC Events Center Thursday night.
Recapping RMU
Robert Morris has continued to stay in the top three of the NEC standings all season long but will have a tough road ahead to secure their spot at the top. The journey becomes a little easier this week with Bryant in town, a team that has struggled to find success in conference play.

The Colonials return home after their two-game New York road trip with two more at home to close out the week. If coach Andy Toole and Robert Morris hope to stay in contention for the top seed in the NEC, they will need to keep taking care of their own business while needing help from other schools along the way.
Scouting Bryant
The Bryant Bulldogs enter Moon Township and the campus of RMU with an overall .500 record at 10-10, finding less success in conference play with only two victories in seven games.

The Bulldogs suffered a crushing loss at the hands of Mount St. Mary’s (9-11, 5-2 NEC) on the road Saturday, 79-76. Bryant has lost five of their last six games, three losses coming at home in Smithfield, Rhode Island.

The team has an under .500 record on the road and only shoots 66.4% from the foul line, mirroring the Colonials’ poor free-throw shooting at only 65.6%. Bryant needs to bounce back in this game to try and gain momentum in a weak NEC, currently sitting only four spots from last place.
Players to Watch
Josh Williams (Robert Morris)

Williams has been a solid player once again this season for Robert Morris. The senior guard has proven to be one of, if not the best players on the team throughout his RMU career. He is averaging 14 points per game in 2019-20 with 4.3 rebounds a game and a very impressive 41.6% from deep. Williams will need to continue to be a star presence for the Colonials and continue his senior season on a high note on Thursday night.

A.J. Bramah has also been a great player for Robert Morris and has improved his play every game in NEC competition. Bramah, the team leader in both rebounds and field-goal percentage, recorded 20 rebounds earlier in the season against Sacred Heart (12-9, 5-3 NEC). He will be looked at on the defensive side of the ball and be a clutch performer as he has shown he is capable of.

Senior guard Adam Grant has been a force on the offensive side of the ball all season long for the Bulldogs. The only player to start all 20 games, Grant has averaged a team-high 18.6 ppg, shooting 42.2% from the field and 71.4% from the free-throw line. He will need to lead by example and be a force to be reckoned with if Bryant is going to pull off the upset.

Only a freshman, Lin has started the third-most games on the team with 12. He owns a 38.1% mark from the field and shots 72% from the foul line. Benson Lin will need to play a key role for the Bulldogs on Thursday.
Prediction
Robert Morris men’s basketball comes home after an up-and-down road trip to New York and will look to regain comfort this season at home. Bryant presents an interesting test for RMU, with nearly similar figures in almost all statistical categories.

In the end, the better team will come out on top and it helps that the better team is also playing at home Thursday night. The Colonials will take care of business and continue their goal of getting back to the top of the NEC conference standings.