Colonials roll to ninth consecutive victory with win over CCSU 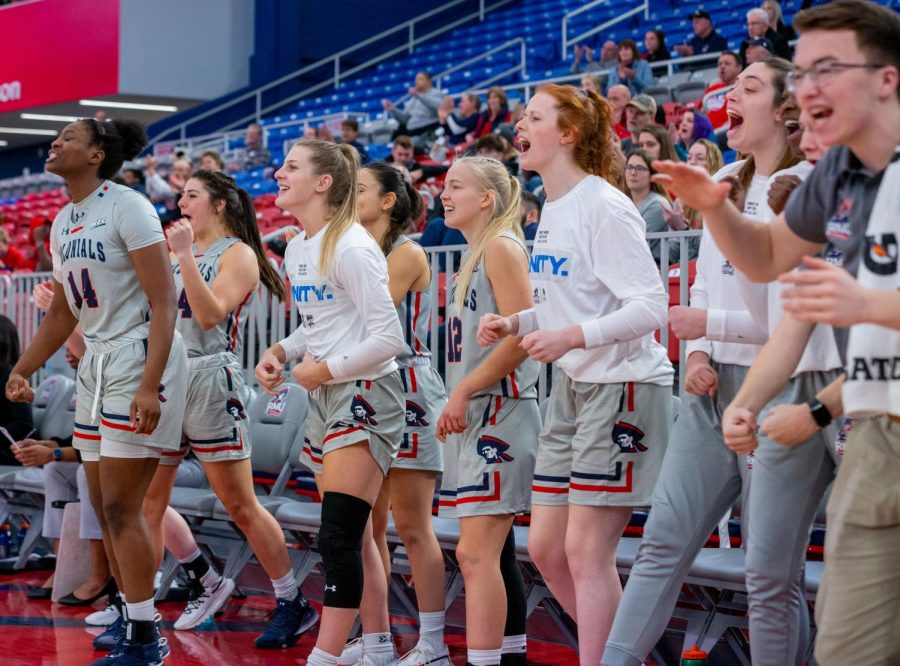 MOON TOWNSHIP– The Robert Morris University women’s basketball team (14-6, 9-0 NEC) kept their record clean in 2020 with their 80-42 victory over Central Connecticut State University (2-16, 1-7 NEC) this Saturday afternoon. Four Colonials finished with double-digit points in the game, which was not as one-sided as the final score indicates.

The Colonials came out strong in the first quarter as Nneka Ezeigbo put up eight of her 14 total points to give RMU a 21-10 lead after just 10 minutes of play. The focus to get the ball inside was perfect for the Colonials as they dominated the boards, especially in the offensive zone, where they finished with 18 offensive rebounds.

With rebounding being a focus coming into today’s game, head coach Charlie Buscaglia was happy with the team’s performance saying, “We have to be accountable and… not just crash in but be smart where you’re crashing in, where the ball may go [to]. We did a good job at anticipating the ball off the rim [today].”

Also on rebounding, Ezeigbo said that “[You have] to have that mentality and heart to go after the ball.”

However, the Blue Devils pushed back heavily in the second quarter as they outscored the Colonials 19-13 and brought the lead way down to two at one point. They only trailed by five points going into halftime.

Dahomée Forgues, who led the team in scoring with 15 points, tying her career-high, said that the biggest struggle was their defense saying that, “Our defense was the main problem, and that’s what brings our offense.”

“[CCSU] was doing a great job doing some things defensively to throw off our pace a bit… we were off on hitting open shots, and we needed to tighten some screws on defense off the pass. You cannot allow missed shots in the first half to take you away from who you are and what you work on every day,” said Buscaglia. “That was the big challenge at halftime, to tighten up a few screws defensively, and offensively we had to come out and play free.”

The Colonials did just as coach told them to, dominating the rest of the game; CCSU scored only 13 more points the entire second half, including just two points in the fourth quarter. This defensive showing was spurred on by RMU’s pressure on defense, forcing 11 steals and 23 total turnovers by the Blue Devils, which RMU turned into 29 points off of turnovers.

“We did a good job of communicating better in the second half, especially in transition, and really locking into the different [plays] they were throwing at us. We caused those turnovers by working hard, not by hoping they were going to throw the ball to us, and [that] allowed us to take the ball the other way and get some early offense going,” said Buscaglia.

In terms of offense, RMU scored 46 second-half points thanks to Forgues, Ezeigbo (14 total points), as well as Ire Ozzy-Momodou (10) and Laura Carrasco, who scored an insane 14 points in just under eight minutes of playtime. Carrasco said of her late flurry of scoring, “I think I was just mentally ready to get in the game, and coming off the bench and [converting] everything I got from my teammates.”

Forgues kept things simple when talking about her performance commenting only that, “I come ready to play every day, [sometimes] I have good days and sometimes I have bad days. Today was a good day.”

Despite the fact the Colonials have not lost in over a month, Buscaglia still sees the need for improvement in the team’s play. “There’s tons of things [we need to improve on], we have to stay hungry, stay very humble… you can’t allow winning to bring you down when it comes to your accountability and to stay in the moment. Obviously, the moment is to enjoy the win tonight but tomorrow come in and go back to work,” said Buscaglia.

The Colonials will put their perfect NEC record on the line once again on Monday when they face the Bryant University Bulldogs (5-14, 3-5 NEC).