Colonials run away late with key conference victory over Bryant 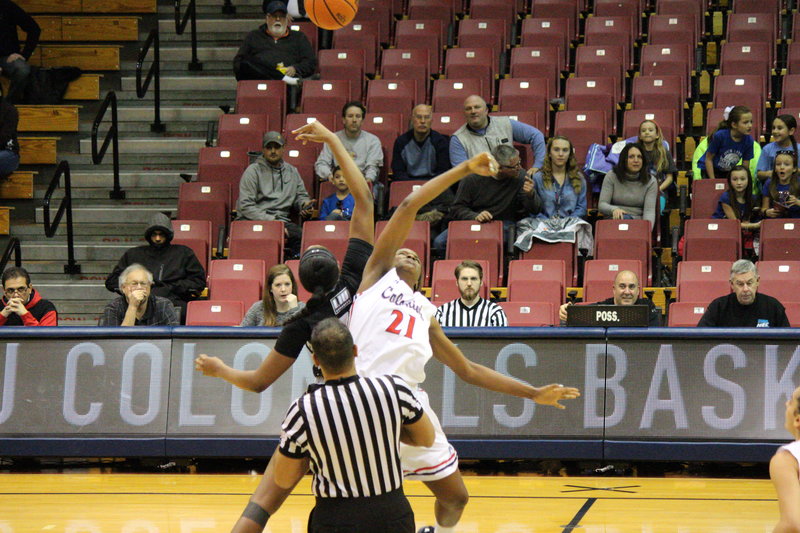 In a physical and highly anticipated conference match-up between the Robert Morris Colonials (9-9, 4-3 NEC) and the Bryant Bulldogs (9-9, 4-3 NEC), it was RMU who walked away victorious with a 62-46 victory to move to 4-3 fourth in the Northeast Conference.

It was tightly contested for the entire first half, with neither offense able to put up any significant numbers. The Colonials were limited to 7-for-36 from the field, while the Bulldogs also went into the locker room only shooting 6-for-21.

Robert Morris’ superstar Anna Niki Stamolamprou was limited to a mere two points in the first half, as she remained 12 points away from claiming third place on RMU’s all-time scoring list.

“They played really hard, and they did a good job of contesting a lot of our shots,” said head coach Charlie Buscaglia. “And they were playing that zone, which was doing a really good job of mixing us up.”

The Colonials, who led the NEC in points per game and point margin, were on pace for their worst offensive performance of the season when they needed their shots to fall the most.

Robert Morris needed to find answers and return to the style of play that had seen it put up 83 and 82 points, respectively, against LIU Brooklyn and Wagner.

And whatever Buscaglia told his team during halftime, it definitely seemed to work.

Robert Morris came out firing on all cylinders. Stamolamprou took 10 shots over the rest of the game and sunk seven of them. She finished the day with 20 points and a third-place spot among some of the best shooters in the history of Robert Morris basketball.

“This scoring milestone is great… a lot of it has to do with the mentality,” said Buscaglia. “Accepting the challenge of what most players say they want, but she really did.”

Another milestone in what has been a season of records for the senior guard.

The Bulldogs were outscored 44-29 and out-rebounded 15-13 in the second half. They only managed a 29.2 field goal percentage, compared to the Colonials who shot 64.3 percent.

“(In the first half) we couldn’t finish around the basket, and when we did that in the second half, we scored that many points and we got the W,” said Stamolamprou.

The Colonials host the Central Connecticut State Blue Devils on Jan. 23 at 7 p.m. in the Sewall Center.

CCSU is trying to bounce back from its first NEC loss of the season in order to remain in first place in the conference. Robert Morris, meanwhile, looks to play spoiler and continue its climb up the NEC standings and into the conference tournament.