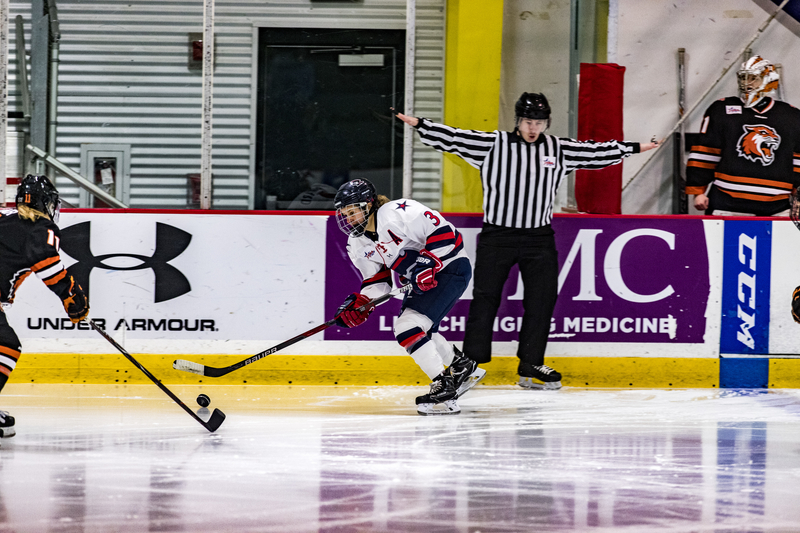 After a tough 1-0 loss Friday night, the Robert Morris Colonials came back with a 2-1 win Saturday night on a cool December evening.

This was the Colonials’ 11th win of the season, and it took them all three periods to do it. The game-deciding goal was scored almost 14 minutes into the third period, and it was an Amber Rennie wrist shot that blew past the blocker of Mercyhurst goaltender Kennedy Blair and into the back of the net.

This win for RMU split the weekend series between the two teams at a game apiece.

5:39 into the first period, Mercyhurst’s Maggie Knott was sent to the box for checking. Once the Colonials were on the power play, it did not take them long to get on the board. Kirsten Welsh pounded home a shot from the point to give RMU their first lead of the game. This goal was set up by seniors Kathrine Murphy and Brittany Howard, as Welsh was able to one-time a clapper past Blair.

It did not take long after the start of the first period of play for the Lakers to even the tilt, as Knott slotted home the game-tying goal two minutes into the period. The goal was assisted by junior Vilma Tanskanen and senior Jennifer MacAskill as the Lakers successfully worked the puck out from below the goal line and into the front of the net. It was there that Knott received the puck and was able to knot the score up at one apiece.

Finally, Rennie Broke the tie with her 10th goal of the season. The goal earned the Colonials a win in a game that Rennie thinks showed the team’s “great character” by the way they have bounced back from losing on Friday two weeks in a row.

He then added that the team added more puck possession and worked harder to find the shooting lanes, but he then mentioned that his team missed the net quite a bit.

Colontino also added that the team is physically and mentally tough because of their bounce-back wins the past two weekends, noting that RMU was unable to score yesterday, but they were able to come out and score early in the contest Saturday night. He also mentioned that the defense was vastly improved from Friday night. Colontino said that they were a big factor in the offense in this “bounce-back” performance, and he was especially happy with Welsh’s goal and the fact that she positioned herself in an area where she could one-time the puck.

As for the goaltending over the series, Colontino was very impressed. He mentioned that Milne-Price was “awesome” between the pipes and he mentioned her composure in net, saying that she was “phenomenal.” He then added that there were two “great” goaltenders during the weekend and that he was happy that the Colonials goaltending was a little better on Saturday night.

Going forward for the Colonials, they will travel to New York to take on Colgate next Saturday before a lengthy break. They will then return to action on Jan. 5 when the Syracuse Orange make the trip to Neville Island for a weekend series.