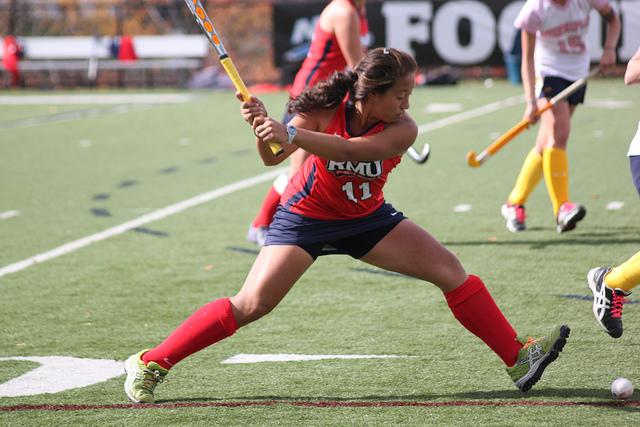 Just nine contests into the 2013 campaign, the Robert Morris field hockey program accomplished something that last season’s squad could not achieve in a full 18-game schedule.

Led by freshman Chloe Mcllwaine’s two goal performance against the Towson Tigers Friday at Joe Walton Stadium, RMU posted its sixth win of the year, which is one more than the program had all of last season.

“Last year we had a lot of sophomores and freshmen playing, and those freshmen got a lot of experience, so going into the spring, we knew what our goals were,” head coach Olivia Netzler said. “Everyone has worked really hard, so going forward, and going into conference, we’re just really focused, and we know we want to come out and just give our best.”

The Colonials, who are off to the program’s best start, dominated the both sides of the ball. Despite outshooting Towson, 12-4, in the first half, RMU only held a one goal advantage at halftime, thanks to Taleah Scot’s third tally of the season.

However, Robert Morris went on an offensive surge in the final half, netting three goals in a span of thirteen minutes.

Because of RMU’s defensive duo of Marzana Fiedtkou and Michelle Lewthwaite, the Tigers were held to only four shots in the game, enabling junior goalkeeper Erin McKenzie to secure her fifth shutout of the season.

The Colonials will look to use the momentum from their win on Sunday, when the Ohio Bobcats travel to Moon Township.

“Every win sort of builds momentum with the girls. Every day we come out, we try to win, and at the moment, we’re 6-3, but we need to keep carrying over,” said the seventh-year skipper. “Sunday is going to be a tough game. I think it [victory over Towson] prepares us, but I also think we’re going to have a bit of defensive pressure, which we didn’t have today.”