Colonials skate to tie with Lions 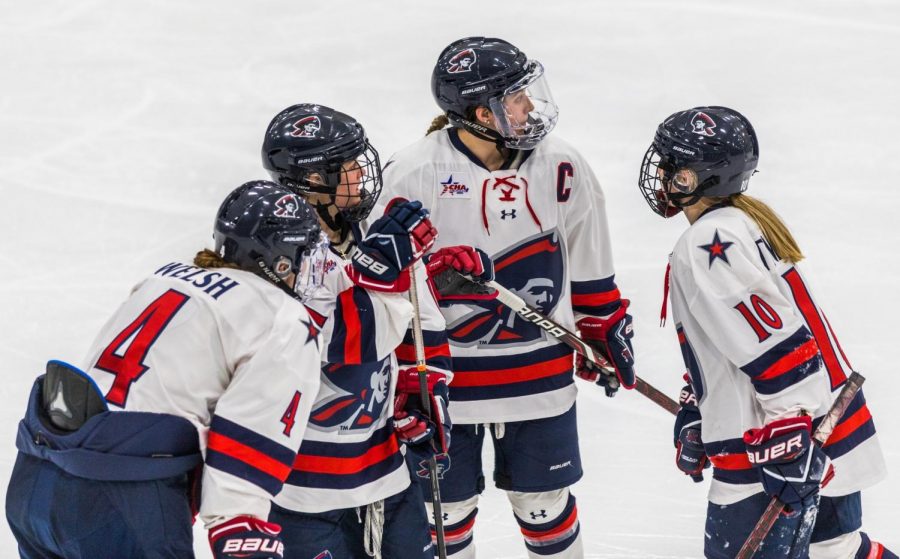 PITTSBURGH — The Robert Morris Colonials women’s ice hockey team (3-5, 1-1 CHA) were looking to give their fans an early Halloween treat on Friday afternoon at Colonials Arena. The Colonials were coming off a split with defending CHA champions Mercyhurst, losing game one 4-2 last Friday night, before they stormed back with a dominant 5-1 win in game two, the most lopsided win in the history of the series with the Lakers.

Jaycee Gebhard had the hot hands coming into the contest, with a team-leading 10 points to start the season (four goals, six assists). Facing the Colonials at the other end of the rink were the Lindenwood Lions (1-5, 0-2 CHA) who were looking to get their first win in conference play after falling in their first two CHA match-ups, both against the Syracuse Orange, losing game one 5-4 in overtime and game two by a score of 6-3.

The Lions started out hungry for goals in the opening period, as they mixed good physical play to make sure the Colonials did not get any quality scoring chances through to their netminder Jolene Debruyn. The Colonials got off to a bit of a sluggish start, but had an opportunity to go ahead at the 5:45 mark of the period when Lindenwood’s Megan Wagner was sent to the penalty box for an illegal body check. Despite some small generated chances and a penalty shot attempt by Maggie LaGue, RMU couldn’t find the back of the net.

Then, the Colonials found themselves in penalty trouble at the 9:31 mark when Caitlyn Sadowy was sent off for slashing, which allowed the Lions a shot at the first goal of the game. They did just that when Taylor Girard blasted a one-timer past Lauren Bailey at the 11:06 mark to give the Lions a 1-0 lead.

Robert Morris then responded with their own power-play goal with 6:47 left in the period when Lexi Templeman made a nifty move around a couple of Lions defenders and tucked the puck past Debruyn to tie the game at one apiece. After that though, RMU once again found themselves in penalty trouble when sophomore Emilie Harley was sent to the box with 3:34 left on the clock for tripping. The Colonials successfully killed off the penalty, but with a minute left, Harley was again assessed a penalty for tripping. Despite some good puck movement by the Lions, they were unable to beat Bailey and the staunch RMU defense, and the period ended 1-1.

The second period opened with the Colonials trying to kill off the penalty and did so, kicking them into high gear as they generated some key scoring opportunities which included a nice feed that Lexi Templeman made across the crease that just wasn’t able to be finished off. RMU went back on the power play with 14:22 on the clock, but nearly gave the lead back to Lindenwood when a bobbled puck at the blue line sent a Lion free on a breakaway to the RMU net. Bailey stayed strong though, denying the shooter and getting rid of any rebound opportunities.

The second frame was largely all about the net minder’s play for RMU as she made one great save after another, including sprawling across to stop the Lions’ Hannah Alt on what would’ve been a tic-tac-toe go-ahead goal after Emilie Harley was sent off for hooking with 8:03 left on the clock.

The Colonials fought hard and finally got their first lead of the game when captain Amber Rennie jammed the puck by Debruyn with traffic in front. That goal would survive a video review for goalie interference and RMU ended the middle frame ahead by a goal 2-1.

The third period, in contrast, did not start the way the Colonials would have liked. Just over four minutes into the final period, Hannah Alt flew down the left wing in transition and sent a bullet past Bailey to tie the game at two apiece. RMU fought through the rest of the game to try and pull back ahead, but with strong saves by both goalies at either end the game remained deadlocked.

The Lions looked like they would win the game late after Mackenzie Krasowski was sent to the penalty box for tripping. In what was a do-or-die situation for Robert Morris, the team came up big, as they denied any opportunity both in front of the net and from the point from the Lions. Regulation ended in a tie, so overtime looked to possibly settle the score.

In overtime, neither team had any major opportunities to score until 1:18 left, when RMU looked as if they could pull off the late win when Lindenwood was sent to the box. Despite multiple shots at the net, the Colonials couldn’t get the late victory and the game ended in a draw.

Gebhard thought her team “didn’t play the way we wanted to,” despite the tie and felt that the solution for winning the rematch in game two was to simply “up our battle more.” She also noted that the Colonials needed to “pick up players better on the backcheck.”

Goalie Lauren Bailey said that she definitely feels that she’s “gotten into a groove” since being named the starting netminder. Bailey continued to say that despite the attempts she had to deal with from the Lindenwood defenders, she felt that they “did a really good job” getting back.

The Colonials and Lions face off tomorrow afternoon at 1:05 p.m. at Colonials Arena in game two of their weekend series.