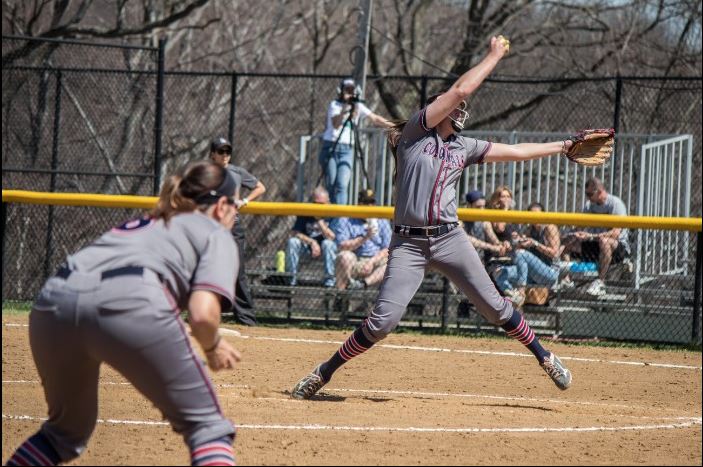 The Robert Morris Colonials and the LIU Brooklyn Blackbirds went to battle at the North Athletic Complex on a sun-filled Sunday afternoon. The Colonials came in looking to stay undefeated in Northeast Conference play in their first game at home. RMU improved to 5-0 in the first game but had a setback in the back-end of the double-header.

Sophomore pitcher Kaitlin Ellzy moved to 5-3 on the season, pitching the complete game after giving up one earned run on six hits.

However, it wasn’t a pretty start to Ellzy’s day. She struggled with command issues in the first few innings. The sophomore walked two opposing hitters in the opening frame but was able to work out of an early jam and limited the damage to only one run that came on a Nereyda Gutierrez RBI-double down the right field line.

Ellzy saw herself in more trouble the very next inning, but she got out of another jam, leaving the bases full of Blackbirds to keep the score at 1-0.

Ellzy’s coaches talked to her during her early struggles and gave her some helpful advice.

“(They told me) just to trust my pitches, to finish each pitch and keep everything quick so I wasn’t behind on anything,” Ellzy said.

The Blackbirds are a team that saw Ellzy last season, but she took a hitter-by-hitter approach in the circle.

“I take every batter the same,” said Ellzy. “I just know that they’re going to adjust to me. Like I said, they are a good team so I’m expecting them to hit my pitches.”

Robert Morris saw a goose egg in the score column until freshman Natalie Higgins took LIU Brooklyn’s starting pitcher Erynn Sobieski deep for a solo home run in the bottom of the second inning to knot the score at one. Taylor Bartlow’s RBI-single to left field later in the inning brought around freshman Briana Bunner for what turned out to be the game’s winning run.

The Colonials tacked on their third run in the third inning when Bunner doubled to left field, scoring sophomore Abrielle McCartney.

Robert Morris held down the fort in the remaining four innings to secure its fifth consecutive win against an NEC opponent with a 3-1 victory.

Roughly twenty minutes later, the two teams headed back onto the field for the second game of the afternoon.

In between games, Dr. Craig Coleman, the Colonials head coach, had a message for his team.

“They (RMU) had a very nice win, these (LIU Brooklyn) are the defending conference champions that we just beat,” said Coleman. “They just needed to keep their same level of energy and keep the same level of focus and comeback and try for a sweep.”

The Colonials scored the game’s first run when senior Jordan Gurganus reached first base on a throwing error, and Bunner made her way to home plate.

However, Robert Morris’ lead evaporated in the top of the fourth inning when Riggle gave up a run and was replaced by sophomore pitcher Laura Coulter with all three bases occupied by Blackbirds.

The very first Blackbirds hitter Coulter faced, senior Kylie Mulholland, took her deep for a grand slam to give the away team a 5-1 lead.

RMU scored a second run in the bottom half of the inning via senior Stacey Capp’s double, scoring junior Kristen Pray and making the score 5-2.

LIU Brooklyn pulled away in the seventh inning, scoring three insurance runs to help it walk off the field with the 8-2 victory.

“There is nothing physical about hitting with runners in scoring position versus not,” Coleman said. “It happens in our sport. It happens to major league teams, so you just move on.”

As the Colonials prepare for their next match-up against NEC foe Saint Francis, RMU has to put the second loss on the back burner.

“We have to forget about this second game, and we got the hottest team in our conference coming up, at Saint Francis on Friday,” said Coleman. “And that’s what we have to stay focused on.”

The Colonials head to Loretto, Pa. on April 14 for double-header action and return home on April 15 for two games against non-conference opponent Bucknell.