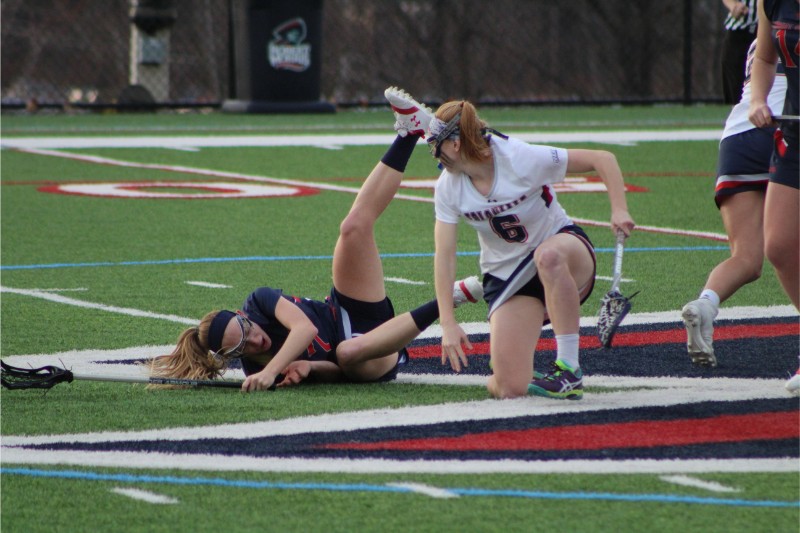 The Robert Morris University women’s lacrosse won their first conference game of the season Sunday, as they took down the Mount St. Mary’s Mountaineers 14-4.

The Mountaineers were the first ones to put their name on the board as attacker Carly Miller banged the ball past Colonial goaltender Katelynn Miller at 27:35 of the first half. Seconds later, Colonial midfielder Sophia Eureka tossed the ball on the ground which made its way past Mountaineer goaltender Jillian Petito.

The Colonials had a chance to steal the lead as the ball fell behind Mountaineers goaltender Petito but was quickly saved by Petito as she realized the ball was near the goal line. Minutes later, midfielder Melanie Gandy spun the ball around to find an open shot and chucked the ball into the net to put the Colonials in a 2-1 lead.

Colonial attacker Shannon Lynch with a great chance to advance lead but hit the top of the goal post. Mount St. Mary’s had a chance to tie the score but was robbed by Colonial goaltender Miller. Midway through the first, Colonial midfielder Sophia Eureka netted her second of the game and put the Colonials in a 3-1 lead. The Mountaineers would follow shortly after making the score 3-2.

Attacker Shannon Lynch opened up the second half with a goal at 28:02 to put the Colonials in a 6-3 lead. Four minutes later, midfielder Madison Griffin would follow with a goal to make it 7-2. Mount St. Mary’s responded shortly after the Griffin goal by attacker Carly Miller to put the Mountaineers back on the board, 7-3.

The Colonials midfielder Dana Davis found the back of the net once again to make it 8-3. Davis is three goals away from netting her 100th career goal. Colonial attacker and midfielder Clio Kerr netted goals back to back to put the Colonials on top 10-3. Sophia Eureka continued her scoring streak as she tossed the ball past Mountaineer goalie Petito to steal the lead 11-3.

Towards the end of the half, Midfielder Dana Davis chucked the ball behind Mountaineer’s goaltender to advance the score 12-3. Davis is now two goals away from 100. Clio Kerr netted her 3rd of the game to make it 13-3 Colonials at 8:23. To end the scoring drought, the Mountaineers attacker Taylor Carhart found the back of the net at 4:46 that put them up 13-4.

The Colonials would win 14-4 by the last minute goal from midfielder Melanie Gandy.

Midfielder Sophia Eureka said the team wanted to forget the game on Friday and get back to their normal selves.

“We wanted to go in and play like ourselves,” said Eureka. “We had a rough game on Friday. We were a little shaken up from that so we wanted to get back to playing our game.”

Eureka scored a hat trick plus one in today’s match and she says she contributes all her success to her teammates.

“Definitely my teammates,” Eureka said. “I think most of my goals were assisted so I couldn’t have done it without them and everyone on the field.”

Not only was the offense playing well, but the defense was better than previous games. Defender Kelly Colegrove said the defense wanted to come out and establish themselves in today’s game.

“We only had two goals in the first half and two in the second and scored 8-meters so it was awesome to hold them to that,” said Colegrove.

The defense forced the possession clock twice that really helped the defense throughout the game.

“It’s really awesome but it kinda sucks when they get a new 90 but I think we held them great for a couple times and got the ball”, Colegrove said. “We were down two players on defense and we still held them and got the ball back so that was really exciting”.

Working together and staying consistent is what the Colonials did well to grab the 14-4 victory.

“Everyone played well together,” Eureka said. “We wanted to get back to playing our brand of lacrosse and working together is a big part of that.”

The Colonials are away next Friday at Saint Francis University at 4 pm. and then again April 20 at Bryant at 3 pm and April 22 at Central Connecticut at 12 pm. Robert Morris will be back home April 27 as they host Sacred Heart at 3 pm.