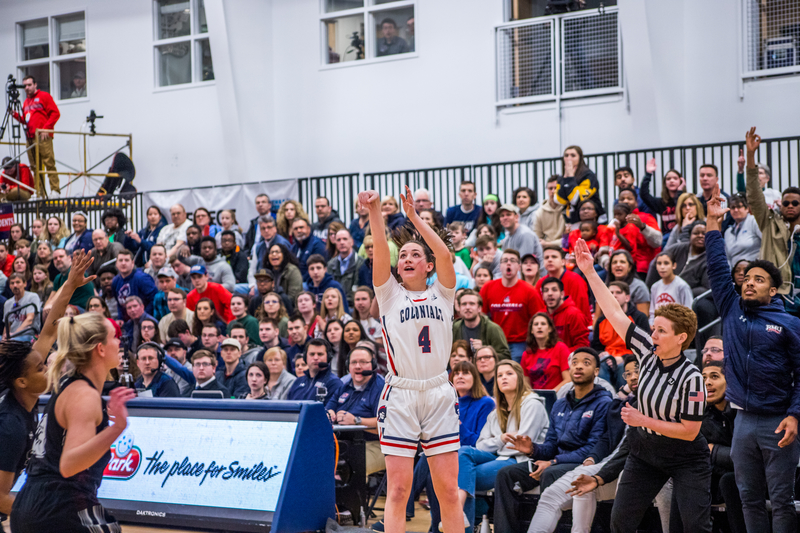 It was a full 40-minute effort from Robert Morris University as the Colonials jumped to an early lead and did not look back, never giving it up for the entirety of the game. The majority of the Colonials’ offense came from inside the paint early, as Nneka Ezeigbo jumped out with seven points in the first quarter.

When asked about his team’s effort inside the paint, Coach Buscaglia said “We’re posting up strong in there, we have to be great passers, we have to space the floor out. We did a good job at mixing things up… you have to do different things to the defense.”

As Ezeigbo cooled off from a hot start, Irekpitan Ozzy-Momodou came alive, with five points in the second quarter. Buscaglia said of Ozzy-Momodou and her impact since returning from injury, “[She] is somebody with a lot of ability and she can do some really good things for [our] program on both ends of the floor. A lot of times when you’re big, [you play] inside and that’s all you’re told to do, but she can do more.”

Thanks to her efforts, RMU took a 37-28 lead going into the half, but it was the second half where the Colonials truly found their game. Once again, Ozzy-Momodou continued with her strong play into the second half but found help from Isabella Posset and Natalie Villaflor in the offensive end.

Posset made all four of RMU’s three-pointers in the match and finished with a season-high of 16 points. Of how she found success from the outside, Posset said, “We can’t just feed the ball inside for 40 minutes, we have to get the ball moving on the outside which will open up… down low. Being able to knock down those shots [today] really helped the team out.”

As for Villaflor, her 10 points gave her a third double-digit performance from the bench, including both games against Merrimack. When asked about how RMU has exploited the Merrimack defense to her benefit, Villaflor responded that “Our ball movement has allowed us to get to the open areas, and our guards finding the posts well.”

She also expounded upon the importance of getting the bench involved in the game, as their 34 points today proved to be key to victory. “It’s important to carry the energy the bench [provides] during the game and not letting that [wear out].”

The score was kept close until the end of the third quarter and into the fourth as the Colonials truly pulled away.

Ozzy-Momodou put up another seven points in the fourth quarter, and she finished the game with 17 points and 17 rebounds, her first double-double this season. Of her performance, Ozzy-Momodou said, “Our resilience, despite our low-points, and consistency and communication was key.”

She was one of four Colonials to finish with double-digit points, which really put away Merrimack.

Things went from bad to worse for the Warriors as RMU’s lead got as high as 24 points in the last minute of the fourth quarter. Despite only playing three minutes, 13 seconds in the game, freshman Trinity Papamandjaris put up a career-high five points and end the game with a monster block to which the crowd and bench erupted for.

With their 72-50 win, the Colonials moved to 5-0 in the NEC and have won their past five matches. On how they’ve played during this great stretch, Coach B said that “We take things one game at a time… next game, next moment, we don’t really look at [the standings] because that’ll sort itself out, we just focus on our next opponent.”

Posset remarked that “We’ve stayed focused, haven’t… let these wins get to our heads, we still have to come to work every day and be prepared.”

When asked on how they hope to continue the streak, Ozzy-Momodou responded that “Coming to practice regularly, not being too high or too low from our performance… when we get to practice [we feel] like the next game already started.”

The Colonials will only have one day off before their next matchup this Monday against Sacred Heart University’s Pioneers (6-10, 3-2 NEC).