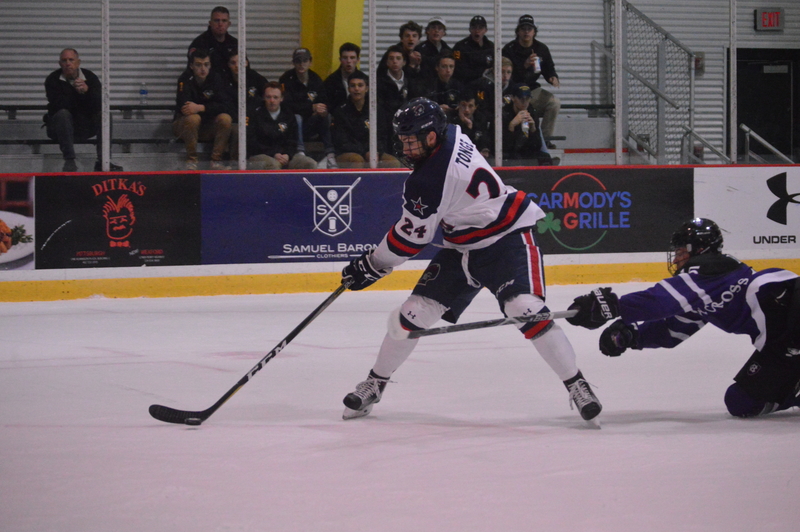 After a 5-5 tie against Holy Cross in the opening game of the weekend on Friday, the Robert Morris men’s hockey team knocked off the Crusaders 3-0 on Saturday.

RMU scored twice in the first period to set the tempo for the rest of the game. A hard-hitting second period produced no goals, despite some good opportunities. Then, shortly after the halfway mark of the third period, the Colonials scored for a third and final time to secure the victory.

The Colonials had a few good scoring chances early on in the first period, and they were finally able to capitalize when center Spencer Dorowicz scored about six minutes into the period.

Goalie Francis Marotte then made some key saves to hold the lead during the penalty kill. He then turned away a shot with 6:45 left in the period during a brief two on one.

Shortly after the big save, Ryley Risling netted his first career goal and extended the Colonials lead to two goals heading into the second period. Assists came from Sean Giles and Michael Louria, who dished out his second assist of the game.

The second period saw a wraparound shot from Brady Ferguson get stopped, and a great defensive effort during the Colonials’ two penalty kills. Marotte also made a handful of big saves during the penalty kill as well.

Luke Lynch scored RMU’s third goal of the game later in the third period off of assists from Matthew Graham and Spencer Dorowicz. This was second point of the night for Dorowicz and Graham. This all but sealed the victory for the Colonials.

Holy Cross had no answer for the Colonials as Marotte turned away all 27 shots en route to his first shutout of the season, Robert Morris scored three times on 26 shots. Three RMU players had two points during in the 3-0 win.

“We did the little things right tonight,” said head coach Derek Schooley about his team’s performance. Schooley also commented on Marotte’s performance saying, “He made the saves he needed to make and threw a few big ones in.”

Alex Bontje echoed his coach’s words stating, “I think it was the little things,” when asked what led to the great offensive production this weekend.

Robert Morris finished this weekend with a big win and a tie on Friday. Their record now sits at (3-5-1; 3-3-1 AHC). The Colonials will head to RIT next weekend before returning home for the November 17th and 18th weekend to take on AIC.