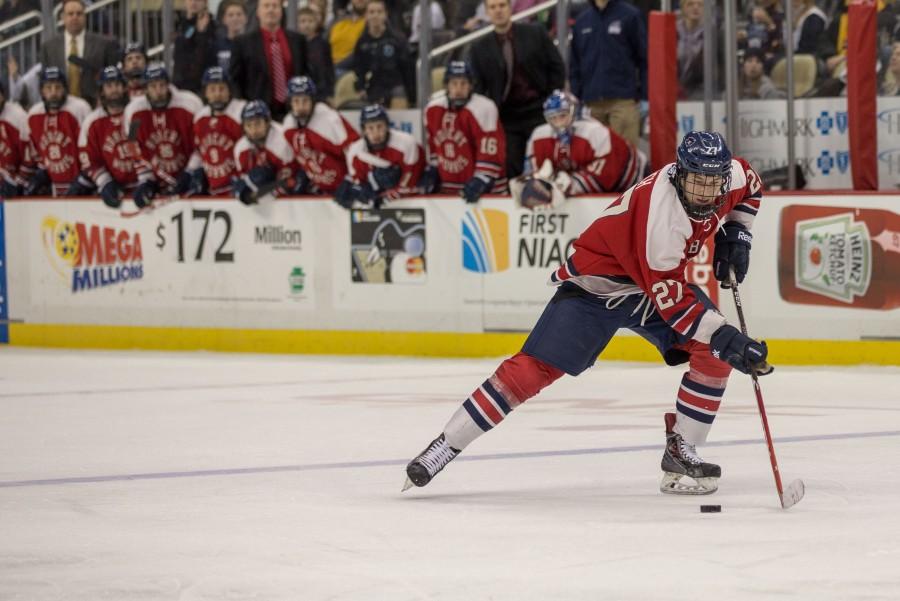 Two casualties highlighted the battles waged in 84 Lumber Arena on Friday evening. While having Military Appreciation night, the Robert Morris Colonials came to tie with the Mercyhurst Lakers, 2-2.

Ending in a tie rather than going to a shootout is something special to college hockey alone, and something neither team appears to want. Terry Shafer, the Colonials goaltender, highlighted his frustration with the system in place after the game.

“Ties suck. I don’t think either team is very happy right now with a tie,” said Shafer. “It’s one of those things, that’s the league rule. If you asked, I’d say probably 99% of players and goalies and coaches would probably want the shootout. Start creating a three point game, something like that, you know. It’s unfortunate, it’s something that you hope to see change. I think it leaves a sour taste in everybody’s mouth when you tie. It’s supposed to be a game of wins and losses, it’s frustrating to battle for 65 minutes and you don’t get a result. I think that’s a change that hopefully you’ll see coming to Atlantic Hockey sometime soon.”

The casualties came later in the game, both in the third period to be exact. First, about eight minutes into the final frame, Lester Lancaster left the ice with an ice pack held to his right wrist and did not return. The ensuing battle yielded offsetting minors.

“I think we have to control our emotions, but you know, it’s tough when you’re being baited by the officials,” said Colonials head coach Derek Schooley. “And the officials are yelling and screaming back at you, and initiating stuff.”

Coach Schooley declined to comment on what he meant by the referees baiting the players.

Later, into overtime, Derek Barach was hit hard near the boards away from the play, and no penalty was assessed. Barach struggled to his feet, and his eyes looked clearly lost as he wobbled to the locker room, held up by two of his teammates.

In terms of scoring, the game seemed to bounce back and forth. Robert Morris was clearly in control for the beginning of the game. Within the first 90 seconds, they had already scored. Zac Lynch took the puck at the offensive blue line, crossed past a defender to his backhand and dragged along the baseline. He cut to the front of the net, shot, and the rebound bounced high overhead. Losing it in the lights, Adam Carlson simply sat in his butterfly as it landed behind him and just beyond the line for a goal.

The next goal came later in the period, with just under six minutes remaining. Timmy Moore settled with the puck at the point, stalling as the defenders called for the pass. Two defenders for Mercyhurst jumped toward him, recovering for a mistake in leaving him open for so long. He fired a snapshot toward the net, which Brandon Denham tipped to the blocker of Carlson. It settled just behind him, and Denham lunged for the shot, swiping the puck into the net for a 2-0 lead.

The second period was the control period for Mercyhurst. Freshman center Chris Makowski seemed to be in the right place at the right time for them frequently, including early on with a turnover in the defensive zone for the Colonials resting on his stick in the slot. Terry Shafer made the save, making it look easy, however.

Just over five minutes into the period, a shot from the left came in on Shafer, who stopped it with his right pad. The rebound settled into the crease, however, and a hard rush by Mercyhurst had it pushed in. Shafer reached his glove out and held it, but it appeared both were pushed in. Derek Schooley chose to challenge, however, and won the challenge as it was ruled no goal.

With just over three minutes remaining in the period, Mercyhurst got a surprising goal. Jeremy Wu had the puck at the left side along the blue line and passed off to Tommaso Bucci. He settled it, and rifled a quick wrist shot past a five-man screen. A noise of a deflection deafened the crowd, while it just glided past the blocker of Shafer to cut the lead in half. Shafer admitted after the game he didn’t get a piece of it, but was told it may have gone off a defender’s shin.

Carlson showed incredible technique in the third period again, battling hard to keep his team in the game. Zac Lynch on the penalty kill managed a tough breakout and had a clear shot on the open net. Carlson dove out for the save, holding his glove to the post and managing to keep the puck out. In the process, the net came off the bearings. It had done so an uncountable amount of times throughout the evening.

Chris Makowski was again a force in the third period, and managed to score for Mercyhurst after receiving a pass in the slot and rifling a shot on goal. It appeared deflected, possibly off a defender’s elbow or a forward’s arm, but ricocheted past Shafer’s outstretched glove.

Many other opportunities came, but none seemed to materialize. The crossbar was hit a couple of times, and the game ended in a tie. The two teams will look to break the tie in their game Saturday evening, once again at 84 Lumber Arena.