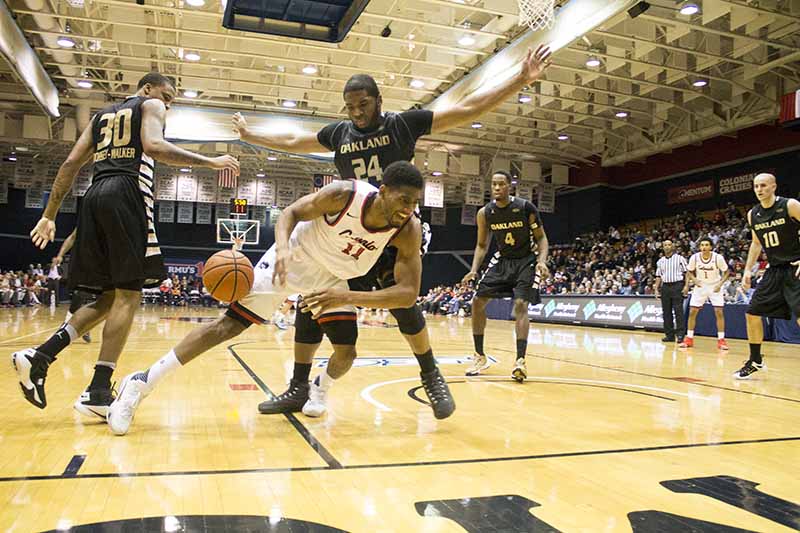 Pryor in action against Oakland during the 2015-2016 season

Pryor has played the past six games after sustaining a concussion in January, but he has not quite returned to the form he had at the beginning of the season when he nearly averaged a double-double.

Although Pryor finished with 14 points and 10 rebounds, he could not make up for lack of size down low and his team’s “mental breakdowns” on defense, per head coach Andy Toole.

The Colonials were out-rebounded 35-31 in the contest, and gave up nine 3-point shots while only knocking down 4-of-21 themselves.

“For three days, we work on (rotating on defense),” Toole said. “And then the first play, like you’re not tired yet. You are not nervous yet, you should be fresh. The first play, we break down.”

Mental mistakes plagued this Robert Morris team which constantly fails to convert open opportunities, especially from the outside. Toole noted that the Red Flash were fully aware of his team’s poor three-point shooting, so they just backed off and let the Colonials beat themselves with bad shots.

Freshman guard Isaiah Still was inactive for the game due to a “violation of RMU athletic department policy,” which will also extend two additional games, Toole said. That was a huge loss to a team who had difficulty scoring, being that the reigning NEC Rookie of the Week had averaged 22 points per game in the past three contests.

“We missed (Still) obviously,” said forward Billy Giles. “With or without him, we knew it was going to be a battle. But having him on the floor is definitely a plus.”

Robert Morris came out with a lot of energy, which was something Toole said was lacking up to this point in the season. The team took an early 16-10 lead as two Matty McConnell threes sparked the Colonials.

McConnell had an “extra pep in (his) step” to start the game as his older brother, Philadelphia 76ers’ guard TJ McConnell, was inside Charles L. Sewall Center to watch him play for the first time all season.

“Yeah, it’s always nice to having him here,” McConnell said. “I probably haven’t seen him in four or five months, so it was nice looking up in the stands and seeing his face there.”

However, as is the case when only eight players take the floor, RMU could not maintain that same intensity on both sides of the ball and relinquished the lead, eventually trailing at halftime, 38-29.

Again, Robert Morris fought its way back into the game, outscoring Saint Francis 15-3 in the first eight minutes to take a three-point lead. But a quick and-one-layup at the other end by forward Ronnie Drinnon “sucked all the energy out of us (Robert Morris),” according to McConnell.

SFU then went on a 16-5 run over the span of seven minutes to put the game firmly out of reach. The Colonials could not knock down outside jumpers, while the Red Flash made the most of their opportunities.

“It’s just about coming out with a consistent effort as long as coach has me in there,” Drinnon said. “Being relentless on the boards, that’s where I think I can help this team. As a senior leader, I know that I need to come in and get on the offensive and defensive glass.”

The Colonials will next travel to take on Fairleigh Dickinson on Feb. 13 for a 6 p.m. match-up.