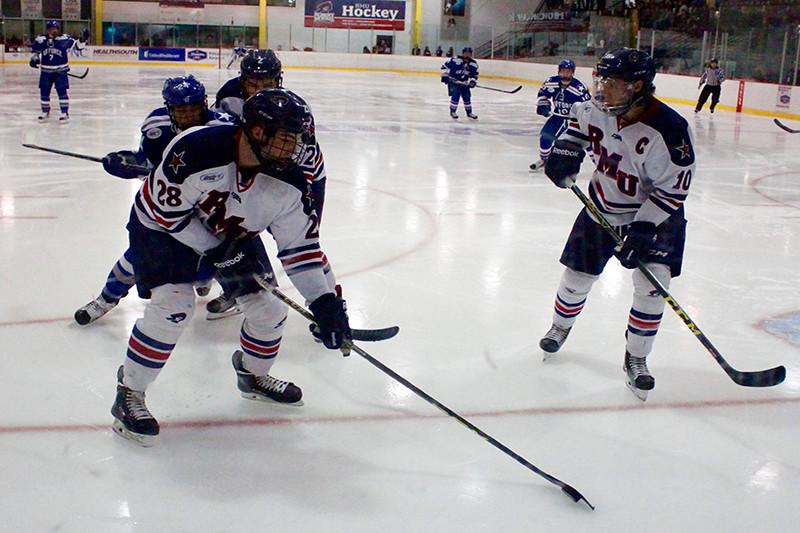 Robert Morris’ men’s hockey team completed a sweep over Bentley last weekend, prior to the return to class for students. Now back to class, the focus returns to taking tests and completing papers. However, the Colonials are forced to focus on a big match-up coming this weekend.

On the 15th and 16th, Robert Morris travels to Holy Cross to take on their toughest competition for first place in the Atlantic Hockey Conference. Robert Morris enters in first place with a 10-3-3 conference record and 23 points, while Holy Cross is 10-3-1 with 21 points.

While the Colonials could afford to drop a game to Holy Cross and split the series, a complete sweep would put them a full series out of reach of the Crusaders in the standings as we near the finish line.

Holy Cross, however, has been on a hot streak. They are 12-3-4 in their last 16 games, going winless prior to their run. Sophomore forward TJ Moore leads the team on that streak with 16 points in those 16 games. Sophomore goaltender Paul Berrafato has gone 11-3-1 in that streak with a .928 save percentage and 1.88 goals against average.

Robert Morris on the other hand has gone 6-4 since the start of December, including two losses just a weekend prior to their sweep over Bentley. The sweep over Bentley could be a launching point, however. Senior goaltender Terry Shafer was named Atlantic Hockey Association Goalie of the Week last weekend after stopping 75-of-76 shots against Bentley. His season save percentage is now .931, and goals against average is 2.47. He’s been streaky, but he could be on the upswing.

The Colonials also enter the weekend with hopes of making it back into the national rankings. The USCHO Poll has the Colonials with 65 votes going into this weekend, just 6 points behind 20th-ranked Rensselaer. Holy Cross has 10 votes heading into the weekend’s games. With a good weekend, Robert Morris could find themselves climbing into the rankings again.

The last time the Colonials were featured in the rankings was November 2, 2015, when they made it to 20th with 75 votes. They fell to American International the following Friday 3-2 to drop out of the rankings, but have been making the climb back recently.

After the weekend trip, Robert Morris returns home next weekend for a series with Mercyhurst, who is tied for fourth in the conference.