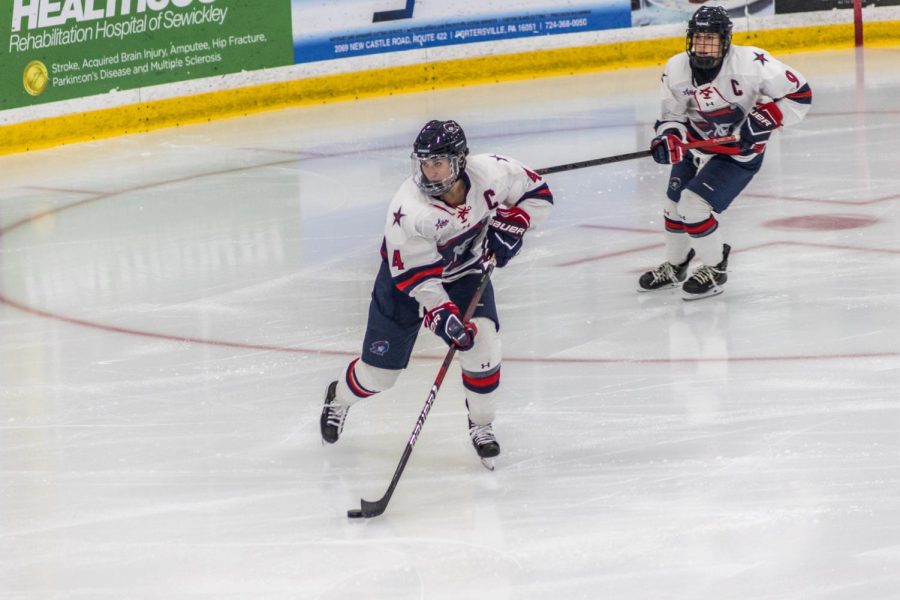 The first period of the game didn’t see too much action from either team, with Cornell registering just seven shots on goal and RMU registering an even lower four shots, one of which was on a power play. Cornell was the only team in the first period to see the inside of the penalty box with Paige Lewis getting two minutes for high sticking.

It was during the second period that the Big Red were able to get a goal past RMU goalie Lauren Bailey. The goal came from O’Neill with assists from Jaime Bourbonnais and Maddie Mills.

The Colonials were able to answer back less than a minute later with a goal from Amber Rennie with an assist from Jaycee Gebhard and Lexi Templeman. This tied the game at 1-1 with more than 10 minutes left in the period.

A minute later, Cornell was able to score two goals within 45 seconds of each other and put them above RMU 3-2. O’Neill was able to get her second puck past Bailey before being followed up by another goal from Willow Slobodozian.

The Colonials weren’t able to get another puck in the net going back to the locker rooms with a two-point deficit and one period left to catch up.

“I feel like our team is starting to get a name for being third period comeback kinda underdog team and I think when we had our backs against the wall like this its really when your colors start to show and our team is really hardworking and didn’t want to go home with a loss and I think that was the biggest factor,” said Curlett.

After 10 minutes of play in the third, Curlett was the Colonial who found herself hitting the back of the net right off of a faceoff win.

“Honestly I’ve been waiting a long time for an opportunity to capitalize on something like that,” said Curlett. “Sometimes it’s a mind game but it was mostly just, ‘I can do this, I believe in myself,’ and when you have that belief in yourself sometimes you pull through.”

With one point left to tie the game, Curlett again was able to get the puck and score to tie the game at 3-3 with 4 minutes of play left in regulation.

“I love the way the team plays when our backs are against the wall, What I hate is being with our backs against the walls. But when you see the way the team responds as a group to pressure situations” said Coach Paul Colontino. “You can’t coach that. You can’t coach that kind of pride that kind of mentality that willingness to compete in tough situations.”

Neither team was able to make much happen for the rest of regulation sending the game to overtime.

Overtime also saw not a lot happen with neither team getting a shot on the net more than three times.

“The past few games we have had to come back and get some goals in the third. I hope we are being known as a team that never gives up,” said Colontino. “There may be a playoff game, championship game, an NCAA game when we are down going into the third, and I think if our players look back on these games and some of these experiences they’ll have the confidence to know ‘We are never out, We always have a chance’.”

The Colonials will play conference foe Penn State (7-7-2, 2-4) next weekend at Colonials Arena. Puck drop is at 7:05 p.m. on Skate with the Colonials night on Friday and at 5:05 p.m. for the game on Saturday.