Colonials travel to Staten Island for matchup with Wagner 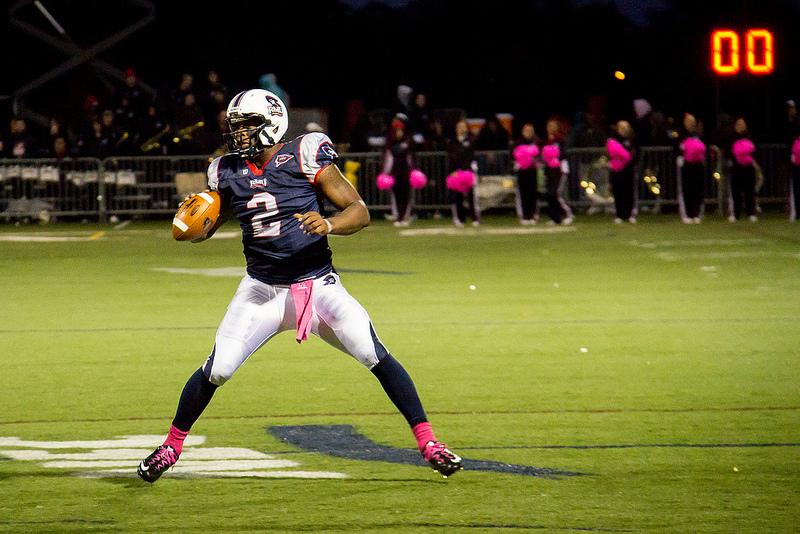 Head coach Joe Walton and the RMU football team head to Staten Island, New York for a date with Wagner College in their first NEC road game of the season on Saturday. Currently at 2-4 on the year (0-1 NEC), the Colonials are looking to find the missing spark for a potential NEC run in 2013.

Their matchup on Saturday won’t be easy, however as the Seahawks were the preseason conference favorite after winning the NEC in 2012. Although, they have underperformed as of late and are holding a 2-5 (1-2 NEC) record on the year.

The Colonials need to especially improve their offense for any chance of a victory on Saturday. On the season, they are ranked 107th out of a possible 122 teams in total offense, and are among the bottom of the NEC. They key to offensive success on Saturday begins with a struggling offensive line.

“We can only control what we can control,” said senior left tackle A.J. Dalton. “The better job we do, the more productive we will be on offense.”

Paul Jones has improved steadily this season, and is coming off a two rushing touchdown performance against Duquesne on Homecoming night. It will be pivotal on Saturday for Jones to establish a rhythm early, and give the RMU defense a lead to work with.

It won’t make it any easier for Jones that one of his primary targets is questionable. Senior wideout Donte Jeter suffered a hand injury against Duquesne, and it looks as if he could be out for a period of time. Sophomore Sean Gavin could step in and pick up the pace alongside Duane Mitchell.

Heading to the defense, junior outside linebacker Mike Stojkovic seems to be out for the year with a foot injury. Senior Luke Mueller stepped in admirably in his replacement, so look for him to have a breakout performance.

Against Duquesne last weekend, the RMU defense held the Dukes to a season-low 269 yards of total offense. They’re ranked second in the conference in points allowed (160), and have benefited from the emergence of redshirt senior linebacker Mike Cook.

“Every game in the NEC is tough,” said Cook.  “We just go through film and try to build a good game plan.”

When asked on what the defense was focusing on leading into Saturday, Cook explained the importance of stopping Wagner senior running back Dominique Williams. In the last two meetings between both schools, Williams has combined for 329 yards on the ground and five touchdowns.

“We have to stop number 25 [Williams], and obviously play well on the pass. It should be a good game,” said Cook.

Kickoff is set for noon at Hameline Field at Wagner College Stadium.