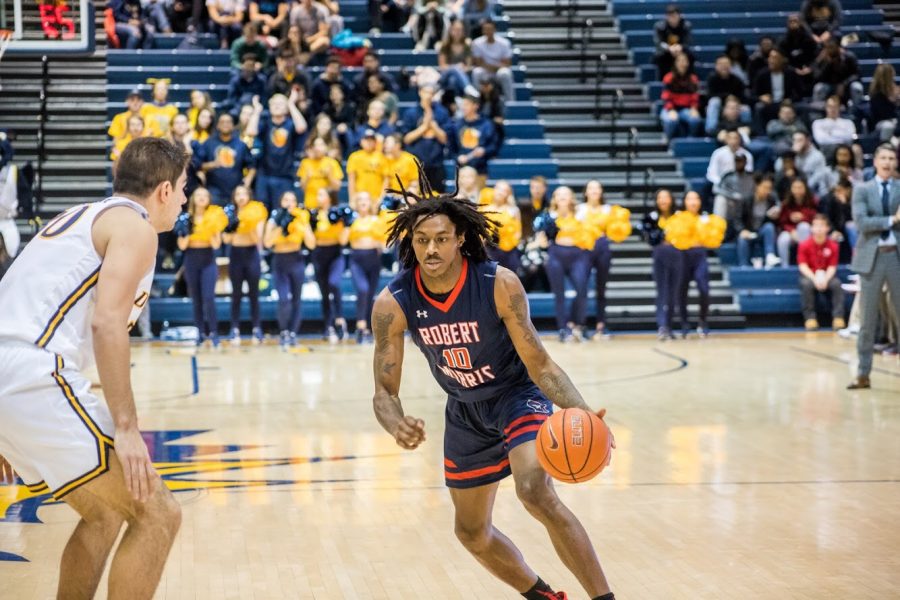 PHILADELPHIA — Koby Thomas drives to the hoop against Drexel on December 1, 2018 (David Auth/RMU Sentry Media). Koby Thomas has only appeared in three games since the 82-69 loss to Drexel. Photo credit: David Auth

MOON TOWNSHIP — Koby Thomas has missed the last four games due to being in concussion protocol, as confirmed by Robert Morris men’s basketball (12-9, 7-1 NEC) head coach Andy Toole after the team’s 57-51 win over Wagner (9-10, 4-4 NEC).

“(Thomas) was in the concussion protocol for the last four games,” said Coach Toole. “He’s working through concussion protocol, so when he gets healthy he’ll get back into practice and start trying to get himself where he can be a productive member of the team on the court.”

Since then, he has missed 10 games for a variety of different reasons. Against newly ranked No. 23 Louisville (15-5, 6-1 ACC) he didn’t play due to coach’s decision as confirmed by Coach Toole.

“We were looking for as much continuity as we can and we obviously haven’t been playing very well and our effort level hasn’t been great and we made a decision to give Chris Coalman an opportunity,” said Coach Toole after the game when asked why Thomas didn’t play. “And I thought (Coalman) did a really nice job with it and the team responded well. We’ll see how things develop moving forward.”

“(Thomas) has not practiced from that illness on Saturday,” Coach Toole said after they defeated Fairleigh Dickinson on Jan. 3, 2019 and referring to the Hood game. “He had only been in practice yesterday and just for a short time, so we’re trying to figure out what’s going on with him. He said he still had some ailments today. I thought his body language, his energy on the bench was much better today which was a good sign, so hopefully, he’s starting to feel a little better. He’s going to see the doctor and hopefully we can kind of get some stuff sorted out.”

Despite not having the 2018 NEC rookie of the year, the team has excelled as they have gone 9-2, which includes a 7-1 record in conference play. The two losses were an 80-73 loss to LIU Brooklyn and a 73-59 loss to No. 23 Louisville, who was unranked at the time.

Robert Morris’s next game will be against Saint Francis University (8-11, 4-4 NEC) on January 31, 2018. It is unclear where the status of Thomas stands for that game as Coach Toole had this to say when asked if Thomas remained in concussion protocol.

“(Thomas) was doing some stuff before the game today to try and get out of it,” said Coach Toole. “But I can’t really comment if he still is or if he is not. He’s trying to work all the steps, our training staff is working with him every day to try and make sure that he’s going to be able to get back onto the court soon.”