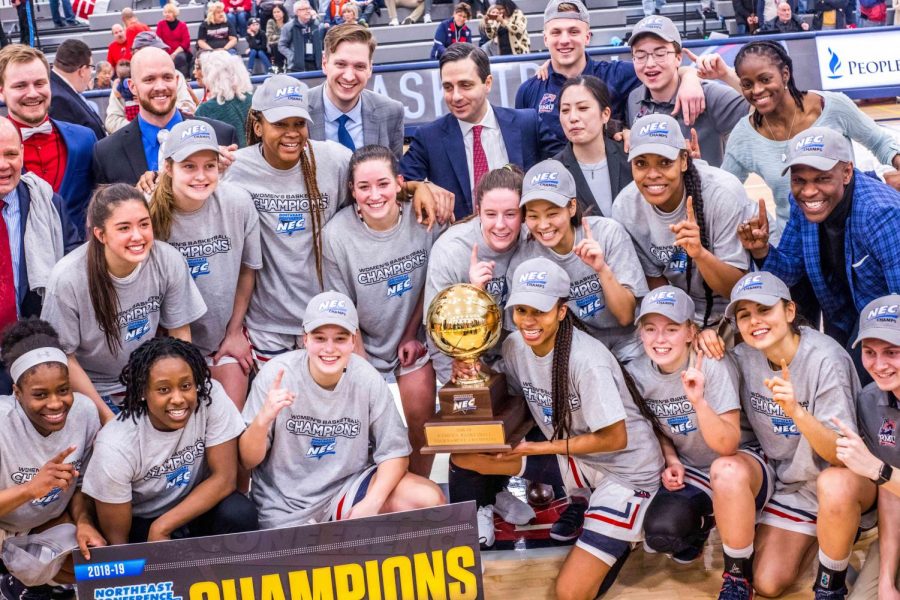 MOON TOWNSHIP — In the last women’s basketball game of the Sewall Center in 2016, Robert Morris defended their home and won the Northeast Conference Championship. Today, in the last women’s basketball game at the North Athletic Complex, history repeated itself. The Robert Morris University Colonials (22-10, 16-2 NEC) took the NEC crown away from the Saint Francis University Red Flash (16-17, 11-7 NEC). The final score was 65-54.

“Hats off to them for winning the championship,” said Saint Francis head coach Susan Robinson Fruchtl.

“I’ve never been prouder,” said RMU head coach Charlie Buscaglia. “For a young team. 70 percent of this team is freshman and sophomores. They certainly didn’t play like it today. When the going got tough we responded.”

Everything was going right for the visiting Saint Francis Red Flash early on in the game. The Red Flash started off a perfect 3-for-3 from the floor. The Colonials’ slow start found themselves in an early 10-6 hole.

The media timeout brought a much needed regrouping for Robert Morris. The Colonials offense came to life and sparked a 14-2 run that lasted the remainder of the first quarter. RMU’s defense held the Red Flash scoreless for the last two minutes and fifty-three seconds of the first. The Colonials took their first lead of the game after a Nadege Pluviose layup with a minute and twenty-three seconds remaining in the quarter.

Then perhaps the most exciting play in basketball happened.

Robert Morris’ Isabella Posset went to the charity stripe after getting fouled on the way to the basket. Posset made the first free throw but missed the second. Irekpitan Ozzy-Momodu pulled down the offensive rebound for the Colonials. Ozzy-Momodu found Posset, who relocated behind the arc, for a three. As the horned sounded to end the first quarter, Posset’s three-point shot fell. The Colonials lead 20-12.

The Colonials’ offense slowed down in the second quarter. Robert Morris’ shooting went cold. RMU hit a tough stretch where they were just 1-for-6 from the field. The rim had a lid on it for Saint Francis as well, the Red Flash had their own stretch in which they were 1-for-6 from the floor.

Foul shots made the difference. SFU was perfect making all five of their free throw attempts. RMU was just 3-for-6 from the free throw line.

The rotation of Nneka Ezeigbo and Ozzy-Momodu were dominating the paint on defense for Robert Morris. The pair of center pulled down 13 of the Colonials’ 18 rebounds in the first half.

The teams traded shots, when they would fall, for the quarter. Saint Francis was able to manage 14 points in the second quarter. Robert Morris poured in 12 points. It would have been nine points for the Colonials, but an Esther Castedo buzzer beater three gave pushed the Colonials’ lead to, 32-26.

The lead was tightened to just one after a quick five-point run for Saint Francis to open up the second half. A Sam Sabino three and a Courtney Zezza mid-range jumper fell, and RMU head coach Charlie Buscaglia called a timeout.

Again the break gave the Colonials all they needed to get ready to increase the lead. That’s is exactly what they did. After a couple of offensive rebounds by Nneka Ezeigbo, she found the bottom of the bucket. On the next possession, Nina Augustin made a three. Just like that, all five points back and a quick time out by Saint Francis.

The Colonials opened up an 11 point lead in the third quarter. RMU went on yet another five-point run. The Colonials’ defense put the Red Flash’s offense in fits, most noticeably SFU’s Jess Kovatch. The all-time leading scorer in NEC history was arguing with referees in the later stretches of the third quarter.

RMU continued to lead, 49-38, as both teams got ready for the fourth quarter.

The Red Flash wasn’t ready to concede their NEC crown. Saint Francis, lead by Jess Kovatch, sparked a nine-point run early in the fourth quarter. The once docile Red Flash fans that made the short trip were electrified. With four minutes remaining, the Colonials double-digit lead was cut down to just two.

“A lot of teams can come back into the huddle and hang their heads,” said Buscaglia. “Think about how we blew a lead. How we made all these mistakes. How I’m upset with myself. That wasn’t the huddle. (Everybody) was there to come out and respond, think of their team first, and to not let it bring us down. We work too hard.”

A Nina Augustin triple stopped the bleeding a little bit. Then as she did on Thursday, Esther Castedo played the role as unlikely hero.

As time dwindled down, Isabella Posset found Castedo in the corner for a three. The freshman knocked down the three, that made the score 59-51.

Robert Morris was able to defeat the Red Flash for the third time this season. Buscaglia credited this win to his team’s preparation.

A couple of Colonials went home with more hardware than just the NEC Championship trophy. Nneka Ezeigbo, 11 points, and 12 rebounds, was named the NEC Tournament’s Most Valuable Player. Nina Augustin, 14 points and two rebounds. was named to the NEC All-Tournament team.

The Colonials learn who their opponent is for the NCAA tournament on Monday night.