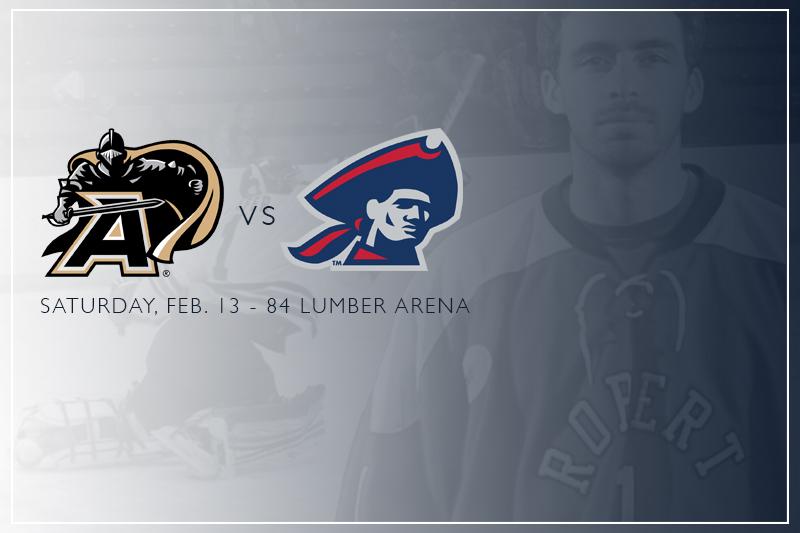 After a discussion about effort with Head Coach Derek Schooley last night, the Robert Morris men’s hockey team came out firing, and took a 3-0 victory over Army West Point on Saturday. The score may be the focal point, but with a mostly scoreless game, the focus was mostly on the playoff atmosphere of physical hockey.

“We’re going to be playing a team like that in playoffs first round,” said senior Greg Gibson. “We have Air Force next weekend, they’re going to bring the same intensity, so we just have to match it.”

The score was set in the third period; with about 14 minutes to go in the game, Gibson scored with assists by Chase Golightly and Matt Cope. Just over a minute later, Timmy Moore scored with an assist by Daniel Leavens. Gibson scored again in the final two minutes on an empty net to set the final score.

“The whole game we were waiting for that to happen, waiting for the floodgates to break,” said senior Zac Lynch. “We were getting a lot of chances and when they finally started going in we just took the momentum there at the end.”

More notable for the Colonials was the stellar play of senior goaltender Terry Shafer. Having to take over the full-time starting duties after an injury to Dalton Izyk, Shafer has not shied away. With the 40-save shutout this evening, he continues to stretch out his record for shutouts in a career with eight.

His timely saves, which sometimes seemed improbable, managed to keep Robert Morris in the game.

However, the early part of the game featured fireworks and excitement all the same. Through the first period, the two teams had tied on shots on goal, shots attempted, and shots in the home-plate area. The penalties were almost even as well, with most of them being off-setting by extracurricular activities.

A few penalties were of note, especially the first for Robert Morris, which was one Schooley mentioned in the post-game interview. With the Colonials heading for a powerplay, Rob Mann got into a tussle with an Army player, and was called for roughing to negate the powerplay. The four-on-four yielded no opportunities.

“I brought it up in between periods, we want to play hard between the whistles, but we don’t want any of what I call dead-ball fouls to use a term from football or basketball,” said Schooley. “We didn’t want to have any penalties after the whistle. We were getting a powerplay, and we took a penalty, which isn’t smart. We just have to be smart with how we played, and I think we were for the most part because they took a lot of penalties after the whistle then, which put us on the powerplay. I think our guys were better after the first period. But we just have to keep our heads, be smart.”

Other notable penalties included a rarely listed hitting after the whistle penalty assessed to both teams in the middle of the second period. By the end of the game, Army would have served eight penalties while Robert Morris served nine — the last of which was in the final minute to Evan Moore, breaking the last tie of the game.

Neither team managed to score on the powerplay.

Following the game was “Skate with the Colonials” night, and Terry Shafer had some kind words for the fans.

“I love the kids. The fans are great, they’re here and cheering us on. They’re here all the time,” said Shafer. “It’s half an hour of our time, it’s no big deal. We’re happy to go out there and be with the kids. It’s Saturday night, but we have to give it up to our fans. Without them, we wouldn’t have the atmosphere we play in.”

The Colonials are on the road next week to take on Air Force before splitting the following weekend with a home-and-home series against Canisius.