Croatian Colonial looks to help RMU volleyball as a sophomore 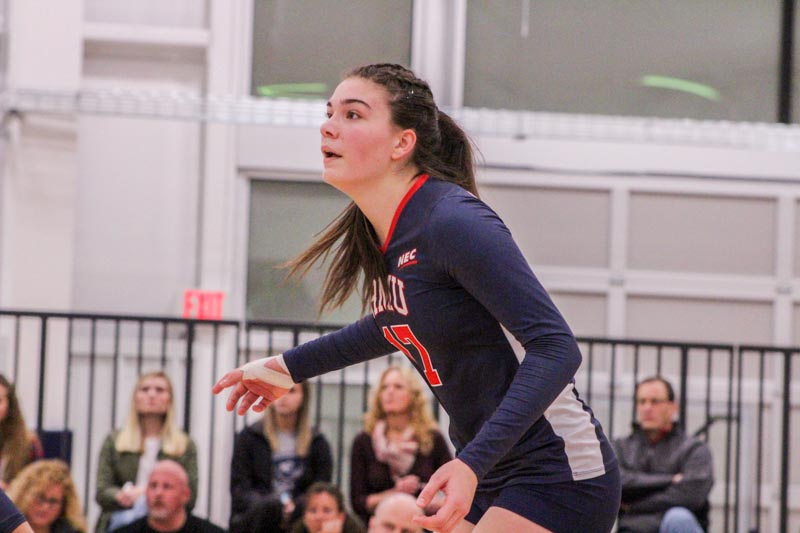 Robert Morris University volleyball outside hitter Mirna Sarjanovic has some interesting origins, to say the least. The 6’0” sophomore comes from the city of Zagreb in the eastern European country of Croatia and grew up playing various amounts of sports such as swimming and tennis. But due to her mother also being a college volleyball athlete, she took influence from her and started playing volleyball in fifth grade. The sport has stuck with her ever since.

A Croatian superstar, Sarjanovic had many achievements before she had come to RMU. During her senior year of high school, she was named the best player on Team Croatia during the MEVZA Tournament where her team placed fourth overall. She is also a three-time junior champion with her club team HAOK Mladost and also competed in the qualification tournament in the World Volleyball Championship in Turkey.

Sarjanovic made the choice to come study abroad and play volleyball due to various reasons. Sarjanovic states that in Europe and especially in Croatia, they don’t provide the opportunity for students to be student-athletes in college. Not wanting to give up volleyball, Sarjanovic decided to continue her volleyball career by studying abroad at RMU.

“I visited a few colleges and I liked RMU the best because it’s small, intimate and it feels the most like home because I come from a small city compared to American ones.”

Despite it being the northwestern capital of Croatia, her hometown of Zagreb has a population of only 790,017, which is roughly the same population of American cities such as Charlotte, North Carolina, and Columbus, Ohio.

Being from a completely different country, she states that her two biggest adjustments are speaking English 24/7, and being so far away from her home. But her English has progressed greatly over time as communicating is a key part of volleyball, while she also says that her family back home is only “one Skype call away.”

Sarjanovic acknowledged how the community of Robert Morris — whether it be teammates, faculty, students, and even some international professors- that she has met, all have made her feel very comfortable with her adjustment.

“When you call someone, even if it’s in the middle of the night, they are ready to help you … I would say that Robert Morris loves international students as they are very open to them.”

When asked if she had any advice for other students who are looking to make the journey to a different country as she did herself, she stated the following.

“Well I know a lot of people who want to do it and the only advice I have to them is to not be scared, I met incredible people here who were all willing to help me adjust […] don’t be scared to take new chances because you’re going to be glad that you did it.”

As for volleyball itself, Sarjanovic is ready for this season to begin as she embraces what she calls more of a leadership role in her sophomore season. She claims last year was mostly about her adjusting from European volleyball to American volleyball and that this year she is ready to help the freshman more as a leader.

“I think this year will be really good because last year we had eight freshman which was a lot, and even though we are still a very young team, we got to know each other better […] I think we all connected really well and because of that, I think we will do really good things this year.”

Sarjanovic confidently stated that her personal goals for this season were to simply help the team win. She says that the teams season goals come one step at a time with things such as winning the preseason tournaments before they focus on things such as a shot of going to the NCAA championship at the end of the season.

Robert Morris volleyball team continues their 38th season at the Hokie Invitational at Virginia Tech this weekend where they will try and start their journey to their ultimate goal of winning the Northeast Conference Tournament and going to the aforementioned NCAA championship.

Their schedule for the tourney is below: