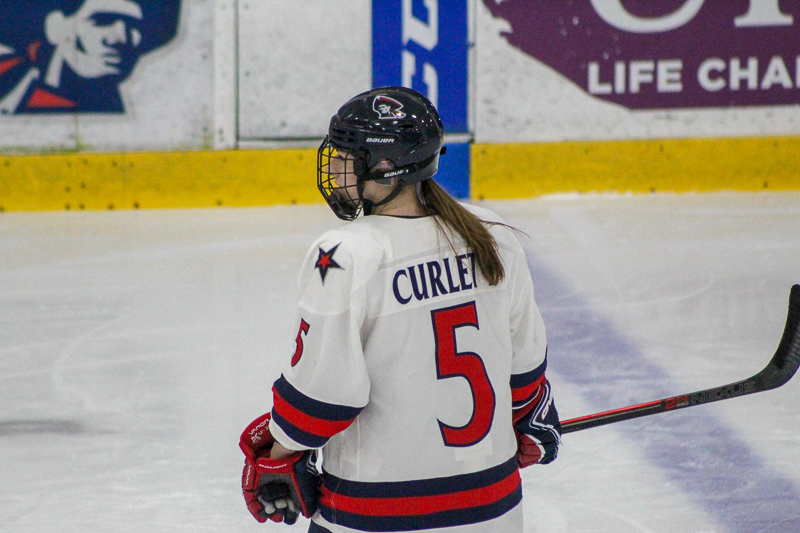 PITTSBURGH –Another game-winning goal from Emily Curlett paved the way for a solid 2-0 Robert Morris University women’s hockey (11-11-4, 9-2-1 CHA) win over RIT (9-12-4, 5-6-0 CHA). Both RMU goals were scored by sophomore defender Curlett (one being an empty netter). Lauren Bailey added a shutout making fourteen saves on as many shots, and RMU swept RIT on mental health awareness weekend.

Just like last night, this was another tight-checking game between two very good teams. The Colonials were able to control the game offensively for the most part with a couple solid two on one chances from both Sarah Quaranta and Lexi Templeman.

On top of this, the team had a good handful of power plays with many chances as they cycled in the offensive zone, but again, they were shut down by RIT goalie Terra Lanteigne who stole the show all weekend for RIT. This went on for the majority of the first two periods of the game until late in the second when RMU finally scored a power-play goal.

The stat that perhaps defined the game was that the Colonials fired seventy-eight shots, with only thirty-seven making it on net, in what was essentially a 1-0 game. Not only were the Tigers getting great goaltending, but they were also blocking shots and playing great defensively. RMU head coach Paul Colontino had the following to say about RIT’s style of play.

“They did a great job all weekend getting in shooting lanes and making sure they had sticks on pucks. I think the one thing this tells us is that over these next couple of weeks we’ve got to start implementing a few things to find lanes and to find seams because as you move towards playoffs you will see more of that with every team you play.”

As stated before the Colonials had many power-play chances, and late in the second period they finally beat Lanteigne on the power play with a one-timer bullet from Emily Curlett. Curlett finished the game with eleven shots on net and was arguably the best player on the ice for the Colonials all weekend. She has been a major player for RMU since the injury to Kirsten Welsh and has now eight goals as a defender. Paul Colontino even went as far as saying that she is “like a safety that plays offense.” When asked about how great her play has been lately Curlett said the following.

“I think it’s pretty awesome, of course we want Welshy back and when she does come back it’s going to be pretty hard to stop us on the blue line, but it’s a pretty good feeling when know you have to step up and you actually do.”

Curlett added another goal, this one with the net empty late in the game which would seal the sweep for RMU 2-0. Statistically, the Colonials were better in every category 37-17 in shots on goal, 34-24 in the faceoff circle and 1-0 in power play goals.

Both games the Colonials played this weekend had them playing a good solid sixty minutes and it really shows what this team can do when they play the right way. Currently, RMU is still first in the CHA. The Colonials will have more CHA action next weekend at Penn State (10-10-5, 4-7-1 CHA). Both games are away and will be at 1:00 p.m. this upcoming Friday and Saturday.