Derek Schooley: ‘You can’t take a game to get started’ as men’s hockey readies for semi-final game against AIC 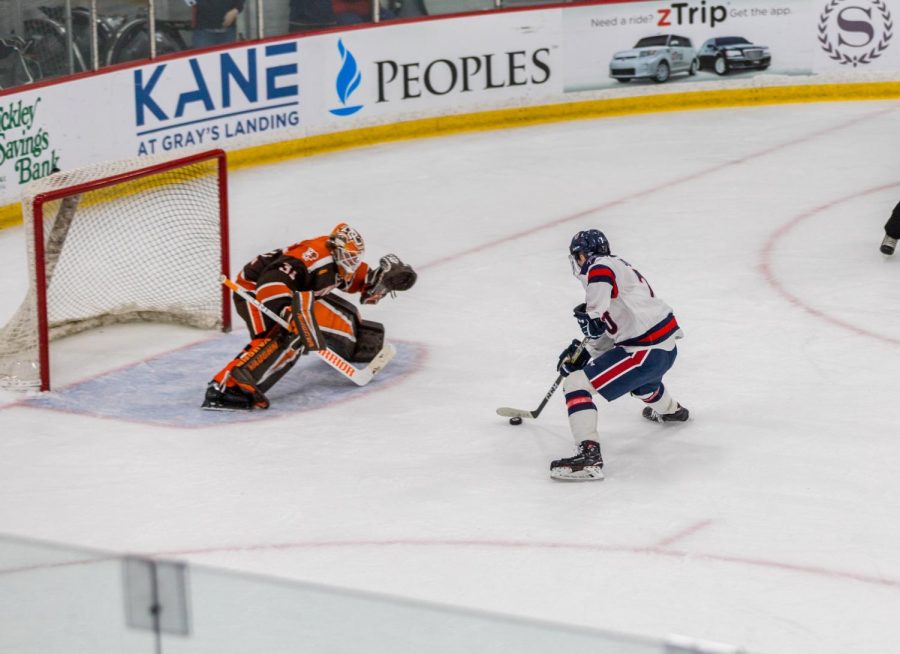 MOON TOWNSHIP — After a thrilling best-of-three game series against the Bentley Falcons, the Robert Morris hockey team was back on the ice at Colonials Arena for what could be their last time of the season.

RMU Sentry Media was able to travel to Neville Island to cover the practice, and get some thoughts from head coach Derek Schooley, Jacob Coleman and overtime hero Justin Addamo.

“You can’t take a game to get started,” said Coach Schooley about the single-elimination nature of the semi-final games. “You have to be ready to go right off the bat, and I thought we were against Holy Cross. We’re no strangers to elimination games, having to play back-to-back ones against Bentley, so we have to be determined and focused.”

With what may be his biggest goal as a Colonial in his short career here, the series-clinching overtime goal against Bentley, French freshman Justin Addamo stated, “We had the face off in the neutral zone, and Luke (Lynch) lost the draw, so I had to push for the forecheck, and I just pushed the puck away. I ended up in front of the goalie, I shot it, and it went in.”

One person who is experienced in playoff games is junior forward Jacob Coleman, who has played in 13 career playoff games, tallying one assist (on Aidan Spellacy’s game tying goal in game three against Bentley). “I think a lot of these guys have experience in the playoffs with their junior teams,” said Coleman of the freshmen in the playoffs. “A lot of that is experience from that, and kind of feeding off what these older guys say. I think they’ve taken everything, and just ran with it.”

One of the strongest lines for the Colonials has been the line of Nick Prkusic, Aidan Spellacy and Jacob Coleman. Coleman stated, “It’s awesome. I know those guys are going to go out and battle every shift. They make easy plays, they make smart plays. I think we all feed off each other.”

Come playoff time, play tends to get more physical than in the regular season, and the 6’ 6” Addamo is no stranger to that, “I just got to use my body, finish my checks. I cannot allow myself to curl and not hit a guy while I’m forechecking. You just have to be a bit harder in the playoffs and make sure to remember you’re coming at them.”

Looking forward to the semi-final match against American International, Coach Schooley said, “You have to score more than two goals. You know, we lost 3-2, won 3-2 and won 2-1. It’s tight checking, you have to make sure you capitalize on your chances, we’re good down low, and make sure we take care of our own end. It helps when your goaltender plays as well as he (Francis Marotte) does.”

The game against AIC will be Friday, March 22 at the HarborCenter in Buffalo, New York. Puck drop is at 4:35 p.m.