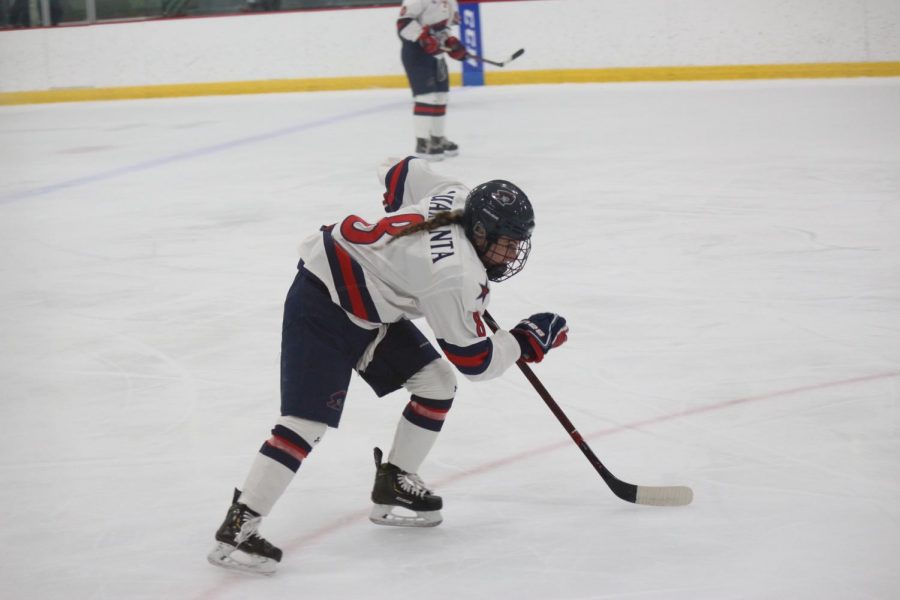 BUFFALO, N.Y. — The Robert Morris women’s hockey team defeated Penn State on Thursday to move on to the CHA championship game. They will take on the Syracuse Orange at 4:30 p.m. on Friday.

The opening period started and finished as a fierce stalemate with neither side wanting to give up a crucial first goal to begin play. The Colonials got arguably their best chance of the period early when Emily Curlett let a blast go from the point with 17:48 on the clock, which bounced in front of PSU netminder Jenna Brenneman but couldn’t be put in on the rebound that laid near the blue paint. Just over a minute later, with 16:22 remaining, the Colonials were sent to the sin bin on a penalty to Emilie Harley for hooking.

RMU killed off the penalty, and in the ensuing aftermath had a couple of good opportunities but couldn’t keep it in the offensive zone as the Nittany Lions’ staunch defense held strong. Both teams traded momentum for the remainder of the period, and while RMU goalie Arielle DeSmet didn’t see a lot of action in the opening frame, the shots she had to stop were challenging, as she had to stay strong on two hard Penn State wrist shots that went into her glove, and then had to corral a loose puck that dropped out of it and into the crease with just 8:10 left in the first. Despite all the action, RMU and PSU went to the locker rooms knotted in a scoreless tie after 20 minutes of play.

In the second, Robert Morris looked to set the tone for the rest of the way and did so in an immediate, impactful opportunity. On their first rush of the period, Amber Rennie sped into the Penn State zone with Jaycee Gebhard, who fed the puck over off a two-on-one which she slid past Brenneman to give RMU the 1-0 lead just 37 seconds in.

However, with 15:52 remaining, Kirsten Welsh was sent off for a hooking call and Penn State took advantage. Despite the Colonials’ best efforts, managing to get the penalty to under a minute left, PSU jammed the crease and captain Kelsey Crow swept the puck towards DeSmet and the rebound found its way to Brooke Madsen who put it past the RMU goalie to tie the game at one apiece.

From there, even though the Colonials had another power play opportunity when Abby Welch was sent to the box for a body check at 12:29, they were unable to beat Brenneman despite a flurry of chances, including a spinning backhand by Jaycee Gebhard from her knees that couldn’t find the twine. PSU and the Colonials went to the locker rooms still tied, this time at one, after 40 minutes, and it seemed that this game would hinge on a single shift.

Heading into the final period of play, RMU dug in and proved why they wanted another shot at winning it all. Just a minute and 23 seconds in, the Colonials won a faceoff in the Penn State end, and the puck found its way back to Maggie LaGue who wired a slapper on net, where it found the stick of Sarah Quaranta who emphatically pounded the puck past Brenneman to put the Colonials back ahead, 2-1.

From this point on, the Colonials would be engaged in a fight to the very end as the Nittany Lions poured it on offensively, desperate to keep their championship dreams alive. RMU took another costly penalty at 15:19 when Kirsten Welsh upended a PSU player at center ice and went to the box for roughing. The Colonials responded to that with a phenomenal effort on another staunch penalty kill including a huge block off Maggie LaGue’s leg, taking one for her team.

When Welsh came out of the box, RMU had their most dominant amount of ice time in the PSU zone yet, keeping the puck in at every turn and wearing out the Nittany Lions players to near exhaustion. Still, with time ticking off and with under two minutes left, Penn State made one last-gasp effort in order to try and get the puck over the goal line. They had several chances in tight, but the Colonials stood strong and cleared every opportunity down the ice, killing off the clock and securing their spot in the title game as DeSmet turned out another stellar performance in net.

Head coach Paul Colontino stated that, with regards to the tightness of the game and the score, “In many cases, it comes down to one play…getting to those loose pucks” and noted about the, “Two-on-one where Jay [Gebhard] makes a great pass to Rennie.”

However, Colontino continued, “You’re not going to get that many chances in the playoffs, so number one you have to want one, but also number two you have to create one and I thought we did that well with Welsh’s shot from the point and LaGue driving in…those were just three really huge plays.”

Sarah Quaranta, who scored the game winner, noted her team’s fight going into the second period, “We didn’t back down when they tied it so I think we had to just stay focused, stick to our gameplan, keep things simple, and we came out with a win.”

Quaranta also commented on the stellar play of rookie goalie Arielle DeSmet, continuing to say, “it all starts on the back ends, she came in net, and made some key saves, and kept her momentum strong. From there we just kind of built up the rest of the way.”

With Robert Morris now having punched their ticket to the CHA title game, they will take on Syracuse as they defeated Mercyhurst 4-3 on Thursday.