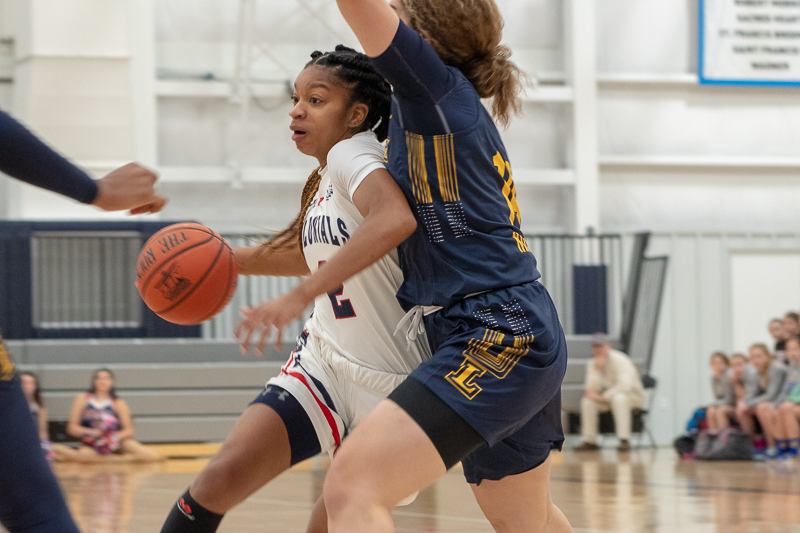 MOON TOWNSHIP — In their home opener on Sunday, the Robert Morris women’s basketball team (1-1) took the wheel and simply never looked back in a 67-39 victory over the La Salle Explorers (0-2) in just their second all-time win against the Explorers.

The Colonials took off right from the very beginning with a 16-4 run in the first 6:10 of the game. In terms of overall efficiency, Robert Morris was firing on all cylinders both offensively and defensively in the team’s most complete quarter in this young season.

In their first game of the season, the Colonials gave up 69 points at the hands of the Youngstown State Penguins, the most points the team had allowed since their first game last season when they played Michigan State. In Sunday’s match-up, the team got back to their defensive roots and it paid off dividends.

After allowing just 23 points in the first half of play and carrying a 35-23 lead going into the locker room, the RMU defensive front only got stronger as the game went on. The third quarter may have been their absolute best of the game. The Explorers were simply unable to create anything as they were held to just four points in the entire quarter while not recording a single field goal.

The Explorers took 14 shots in the third quarter, missing every single one of them.

And with such defensive dominance, the Colonials took complete control as they carried a 52-27 lead going into the game’s final quarter.

“(Defense) it’s our backbone,” said head coach Charlie Buscaglia. “You have a backbone that means everything for your body and our body of work is coming to work every day and defending.”

“We really stick to man-to-man defense and just buckling down to keeping the ball in front of you,” said senior guard Nia Adams. “And we know from this team that they like to rebound the ball very aggressively. So just a lot of one-and-done’s, high contests and really getting up in their face and playing defense.”

This was an excellent game both offensively and defensively. The most significant part of that was the production not only came from RMU’s tried and true players, but it was also their freshman who certainly gave Colonials fans a look into the potential of this young team.

With Honoka Ikematsu getting into foul trouble early, It was freshmen Isabella Posset and Esther Castedo who picked up the slack for the team’s best three-point shooter. Posset and Castedo finished the day with a team-high 12 points. Castedo, the product from Spain, flashed her skills from beyond the arc, going 4-for-7 from three-point range.

Posset continued to show why she has the potential to be Moon Township’s newest star finishing the day with 12 points two rebounds three assists and two steals, the most all-around effort on the team.

“Statistically, on the board, you can see that’s a good game. But it was more her being a leader. said coach Buscaglia. “When you’re a freshman at the point guard position, that’s not an easy transition. Even if you played the point in high school, you’re held to a lot more accountability here at Division I basketball and I love to see her being loud and vocal and playing with intelligence.”

The Colonials will take tomorrow off before hosting the University of Rhode Island Tuesday at 7 p.m. at the Student Recreation and Fitness Center at Robert Morris University in search of their second straight win.