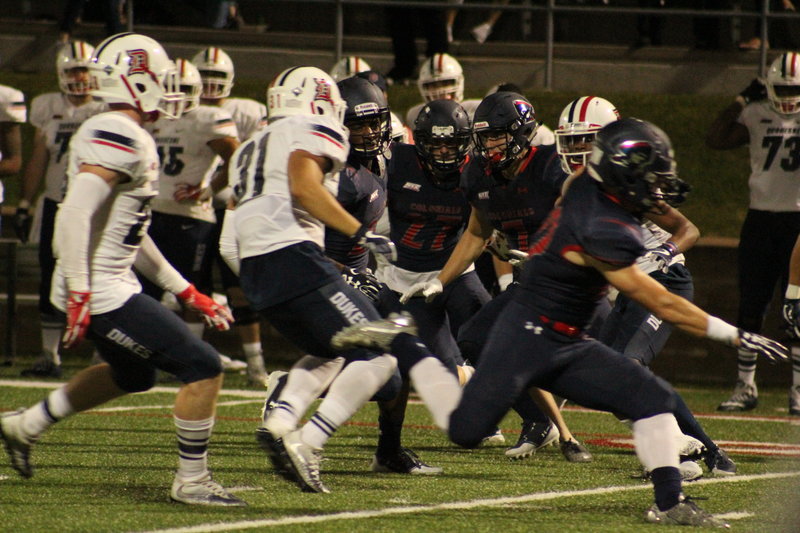 The senior cornerback for RMU exploded as he perfectly read the throw from Duquesne quarterback Tommy Stuart and cruised into the end zone to start the scoring for RMU with 7:47 left in the first quarter.

But it was Duquesne who responded right back as Stuart was able to thread the needle right in between two defenders to receiver Kellon Taylor who brought in his third touchdown grab of the season to quickly even the score at 7-7.

From there, the Dukes never looked back

Penalties became the Colonials’ worst enemy as the team racked up 80 yards worth of penalties in the first quarter alone including a whopping 30 yards during a single play due to two unsportsmanlike conduct calls on Gerald Ferguson and Derian Smith.

From there, Duquesne workhorse Nehari Crawford, who already had eight touchdowns going into this matchup, brought in his ninth grab of the season. Allowing the Dukes to take their first lead of the game.

After a missed 46-yard field goal from struggling freshman kicker Nick Bisceglia, Duquesne took advantage of the good field position and drove right down to put the Dukes up 20-7 with yet another Nehari Crawford touchdown grab.

Crawford would end the day with 96 yards and 2 touchdowns.

But the Dukes weren’t nearly done with their onslaught of scoring. The Dukes would put up two more scores before the half giving the Colonials a 27-point deficit going into the half.

The team managed to accumulate a total of 116 yards in penalties in the first half alone.

“I don’t know what happened,” said coach John Banaszak “I told them that you can’t retaliate like that. We’re gonna have to look at the tape and see what happened,”

The Dukes completely owned both the second and third quarters, racking up a lead as big as 44-7.

After a 7-0 lead, the Colonials allowed a total of 44 unanswered points, not even the worst stat line of the season for the Colonials who had already suffered 30-plus point losses this season.

The RMU offense was finally able to get on the board for the first time off a 2-yard run from Harrison Dreher, whose performance with 78 rushing yards and 45 receiving may have been the only bright spot for this Colonials offense.

“We’re improving (Offensively) every week,” said Banaszak “We got Hicks back this week that really helped but we have to do better next week with Sacred Heart,”

But it was far too late at that point, as the Duke had already placed their backups in to finish this statement win for a team expected to compete for the NEC title.

“We have Sacred Heart at home next week and we have to take advantage of that,” said Banaszak.

The Colonials drop to 2-4 on the season and 0-1 to start off conference play. The team looking to shock the NEC proving that they still had work to do.