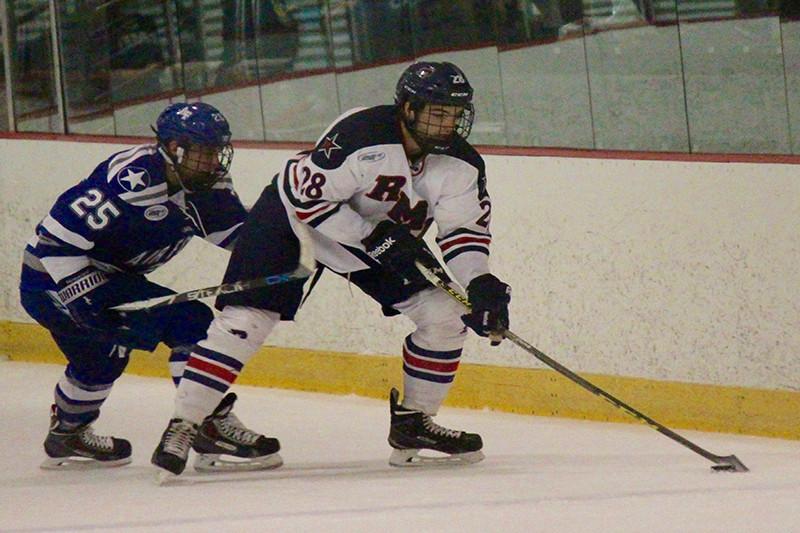 There really is no good way to say it. American International College (1-8-0) entered Moon Township winless on Friday prepared to take on the 20th-ranked Robert Morris Colonials (3-2-2). The Colonials, coming off a victory over then 10th-ranked Michigan last weekend, failed to show themselves as a nationally ranked team. AIC stole a comeback victory 3-2 on Friday night, their first victory over a ranked team in school history.

This isn’t to say the Colonials didn’t battle hard. They did. It’s to say the Yellow Jackets seemed to battle harder. It didn’t start off this way. In fact, there was a distinct turning point. So distinct, in fact, head coach Derek Schooley pointed it out himself after the game.

“We’re an older, veteran hockey team, and we have to be smarter,” said Schooley, getting animated. “That was just, that was not a smart penalty. He got engaged with them. He felt that he was either squirted with a water bottle or spit on. You know, so you go tell the ref. You don’t turn and punch the bench because nothing good can come of it. No one saw the original. And it’s not a smart penalty. That was the momentum changer of the game.”

What happened, you ask? If you don’t, the answer is still represented. With the clock at 12:42 remaining in the second period, the face-off was next to the AIC bench. Daniel Leavens, a junior, was against the bench when the players on AIC started to reach out and say something. Leavens, the apparent hothead, turned and threw a punch at a few players and the back-up goalie.

“We know teams are going to try to get under our skin, that’s how they take advantage of us,” said captain Tyson Wilson. “Obviously, we can’t let them. We have to be the bigger players out there, and I think tonight it showed how much it can affect our team.”

The penalty resulted in AIC’s first goal of the game, exactly four seconds after. With a tie up in the face-off, the puck bounced out to Johno May for a shot at the very top of the home-plate area. He rifled it by Terry Shafer to break his shutout.

Prior to that, Greg Gibson, recently named the Hockey Commissioners’ Association National Player of the Month for October, had shown extraordinary skill. Less than five minutes into the first, Zac Lynch fed a pass from the corner for a one-timer by Gibson which located the glove side corner of the net.

Then, after a penalty in the early moments of the second, Gibson fired another shot from the same location. It was stopped, but the rebound went to Matt Cope to pot it five-hole. The game was 2-0 heading into the pivotal moment.

While everything appeared to relax, and the opportunities became scarce, lest they be picked off by the anger building underneath. Only one opportunity in the second was of mention, a 4-on-2, which yielded no result but a great save by AIC goaltender Alex Murray, who was remarkable to say the least, stopping 44-of-46 shots.

The third period opened 2-1 and with RMU a man down. As the time ticked away on the powerplay, AIC won a face-off to the left of Shafer and through a series of unfortunate events, traded possession multiple times before it finally settled on the stick of May, the previous goal scorer. He wound up from the left face-off circle, and through traffic, sent the puck soaring into the net for a tying goal which suffocated the arena.

“One of our greatest strengths is that we play on emotion and we play with heart and we play with energy,” said Schooley. “But one of our biggest weaknesses is we get involved in extracurricular stuff and we let our emotions hurt us. We were in the penalty box too much, and we couldn’t win face-offs. They got the quick powerplay goal when we were dominating the game, might have been their first shot of the second period. This is on us. This is on us as a staff, this is on us as the players, and you know what? Really disappointed in the outcome and the result. I thought that was a game we were in control and we let our emotions hurt us.”

Everything returned to normal for about five more minutes, until the referee became the focal point of the game. A note for those considering the life of zebra shirts, the last thing you want to do is become the focal point of a game. Having missed many calls throughout the evening, they seemed well-equipped to mismanage the end as well.

Brady Ferguson hopped off the bench, cut across the center line, and received a pass. Spotting a lone defender in his way, he turned on the jets and raced by him with a juke. Going from forehand to backhand so smoothly it would alert you to witchcraft, he beat the goaltender and appeared to pot the tiebreaker. Instead, the goal was waved off and reviewed. After review, they determined it was no goal. For what reason, we do not know.

Another goal was waved off shortly after, this one for the Yellow Jackets after one of their players batted the puck into the net with his hand. It was quite a stretch.

With five minutes remaining in the game, a face-off to the side Shafer took an awkward bounce. Within moments, Shafer was on the ice, the puck appeared tipped past by Travis Douglas in front. However it made it in, the game was now at 3-2 in favor of AIC.

RMU made a final rush with under two minutes remaining. Lynch at one point held the puck between the face-off dots. He passed off to Cope on the right side, who fired a shot. It was stopped, but still in play. A scrum ensued, covering the net and eventually knocking it off as Murray lay on the puck.

“We got the puck low a lot, we had a lot of chances down low,” said Wilson. “They just weren’t getting through. Their goalie played well, obviously. Controlled rebounds when he needed to, played well near the end of the game.”

As the scrum was broken up by the referees, a player for AIC grabbed Lynch by the facemask and yanked him away.

“Penalty on American International, two minutes for roughing!” yelled a boy in the crowd. He had obviously finished more courses than the referees in this contest.

Robert Morris will return to 84 Lumber Arena on Saturday to take on AIC, again.