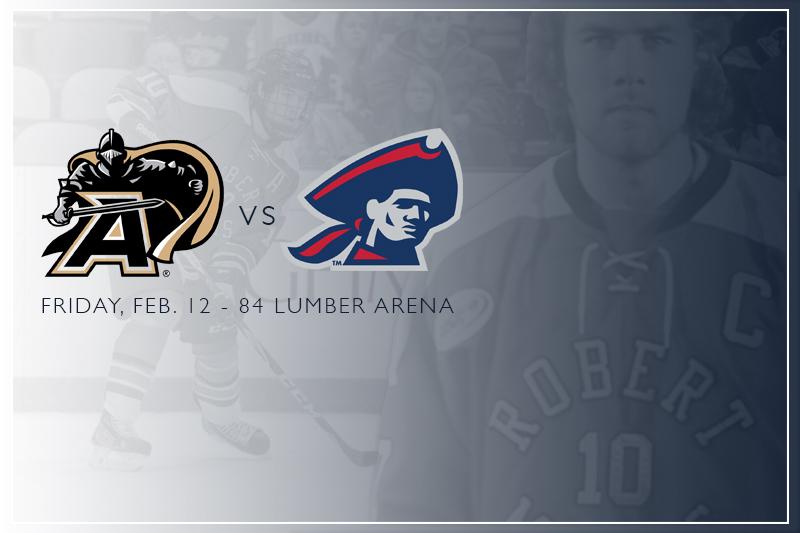 The Robert Morris men’s hockey team fell to Army West Point on Friday evening by a score of 3-1, in a game that was tightly contested and managed to test the patience of the players. While the fans jeered the referees, it appears the real story of the game, according to Head Coach Derek Schooley, was the complaining and emotion that came from the Colonials.

Every game tends to end in a similar fashion, with players crowding the nets and trying to rattle a goaltender who’s likely starting to tire out from the beating of during the game. It leads to scrums, a face-wash here and a cross-check there. Most of the time, these lead to nothing but a referee pulling the two apart while they argue. For this evening, it instead drew the ire of the crowd.

Robert Morris players were found to be speaking with the referees post-whistle a lot, with animated gestures to try and explain what they felt was a slight against them. The referees seemed to respond more so with shrugs than anything. Some fans were livid, screaming about calling a “fair game” and pointing out any hit as a “dirty, late hit.”

The Colonials themselves seemed to be a bit wary from it as the game wore on, turning to the referees after every whistle and scrum. They were met with a cold shoulder, and it didn’t appear to be because of the ice rink.

“You just have to play hockey, there’s no reason to really jaw too much,” said Matt Cope. “You’re going to get frustrated, it’s going to happen. But what you have to do is swallow it, use it as motivation in the game. All we have to do is focus on the game, can’t worry about what calls we’re getting or what calls we’re not getting. It’s just hockey, and the best team’s going to win.”

As for the game itself, it was a constant struggle for any ground to be gained. Army held the blue line steady and were physical down low, making it hard for Robert Morris to get anywhere. Meanwhile, Army garnered chances off the rush, but Terry Shafer stood tall in net for the Colonials. It was a barnburner that was scoreless after one.

The majority of chances for Robert Morris seemed to come on the outside, with players coming in with the puck held out from their body toward the boards and whipping it toward the net with nifty moves that found no luck.

Blake Box sent a harsh flick past Shafer’s glove to open the scoring, the lone goal in the second.

The other goals were scored off crashing the net, one on each side, both on the powerplay. Army’s second goal was scored by Brendan McGuire, while Robert Morris had a goal from Brandon Denham off a set play down low.

The final goal was scored on an empty net by Army’s Nick DeCenzo. Robert Morris returns on Saturday to face Army again at 84 Lumber Arena. Puck drop is scheduled for 7 p.m.