Everything you need to know: RMU falls to St. Lawrence in game one 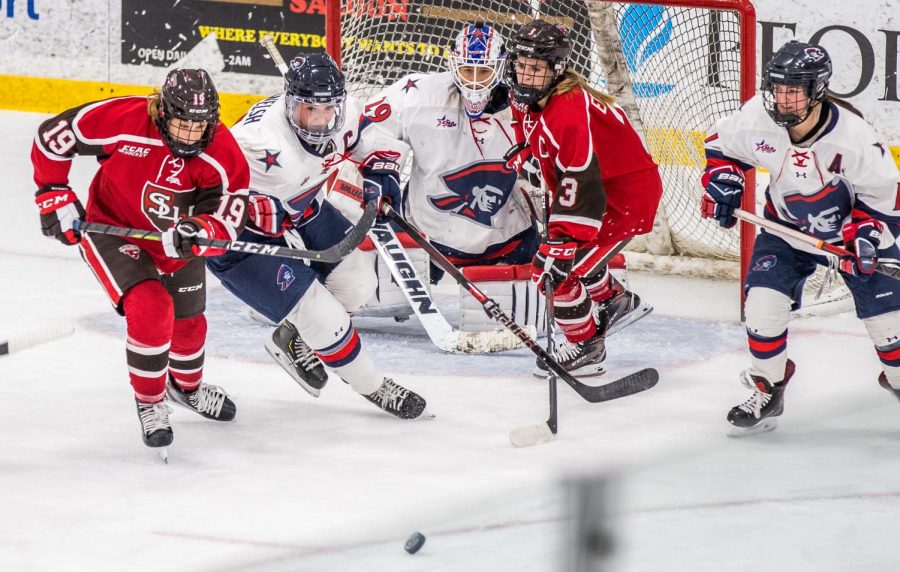 The Robert Morris Colonials (0-1) took on the St. Lawrence Saints (1-0) in a Friday night non-conference matchup at the Colonials Arena. The Colonials put up a tough fight but just couldn’t find the back of the net as the Saints emerged 2-0 winners in game one of the weekend series, which concludes tomorrow at 3:05 p.m. Here is everything that you need to know about the Colonials’ first game of the season.
Why it happened:
While the game got off to a fast and physical start, the action soon grew to a stalemate with neither sides budging multiple times throughout the contest. Ultimately, St. Lawrence capitalized on a couple of breaks presented to them through the bounce of a puck in some cases.
What it means:
With the loss, the Colonials drop to 0-1 on the season. The same two teams will face off in game two of this weekend series tomorrow at 3:05 p.m. at Colonials Arena.

Who was there:
The St. Lawrence defense was staunch on almost every single opportunity RMU threw towards the net. They got their bodies in the way of both the shooting and passing lanes and they also made it difficult almost the whole game for the Colonials to get any pucks into the net.

Who starred:
Saints goaltender Grace Harrison was absolutely dominant in net, stopping all 25 Robert Morris shots she faced. In addition, she stopped several promising scoring opportunities for the Colonials including a one-timer that came from across the zone late in the third period.

Who stumbled:
The Colonials offense struggled through a couple of tough times on the ice. In addition to having numerous passing and puck control issues late in the final period of play, the Colonials couldn’t convert on their two power play chances, and they failed to generate any major scoring chances.