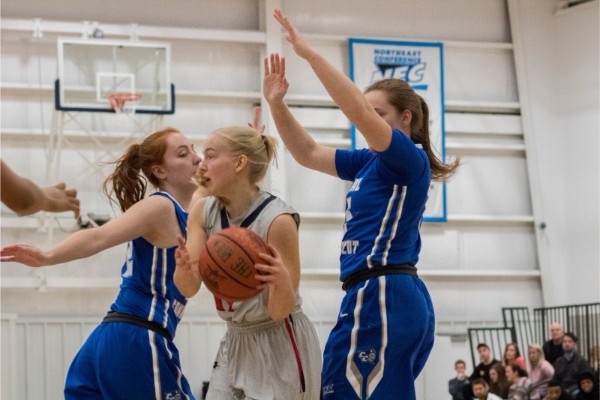 MOON TOWNSHIP– Robert Morris (2-1) won their first game at the new UPMC Events Center with a convincing win over Youngstown State (1-2), 58-43. Senior Nneka Ezeigbo posted her second straight double-double as she led the Colonials in points (17), rebounds (12), and blocks (2).

The first quarter saw an early flurry of scoring by both teams turn into a slow defensive game. Both sides went scoreless during a five-minute stretch before the Penguins took a late lead of 12-11. Ezeigbo, however, had scored the Colonials first six points and was involved right from the tip.

When asked about Ezeigbo’s performance, Coach Buscaglia said that “she did a variety of things today…putting back rebounds, and cleaning up a lot of misses, and just working really hard on defense as well.”

The Colonials found their game more in the second quarter as they made a 6-0 run and took a 24-19 lead into halftime, largely thanks to sophomore guard Esther Castedo’s seven points in the second frame. On creating opportunities for herself, Castedo said that “I was really playing for the team, not playing for myself… and we created some good shots.”

The Colonials’ quality of play continued upwards after halftime, as they dominated the third quarter by drawing offensive fouls on YSU and finally draining some shots from beyond the arc while continuing to feed the ball inside the paint.

Coach Buscaglia made some key adjustments during halftime that really helped the Colonials dominate the second half.

“We talked a lot about communicating, we had to be loud and communicate better so that we were on the same page and we tightened up some screws defensively,” he stated after the game.

At the end of the third quarter, RMU led 41-28 and though the Penguins pushed towards the end, some big defensive stops and more scoring from Castedo and Ezeigbo down the stretch would put things out of reach. While both teams put a focus on getting the ball inside the paint, the Colonials put up a dominant 36 points in the paint that was their key to winning today.

On her performance in the paint today, Ezeigbo said that “…being able to stay strong, grab boards and stay relentless is the key to my game… [but] a lot of the times when I score it’s because my teammates find me.”

Coach Buscaglia was happy to get that first win in the new arena, “We love our new facility and it feels good to finally be in here competing…”, while Ezeigbo and Castedo both remarked that “every game is important, and we treat every game the same way.”

The Colonials will continue their homestand against Columbia (1-2) on Sunday where Ezeigbo looks to reach 1,000 points in her career, as she is only 17 points away from the feat.