Falcons soar over Colonials in OT 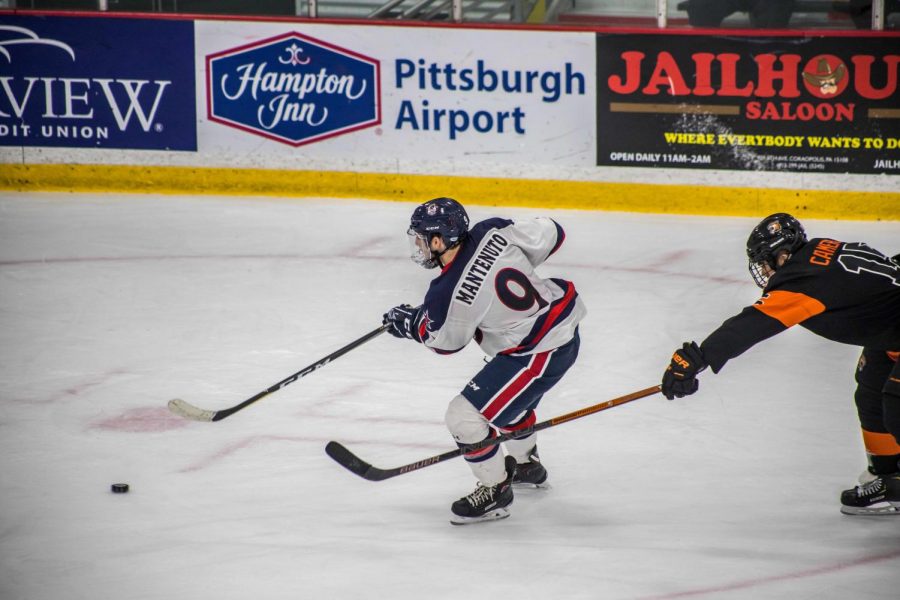 PITTSBURGH — After a disappointing offensive performance for the Robert Morris men’s hockey team (7-5-1, 7-2-1 AHA) in the first game of a two-game set against the Air Force Falcons (5-7, 5-3 AHA), the team would improve their efforts offensively, however, it would not be enough as they would drop this matchup 2-1 in double overtime.

On Friday night, the Colonials could not muster any offensive zone time as they totaled just 19 shots through 60 minutes of play, being shutout 2-0. The Colonials would not waste any time before scoring their first goal against Falcons’ goaltender Alex Schilling in game two. Mike Coyne grabbed a rebound off a shot early on from Sean Giles to put the Colonials on the board, it was his second goal of the season.

The early tally by RMU did not stop Air Force from continuing their dominating puck control from the prior evening as they were throwing pucks left and right towards goaltender Justin Kapelmaster.

The Colonials picked back up from their continuous undisciplined play as Roman Kraemer and Mike Coyne would both take penalties just three seconds apart for tripping and a faceoff violation, respectively. The Falcons were unable to capitalize on the golden opportunity as Robert Morris would kill the two penalties thanks in part to several big saves from Kapelmaster.

As the first frame of this contest continued, the Colonials earned themselves a power-play after Andrew Kruse slashed Jake Coleman on a developing 2-on-1, however, the Falcons would generate better scoring chances due to Matt Pulver’s strong play. Pulver’s two scoring opportunities were both turned away from Kapelmaster.

Both teams came out in the opening period with some energy, as it was fast-paced and physical, which was almost the opposite of their Friday night matchup.

The second period would start similarly to how the first finished, even back and forth play from end to end. Marshall Bowery for the Falcons was the first to make an exciting play as he would come in on a breakaway, but there was Kapelmaster once again shutting down the opportunity. The defense continued to show its ability to smother opposing teams’ offenses as Coyne applauded.

“We pride ourselves in the d-zone and try to close quickly and create turnovers, and then get the puck out quick as it definitely a defensive battle,” Coyne said.

Robert Morris, for the first time this weekend, would then sustain adequate zone time and move the puck nicely, but yet again could not gain a two-goal lead. Coyne mentioned the improved play from the evening before.

“Definitely played better tonight than last night but that wasn’t very hard to do, so we need to try to take some positives from it,” Coyne said.

As the game transitioned into the final period of regulation, Robert Morris would continue their tight defense and strong neutral zone play. Once again, Kapelmaster was at the center of attention with several big saves on another penalty kill effort, which was then followed by a huge toe save on Max Harper that would bring the Colonial faithful to their feet.

Kapelmaster’s solid goaltending gave RMU momentum but that was quickly halted thanks to Willie Reim tying the game for the Falcons with just 3:25 left to play in the third. Reim’s goal, assisted by Brady Tomlak and Blake Bride, was just enough to force overtime.

In the first overtime period, both teams had their fair share of opportunities, including a power-play chance for the Falcons due to an Aidan Spellacy tripping penalty. However, the Falcons could not execute and neither could the Colonials during even strength.

The second overtime frame, which transitioned to 3-on-3 play had a different result than the prior period. The Falcons had several great scoring chances, but on a power move to the net by Matt Pulver in which he threw the puck through the goalmouth connected to Max Harper who tapped in the game-winner. The goal would go under review due to possible offsides but further analysis upheld to Air Force goal.

After a failed 3-on-3 overtime for the Colonials, Coach Derek Schooley touched on the idea of the new style of overtime play:

“We’ve worked on it but not as much because it is something that has only happened one time through 12 games and we didn’t do a very good job,” Schooley said. “Our D got walked and we didn’t pick up on the back door so it’ll be something that we will continue to work on.”

In this contest, the Colonials were able to mount up a better attack but only managed to throw 24 shots on Schilling, who stopped 23 of the attempts. However, the defensive efforts of Robert Morris and Kapelmaster cannot be understated as the netminder stopped 41 shots and the team killed off five penalties. Schooley would attest to Kapelmaster’s play and his team’s inability to support the goaltending efforts.

“It’s a shame because we got a goalie who only let up three goals all weekend and only got one point out of it so it’s a shame to waste those goaltending performances,” Schooley said. “We got to do a better job of capitalizing on good goaltending.”

Through the two matchups, Air Force showed their puck domination, which truly proved fatal for RMU, leaving the Colonials with only one point out of a possible six.

The Colonials will move onto next weekend as they will play in a home-and-home series with Mercyhurst (4-8, 2-4 AHA). Robert Morris will seek to regain their stride in the goalscoring department in which proved lethal through their previous four AHA contests before Air Force.