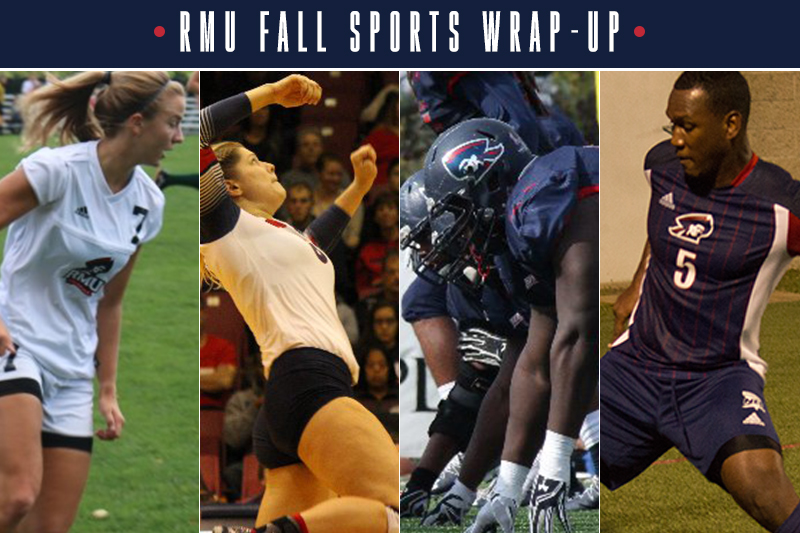 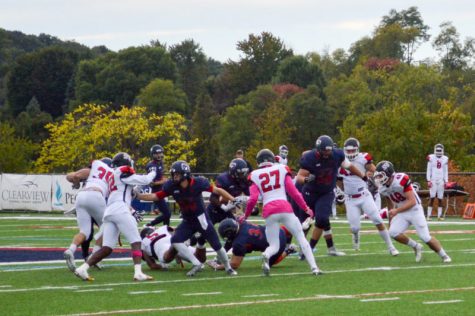 Football: Robert Morris has begun the offseason looking searching for ways to utilize its offensive weapons after finishing 2-9 (1-5 NEC) in 2016.

Head coach John Banaszak will be back next season after receiving a contract extension through the 2017 campaign.

The Colonials, in their third season under Banaszak, played exceptionally well on special teams, with sophomore running back Dante Satcher finishing with 14 kickoff returns for 465 yards for two touchdowns — one which went for a school record of 100 yards. Also, sophomore receiver Warren Robinson contributed in the punt return game with 253 yards and a touchdown.

Robert Morris also was without former running back Ramsese Owens and All-NEC receiver Kyle Buss for most of the year, which resulted in a step-back in production.

The Colonials’ defense was stellar as usual under defensive coordinator Scott Farison and the defensive-minded Banaszak. Freshman linebacker Gee Stanley eclipsed expectations, finding his way to lead the team with 8.5 sacks and 12.5 tackles for loss.

Redshirt-senior cornerback Marcelis Branch led the Colonials with two interceptions. Five others tallied one each on the season, with junior Ryan Richards Jr. taking an interception back 75 yards for a score in their win against conference foe Central Connecticut State.

Overall, the season was a disappointment for the Robert Morris squad. Coach Banaszak has another year to shape the program into what Joe Walton left. Many young athletes appear to be growing in the right direction and if everything goes the Colonials way, we may see an improvement from the last three seasons.

Women’s volleyball: Head coach Dale Starr brought his team into this season as the perennial title favorites — the defending Northeast Conference champs returned to the court in August with stars Arden Fisher, Leah Dunivan and April Krivoniak entering their senior seasons poised to make easy work of the rest of the NEC.

It was a strong start in non-conference tournament play for the Colonials as they went 6-4 through their first 10 games. A better than expected opening performance from RMU and one of the best in Dale Starr’s tenure, it appeared as though things were going just the way they were supposed to go.

But then the losing streak began.

Robert Morris went on to lose its next seven games, two of which against key conference opponents (who would both make the NEC tournament). The Colonials sat at 6-11, 0-2 in the NEC, on the outside looking in for conference play with their confidence beginning to wane.

RMU went through the rest of conference play beating the teams it should have, like Fairleigh Dickinson (3-29) and St. Francis (Pa.) (5-22). But the Colonials lost the games they needed to win by getting swept in both match-ups with Sacred Heart and Bryant, who would finish atop the NEC.

Somehow, through the tough conference losses, when the percent chance of making the tournament was at its absolute lowest, the Colonials went into the last game of the season with a winner-take-all match up against LIU Brooklyn for the fourth and final spot in the NEC tournament.

It was a tightly contested match, in which neither team won a set by more than two points. Although, a 3-1 sets loss sent Robert Morris back to Moon Township empty-handed. A season that had the potential to establish Robert Morris University as the new powerhouse in NEC women’s volleyball ended in brutal disappointment.

With the loss of Fisher, Dunivan, and Krivoniak for next season, the future of Robert Morris volleyball currently sits in unknown territory.

Women’s Soccer: The season started out in possibly the worst way imaginable for an RMU women’s soccer team that came into this season trying to replace the fourteen players it had lost from the 2015 campaign.

The Colonials started off 2-11 on the season, being the victims of losses in which they were outscored by upwards of five goals. Unable to really find a solution to its scoring problems, the only wins that RMU was able to muster occurred when goaltender Mackenzie Shearson was able to pitch a shutout, allowing the typical single-goal performance to be enough to earn a few victories.

The season seemed all but over after the aforementioned 2-11 start when something magical began to happen on the pitch of the North Athletic Complex. Starting with a victory at home against the Blackhawks of LIU Brooklyn, RMU rattled off four straight 1-0 victories to force a winner-take-all game against Central Connecticut State for a spot in the NEC tournament.

But it was not meant to be, as a 1-0 loss ended the Colonials’ season in the same fashion that almost saved it. Head coach John Kowalski and his squad ended the season 6-12 with only the thoughts of what could have been if they had just pulled off one more win.

The stats tell much of the story of the season. Senior Erin Ritzer led Robert Morris with 42 shots but was only able to net herself one goal in the entirety of the 18-game season.

Shearson was able to earn five shutout wins on the season, which placed her at 5th most by a Colonial in a single season.

Jane Schleicher was the leading scorer for the Colonials, yet she managed to score only three goals on the season.

Finally, Robert Morris was outscored 34-11 on the season, averaging 0.61 goals per game to create one the worst scoring teams in the history of Robert Morris women’s soccer.

The thing to look for going forward is the rising youth that surrounds this team. RMU only loses three players going into next season and will look to return to being a contender in the NEC. Much of that lies on the shoulders of Kasia Bak and Schleicher, as they will need to improve upon their performances this season and take charge of the offense next season in hopes of relieving some of the stress from their defense — which was singlehandedly responsible for every RMU win this season.

Men’s soccer: After dropping the first three games of the season, the Colonials seemed to find their game. With goalkeeper Winter Fondi receiving a red card in the first minutes of the season, backup Matt Bisceglia took over. Bisceglia let up eight goals in the two games that he played. An anxious RMU team finally got its starter back only to get beat up and down the pitch by Hartwick. The Colonials needed a break, and they got it.

Robert Morris promptly went on a tear for the next three games. Fondi looked very comfortable in net for those three games, letting up only one goal. The Colonials looked good for the first time in the season; they looked like they did in the season prior.

That ray of sunshine quickly disappeared as the game against Lehigh came to an end.

RMU would not win a single match in its next eight games. The team did draw two of those games, but its record desperately needed another tally in the win column. Five of those eight games were conference games. The Colonials were 0-4-1 in the conference.

Robert Morris went on to beat Central Connecticut 2-0, giving the Colonials their first win since Sept. 17. The season would come to an end as the Colonials dropped their last two games.

RMU was able to score 11 goals the entire season. Last season, the Colonials were able to put 28 shots in the back of he net. Neco Brett was a big name for Robert Morris last season — Brett scored 13 goals last season, which trumps the 11 scored by the entire team in 2016.

Lucas Puntillo was second on the team in goals last season with five. This season, Puntillo scored one goal on 31 shots. Rafael Bruzual was the only player that played last season and improved on his goals scored. He increased his count by one goal. Losing Puntillo’s four goals and Brett’s 13 was a big reason for the missing scoring for this year’s team.

The offense was not there this season, and the team paid for it. The Colonials final record was 4-11-2, and their NEC record was 1-5-1.

Just like the women’s team, the thing to look forward to is the youth movement. The majority of the players on this team are underclassmen. Only three players are leaving this season: Bennett Jull, Curran Edland and Chauncey Albright. Puntillo is a quality player and should rebound next season after this “sophomore slump.” Fondi and Bruzual still have one more year left.

If the offense can put more in the back of the net, RMU will be much better. Expect a better season next year as the Colonials try to rebound from this season.