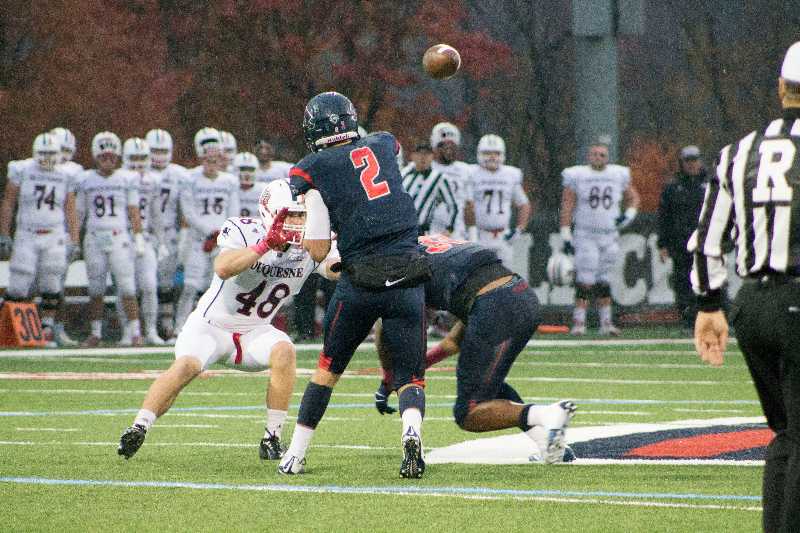 A game reading 0-0 at halftime usually ends up somewhere in the range of 14-21 points total. And that was the case for this game, indeed.

But only for one of the teams competing.

Freshman quarterback Matt Barr looked extremely uncomfortable throughout this game, finishing 14-of-27 for 195 yards, no touchdowns, and five interceptions. Though, to be fair, there were promising drives that just did not muster very much success in the Blue Devils’ territory.

The Colonials’ first drive saw Barr lead the offense into CCSU territory, only to have a ball picked off by Najae Brown inside the 30-yard line. A similar drive early in the second quarter began with ten plays to march RMU inside the redzone; however, it ended in the same result: a Barr interception, this time to Jevon Elmore, who was downed in the end zone for a touchback.

Luckily for Robert Morris, its defense came ready to play in the first half.

The Blue Devils’ first two offensive drives resulted in missed field goals, while the second two ended in forced punts via three-and-outs. Even into the second half, Central Connecticut’s firs two possessions concluded with a punt and interception, respectively.

But, like it has been for the majority of the season thus far, the offense was unable to raise its level of play to complement the defense. A blocked punt and interception return by CCSU, both for touchdowns, certainly did not make life easier for defensive coordinator Scott Farison’s squad in the final two quarters.

Down two touchdowns despite only allowing its opponent to cross the end zone plane once, the Robert Morris defense continued to battle, only allowing 140 yards of total offense from that point through the end of the game.

Another aspect to consider was the fatigue factor. The Colonials defense held its own in this match-up, despite being on the field for 17:49 in the second half alone and 34:19 over all four quarters. And even that number is misleading.

Because half of RMU’s six turnovers (five interceptions, one fumble, all by Barr) came in the midst of long, sustained drives, the time of possession was more balanced than the score indicates.

Kicker Connor Shenan was heavily involved in the game, even though the junior did not get to attempt a field goal. He was thrown in to punt the ball for the first time this season, filling in for starting punter Adam Check.

The Colonials will look to get back on track when they host non-conference foe East Tennessee St. (1-7, 0-3). Kick-off from Joe Walton Stadium is set for Nov. 7 at noon.