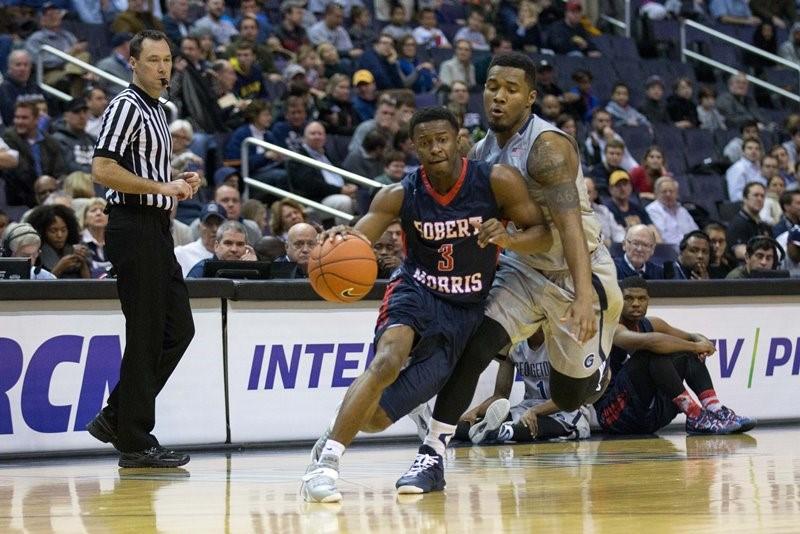 Here are five thoughts on Robert Morris’s 80-66 loss to Georgetown Saturday afternoon at the Verizon Center in Washington D.C.

The Robert Morris offense had issues getting into gear on the hardwood of the Verizon Center. The RMU offense was only able to muster 24 points in the first half, going 7-28 in the first half.

“I thought offensively we settled for some jumps shots that we didn’t need and dug ourselves a decent hole at half, “said RMU head coach Andy Toole.

In the second half however, the Colonials regrouped and kept paced with one of the best teams the Big East has to offer.

And coach Toole was still positive looking into the future.

“I think our offensive play will improve, that being said, I still think we have to find other creative ways to score.”

2. Rodney Pryor continues to have the hot hand

Much like Marcquise Reed’s breakout earlier in the week at North Carolina, over the last two games, no one has been hotter than Rodney Pryor. Following his 26 point performance against Bradley earlier in the week, Pryor continued his hot hand in the nation’s capital, leading RMU with 16 points in 17 minutes of work.

Pryor was intrigued by a match-up with a top-tier college team in the Hoyas as a measuring stick for the Colonials.

“I think it’s a chance for us to see where we stand,” he said. “These are the high majors of our college basketball world, these are guys that are potential pros so we come in and we wanna compete at a high level and show that we can also play with these guys even though were a mid-major.”

For junior Stephan Hawkins, it hasn’t been the easiest of moves into the starting line-up. The Lake Station, Indiana native was held scoreless for the third time in four games this season.

The Hoyas 6-foot-10, 350 lb senior Josh Smith was able to contain Hawkins with considerable ease, and on the flip side Smith recorded a double-double with 22 points and 11 rebounds.

Considering half of the games Hawkins has played in is against some of the best the NCAA has to offer, his game should improve considerably once the Colonials get into conference play.

Following the lost Saturday at Verizon Center, Georgetown head coach John Thompson III also gave his praised for Reed, who was playing only eight miles from his hometown of Landover, Maryland.

“… He is one of these guys that’s going to get six points by being the court. We just wanted to be attentive to him, he has some pretty good games so far in his young career,” he said. “It looks like he’s guuna keep doing what he did in high school, which was put the ball in the basket.” For Reed, it’s another positive review from one of the best minds in college basketball.”

Going into halftime at the Verizon Center, the Colonials were down, 36-24, and looking to change the momentum. Robert Morris was able to do that with a strong second half of basketball.

Andy Toole was also proud of the way his team fought until the clock showed three zeros.

“We did do a good job of fighting back at the end of the game which we’ll take and talk about how to try and extend that period of play for a much longer time,” he said. “But I’m proud of the way that the guy continued to fight and play the right way regardless of the score, and that’s something that we’ll take and build off of.”

Robert Morris continues its season long five game road trip with a trip to take on the Chattanooga Lookouts this coming Wednesday. Tip-off is set for noon.