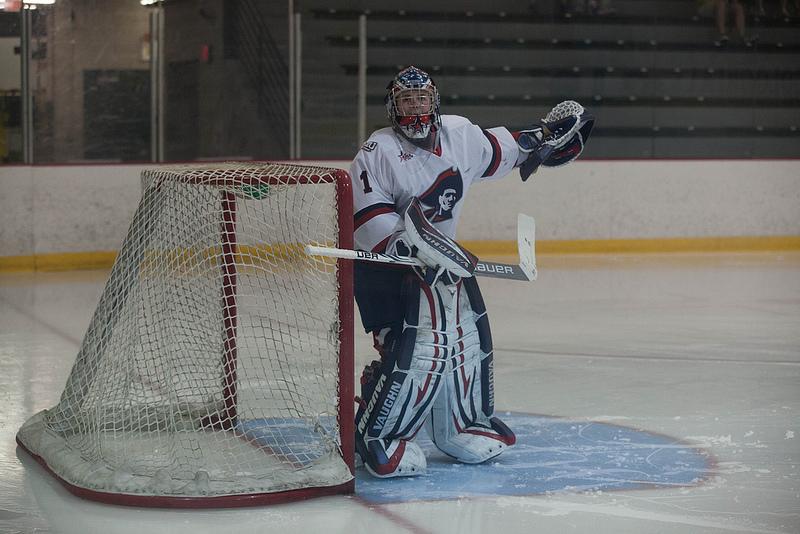 Eight freshmen have joined the RMU women’s hockey roster this year, but one in particular has been making her presence known.

Goaltender Jessica Dodds has collected three accolades so far:  RMU Student Athlete of the Week, CHA Co-goaltender of the Week, and CHA Rookie of the Week.  Along with those honors, she is the first RMU women’s hockey goalie to post back-to-back shutouts against Bemidji State and Boston University.  Her numbers don’t lie either, as she leads the CHA in both goals against average (0.65) and save percentage (.097).

“Its given me a lot of confidence, but I couldn’t get through it without the team,” the netminder said of her achievements.  “They help me so much and it would be hard to get those without having the team behind me.”

According to forward and captain Kristen Richards, the team has welcomed her with open arms, particularly on the ice.

“She has a winning record.  She’s undefeated as a freshman which is something that is second to none,” said Richards.“She’s doing a great job, playing extremely well.  We can’t ask for much more, especially from a freshman.”

However, it should come as no surprise that the Ontario native is flaunting in net.

Dodds has had national experience back home in Canada, competing on Team Ontario Blue and on the Canadian Women’s National Team. She competed in the 2012 Canadian National Women’s U18 Championships while on Ontario Blue, and was named top goaltender of the competition. With the national team, she contributed to a gold medal at the 2013 IIHF U18 Women’s World Championship.

“It has helped me an lot because the pace of Team Canada was a lot like the pace here and it’s pretty much comparable and it’s really similar to the pace that I’m playing at right now. I’m kind of already used to it because of the level that I was playing in Europe,” said Dodds.

One of the remarkable elements of Dodds’ goaltending style is her coolness in net.

“If something happens out on the ice, I’m just so in the zone that I don’t really care what happens in the sense of if someone comes in and snows me or another player on the other team hits me, I won’t retaliate and I’ll be really calm and just pretend it didn’t even happen,” she explained.  “And I think that helps a lot because if you’re jittery, you’re bound to make mistakes, so as long as you’re calm and collected, you’re always focused and in the game.”

“She’s extremely focused as a goalie,” concurred Richards.  “In the dressing room she’s always got her headphones on.  She’s that kid that is always focused, no matter what.  She definitely looks a lot calmer on the ice than some but it’s nothing out of the ordinary for her.”

This season, Dodds holds a goal shared by many members of the team, which is to be named CHA champions and continue to the NCAA tournament.  She’ll do whatever it takes, whether it’s pushing herself at practice or arriving early to get in some extra ice time.

“I try to push myself as hard as I can because I know that’s only going to make me a better goalie.  People can slack off and whatnot but they’re just going to be good, I want to be great.”

With her current attitude and work ethic, Jessica Dodds could be just that.