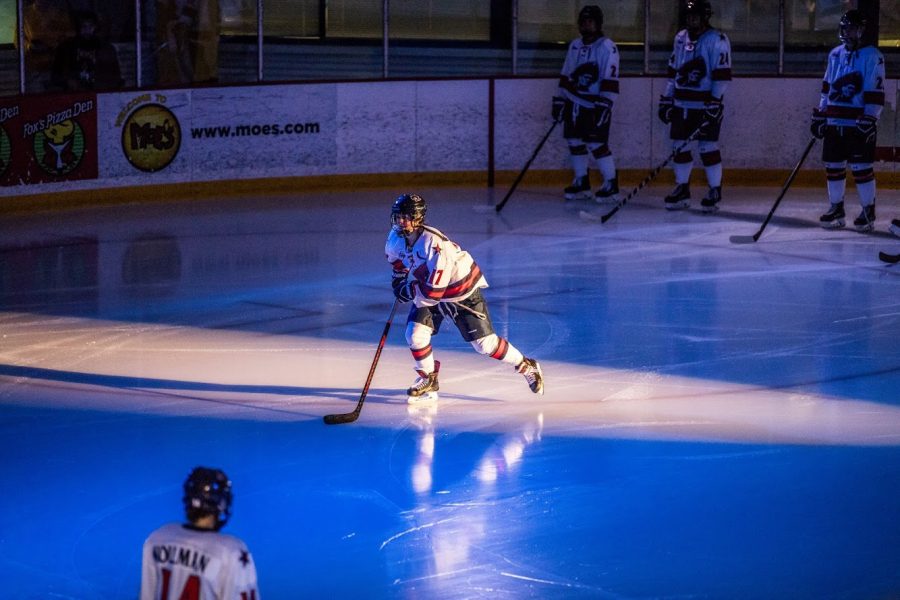 PITTSBURGH– The Robert Morris women’s hockey team (15-9-2, 9-3 CHA) played a solid sixty minutes Saturday afternoon to march to a 4-1 win over the Lindenwood Lions (4-16-3, 2-10 CHA). Senior captain Jaycee Gebhard scored three points and passed Brittany Howard for the all-time point lead in RMU women’s hockey history with 183. Gebhard is now statistically the best to ever lace them up.

“It’s awesome to be a part of it and to share it with her today. When you break an all-time record like that it’s a four-year process. It’s a hard thing to do and you talk about deserving, we have obviously had great players in the past with Brit Howard, just a tremendous player for us,” added head coach Paul Colontino on Gebhard’s record.

Early in the first period, RMU surprisingly found themselves down a goal with Lindenwood’s Courtney Ganske burying home a one-timer in the slot. This snapped Raygan Kirk’s shutout streak and Lindenwood would have their first lead of the series. This would be the only goal scored for the Lions, however, as Kirk would finish the game with 19 saves on 20 shots.

Not long after this goal, Lindenwood took a penalty, and if you know anything about RMU women’s hockey, you know exactly what happened next. Emily Curlett scored her mind-boggling 13th goal of the season with assists going to Lexi Templeman and Michalea Boyle initially. However this goal was changed to give Jaycee Gebhard the secondary assist which would prove to be important a little later on.

Robert Morris was given another power-play with exactly two minutes remaining in the first period. A shot from Sarah Lecavalier hit the glass behind the net and bounced back right in front of an RMU player. That RMU player was Jaycee Gebhard, who sniped home a shot and scored a historic goal. With Curlett’s goal getting changed to give a secondary assist to Gebhard, this goal would be the 182nd point of Gebhard’s career. She had become the all-time point leader.

In the first period in the locker room was where Gebhard got the news that she was now the all-time leader and later on PA announcer Larry Snyder announced the news to the fans.

However, the second period wasn’t all sunshine and unicorns for RMU as they went down to nine forwards. Both Lexi Templeman and Maggie Burbidge left the game and with Paul Colontino deciding to roll seven defenseman, RMU was down to three forward lines. Nonetheless, the depth stepped up like it has all season for RMU. Early in the second period Michaela Boyle found Courtney Kollman on a breakaway chance and Kollman promptly buried it five-hole for a 3-1 RMU lead.

“You have players that are ready for an opportunity and they seamlessly jump in when they are called upon. You have players like Marah (Wagner) who has sporadically gotten shifts but never to the extent that she had today. She was a rockstar in the third creating opportunities and she was ready for the moment. You combine that with Joe (Joelle Fiala) and Leah (Marino) and in the third period they generated a lot of grade-A opportunities,” Paul Colontino stated about his teams depth.

RMU found themselves in a bit of penalty trouble midway through the second period, but that didn’t seem to matter. The Colonials were controlling the game ever since the Curlett goal and this continued as Jaycee Gebhard broke away and scored a short-handed goal. If there was any doubt that Jaycee didn’t get the point on the first goal, she now confirmed her place in RMU history.

The third period resulted in no goals but still a great period for RMU nonetheless. Rolling three lines, the Colonials were able to close things out still controlling play. Lindenwood’s one-goal lead in the first was really the only sign of life they had in the game.

“I thought we did a nice job of playing the full 60. We were definitely working and creating opportunities and really that’s what matters. We put together two strong games” stated Colontino.

“Were just going to take this off weekend to rest and regenerate to get ready for the last eight games. We know that every point matters and were taking it one game at a time,” stated Jaycee Gebhard.