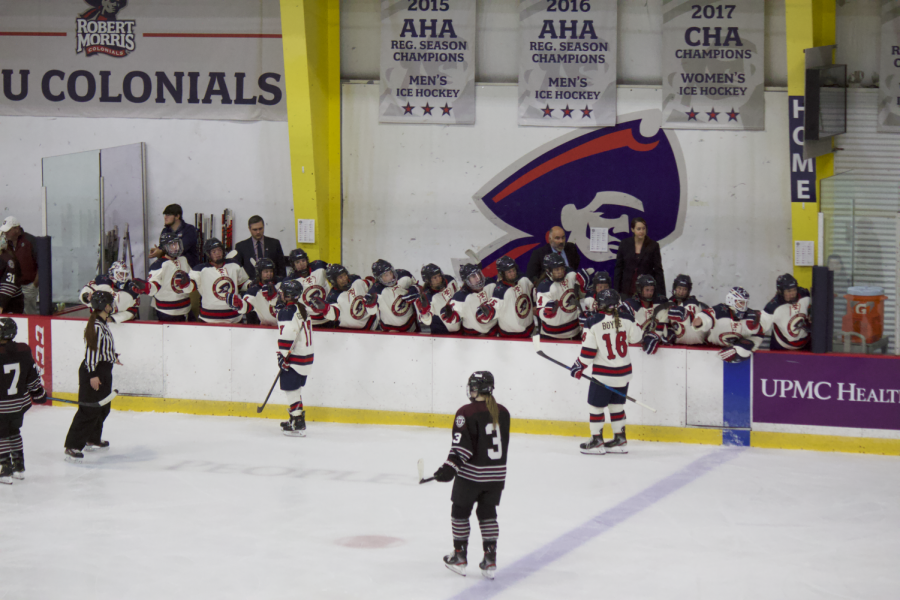 MOON TOWNSHIP– A dominant six-goal game by the RMU women’s hockey team (1-0) led them to their first victory of the season. The Colonials’ dominant win came against Union (0-`1). Robert Morris wore new home jerseys which Jaycee Gebhard calls “so awesome.” Gebhard started her senior season off in style with a natural hat-trick and two assists for five points. Freshman goaltender Raygan Kirk also stood out as she played the entire game only with one goal against.

“It was a tough one that squeaked through me, but there are lots of games ahead to get a shutout there,” stated Raygan Kirk on the lone Union goal that ended her shutout performance.

Midway through the first period, the Colonials struck first as sophomore Mackenzie Krasowski potted in a rebound in and made it 1-0. The assists on the goal went to none other than Lexi Templeman and Jaycee Gebhard. Templeman and Gebhard would connect roughly five minutes later as Gebhard sniped home a one-timer from Templeman making it 2-0.

These early two goals were a result of high-paced Colonial hockey. The forechecking and breakouts from this team were clicking right from the start. According to Gebhard, this is something they have been diligently working on in practices.

“Pretty much all week we worked on breakout passes with pressure and we also worked on drills with bad ice conditions this week. It was nice to see that progress and it will be something we continue to work on.”

In the second period, Union came out much stronger, but Raygan Kirk shut the door allowing none in the frame. The Colonials’ powerplay was able to add another goal as they worked their magic, as Jaycee Gebhard made it 3-0 in favor of RMU. The chemistry between the top power-play unit was something special tonight.

“We work on our powerplay a lot and that is definitely one of our strengths and having people returning that know what they are doing is great. Having that experience really helps a lot,” stated Lexi Templeman on the chemistry on the top powerplay unit.

In the third, after Union added a goal, the Colonials exploded offensively scoring three goals. Joelle Fiala started this off by feeding Anjelica Diffendal for a beautiful tip-in goal for a 4-1 lead. Then, Jaycee Gebhard finished off her hat-trick with a rebound goal, before assisting on a nifty faceoff play to Lexi Templeman who scored the sixth goal. Gebhard was able to win the offensive-zone faceoff forwards and pass it Templeman for an easy goal.

“It is definitely a thing that me and Jay had in the back of our minds. You can’t try it too often obviously but we saw the opening and took it,” said Templeman about the craziness of her goal.

RMU closed out the game with a 6-1 win and a “Skate with the Colonials.” RMU will be back in action tomorrow afternoon against Union against at home at 3:05 p.m.