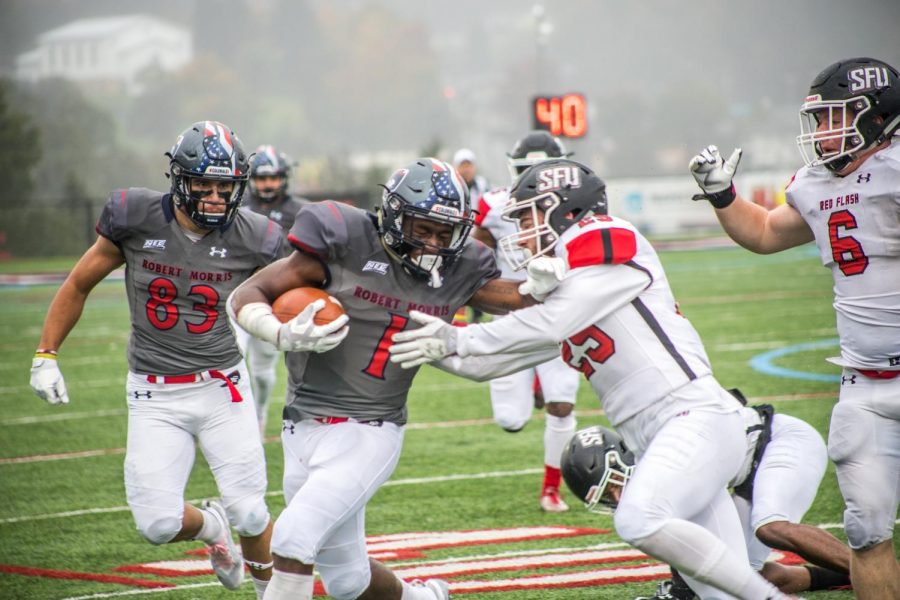 MOON TOWNSHIP — The Robert Morris Colonials football team (2-8, 0-4), fell to the Saint Francis University Red Flash (3-5, 1-2) on Saturday. The Colonials came into the game looking to build off of their win the previous week against the Central State Marauders but wound up falling to the Red Flash by the score of 20-7.

RMU came into this game averaging just over 30 points a game, while their struggling defense let up an average of 48 points per game. The story of the season so far has been that if the Colonials want to win, the offense needs to be putting up big numbers since the defense can’t be relied on to win games. However, when the Colonials defense finally looked better than they have for almost the entire season, it was the offense that couldn’t get things done.

The Red Flash’s first drive of the game ate up 9:18 of the first quarter and gained them 71 yards, but once inside the red zone, redshirt freshman Zach Cambell fumbled the ball and Tyler Lamica recovered for RMU. Despite the lucky break, and the Red Flash’s first of two fumbles, the ensuing drive for the Colonials lasted six plays in which they were only able to move the ball 29-yards.

After fumbling on the first drive, the Red Flash took to passing on five of the seven plays on their next drive, where quarterback Bear Fenimore completed a 30-yard pass to wide receiver Cyrus Holder for the first score of the game.

Once the RMU offense got the ball back in their hands, they still couldn’t get the engines started, when they had a three-play drive in which they lost two yards. After receiving the punt from Adam Check, SFU was able to drive down the field into the red zone where senior Eric Bofenkamp kicked a 32-yard field goal to put the Red Flash up 10-0.

The Colonials offense began to get things moving on their next drive, which lasted ten plays and saw them move the ball a total of 57-yards. During the drive, the Colonials’ punter Adam Check was awarded a roughing the kicker penalty, which gave the Colonials 15-yards and a first down. This also allowed the drive to continue. After the lucky penalty, quarterback Jimmy Walker scrambled down the middle of the field for a pickup of 17-yards. However, two plays later, he fumbled the ball while trying to pitch the ball to his running back, and the drive ended in zero points on the board for RMU.

The Red Flash then drove 61-yards down the field before the first half ended, where kicker Eric Bofenkamp made another Field goal, this one 39-yards, to extend the SFU lead to 13-0.

RMU received the kickoff at the beginning of the second half at the 26-yard line but again were not able to get the offense off the ground. Due to a holding penalty, a sack and a false start, the Colonials were forced to punt on fourth-and-31, ending their drive after only six plays.

After forcing a punt from the Red Flash, the Colonials themselves had to punt after a short three and out. After the Colonials offense again failed to score, the defense came out and forced another punt, giving the offense a chance to get something working. While the Colonials next drive saw them get in the red zone thanks to a 23-yard run by Terence Stephens, they were again unable to capitalize and lost the ball after failing to convert on fourth down.

On the Red Flash’s very next drive, a pass from QB Bear Fenimore was caught by Kam Lewis for 52 yards. This put them on the 15-yard line and primed to put more points on the scoreboard. After a rush by Jymere Jordan-Toney, and a pass caught by Terrell Johnson, the Red Flash were up 20-0 against the Colonials.

The next two drives by each team resulted in a punt, but eventually RMU would get the ball back in their hands. After Jimmy Walker completed an absolute dime of a pass to Wide Receiver Matthew Barr for 34 yards, the Colonials were again in the red zone and just yards away from finally scoring. After a 3-yard  touchdown pass to Matthew Gonzalez, the Colonials were finally on the board, but with just under five minutes left in the game, the touchdown came too late.

After one fourth and out by each team, time ran out on the clock, and the game ended with the Red Flash winning 20-7 over the Colonials.

Although the lone touchdown didn’t help the team win the game, it did help Matthew Gonzalez put his name into the RMU history book. With his 11th receiving touchdown of the year, Gonzalez now holds the record for most receiving touchdowns in a single season, and will most likely score several more, as he has only failed to score in two of RMU’s games this season.