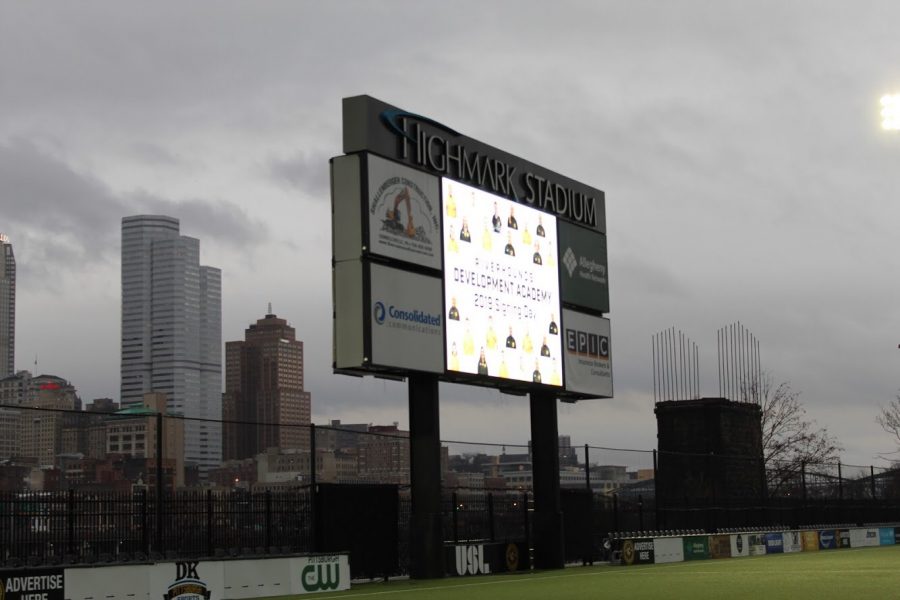 PITTSBURGH — At Highmark Stadium, the Pittsburgh Riverhounds SC hosted Duquesne University for a preseason match-up with the final score being a 0-0 draw for the two clubs. For what it’s worth, the Hounds are now 2-0-1 on the preseason.

Assistant coach Dan Visser said that, after the previous two games against Gannon University and Cleveland State University, “I think we made some progress this week, I don’t think it showed tonight, I think we were disappointed with not only the result, but also the performance.”

The starting lineup for the Riverhounds was Kyle Morton in net, Brennan Ireland and Jordan Dover at the fullback spots, Jordan Skelton and Nadeer Ghantous at center back. In the midfield, Kenardo Forbes and Sammy Khasai were in center, while Noah Franke was on the left wing and Anthony Velarde was opposite him on the right. The two strikers were Neco Brett and Christian Volesky.

For Duquesne, tending the net was Robbie McKelvey, and the four backs were Eric Zech, Kendall Newman, Rob Dymond and Ryan Landry. At central defensive midfielder, Nathan Dos Santos was manning the pitch, while Kurtis Orrson and Noah Mehta were in front of him. On the wings were Zach Hall and Manel Busquets. The lone striker on the night for the the Dukes was Jack Shearer, a transfer from the St. John’s Red Storm.

Throughout the early stages of the game, both teams were unable to get much of an offense going, when shots by Brett for the Riverhounds and Hall of the Dukes went over the net. The Riverhounds got their first great chance in the 18th minute, when Brett sent a screamer on goal, but it was saved by McKelvey in net for Duquesne.

The Riverhounds had a chance in the 23rd minute when Jordan Dover looked to find Brett in behind the Dukes defense, but Nathan Dos Santos of the Dukes slid down, and blocked the pass. In the 30th minute, Manel Busquets, a sophomore from Barcelona, Spain was taken down just outside the Riverhounds box, but no foul was called.

In the 33rd minute, the Riverhounds looked to gain a bit more on offense, Steevan Dos Santos, the new signing, came on for Christian Volesky. At the end of the first half, it was still 0-0, just like it started.

At the start of the second half, the Hounds made wholesale changes to their lineup, as it is preseason. Ben Lundgaard was now in goal, while the back four was comprised of Caleb Smith, Jordan Skelton, Ryan Gallagher and Ryan James. The midfield was brand new, with Joy Schoonhoven, Kevin Kerr, Mouhamed Dabo and Devyn Jambga. Up front was Neco Brett and former Rochester Rhino, Steevan Dos Santos.

As seen in their attackers, the Riverhounds have three solid options in Steevan Dos Santos, Nico Brett and Christian Volesky. Coach Visser said that, “We’ll see how that plays out, there was definitely a focus in the offseason to add some attacking pieces to our mix.” Brett added that “It’s all about team. Everyone wants to play, and you just have to work hard, but at the same time, encourage each other to do better.”

In the second half, it was the same for both teams, possession around the middle third of the pitch. The Dukes had a chance in the 57th minute, but Jack Shearer put it just past the right post. In the 62nd minute, there was another substitution for the Riverhounds, as Tobi Adewole came on for Jordan Skelton, and Christian Volesky came on for Neco Brett.

With 24 minutes left, the Riverhounds had a glorious opportunity on a cross by Steevan Dos Santos that found the head of the freshly substituted Christian Volesky, however, the shot went just wide. Later in the half, Mo Dabo looked to beat the Duquesne keeper past the left post, but it went just wide. For the final 10 minutes of the game it seemed to be more of the same. In the 88th minute, Tobi Adewole had a yellow card for the Riverhounds. Noah Mehta had the final chance of the game, sailing a shot over the head of Ben Lundgaard. At the final whistle, the score was 0-0.

Looking forward to the Riverhounds next game on Sunday at home against the University of Charleston (WV), forward Nico Brett said that, “We just have to do more finishing, players can be a bit more confident, and focus a little bit more, I think we’ll be fine.” Kickoff for Sunday’s game will be at 2:00 p.m.