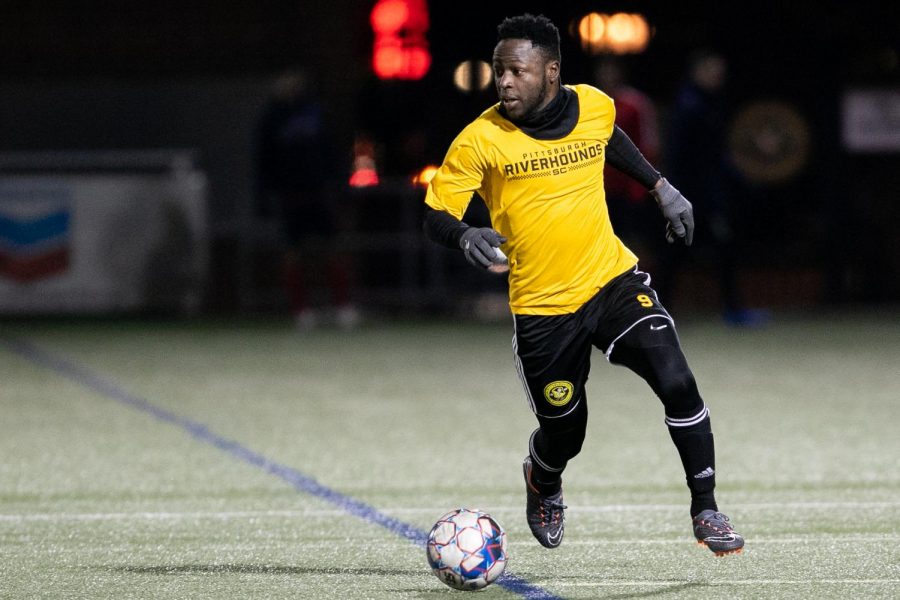 PITTSBURGH- On Sunday afternoon, the Pittsburgh Riverhounds SC hosted the University of Charleston (WV) at Highmark Stadium for their fourth of nine preseason games before the USL regular season starts. The teams played to a 0-0 draw, the same score as the last game for the Hounds. Their preseason record now sits at 2-0-2.

While no goals were scored, head coach Bob Lilley was not too disappointed in today’s result. “Today, we had a pretty good lineup out there. It’s good to see them playing together. I thought we played better than the other night [against Duquesne], and [Charleston] made it hard for us today, they limited our chances.”

The Riverhounds controlled most of the first half, firing five shots on goal, as Charleston was blanked in shots. The Hounds’ best chance came in the thirteenth minute when Kevin Kerr sent a shot on goal that Charleston goalkeeper Ian De Oliveira Martins made a diving save on, and led to a Riverhounds corner kick. The kick ensued to no avail.

There were no substitutions in the first half for the Hounds. At halftime, the Hounds and the Golden Eagles were deadlocked at zero.

The Riverhounds started the second half with the following players: goalkeeper Kyle Morton, defenders Caleb Smith, Nadeer Ghantous, Vancaeyezeele, and Dover, midfielders Forbes, Dabo, Noah Franke, Anthony Velarde and Kerr, and Christian Volesky held the lone forward role as the Hounds opted to go with five midfielders, and Vancaeyezeele moved to the backline.

A light rain began in the second half. The half started with an immediate kick from Volesky, however, De Oliveira Martins watched it sail high over the net.

This half was similarly dominated by the Hounds, who had another five shots to Charleston’s none. In the 55th minute, Franke sent a cross over to Volesky, who dove for the header, but he just missed it, crashing into the goalpost in the process. He was slow to get up but eventually did and resumed playing.

In the 79th minute, the rain picked up, as players started to slip on the turf, most notably Devyn Jambga on a fast break. The Golden Eagles were held without a shot in the half once again and did not record a shot in the game.

This was the second straight clean sheet for the tandem of Morton and Lundgaard. The Hounds have not allowed a goal this preseason four games in. However, Lilley does not think it will build confidence for them heading into the regular season facing minimal shots. “There’s still mistakes being made by them. They’re facing so few shots in four games, everyone in camp has to get better over the next four weeks.”

Thomas Vancaeyezeele, who attended the University of Charleston and played for their soccer team, said there is a sense of pride playing against his school. “I know all of them, I know the coaching staff. It was like I was going home.” Vancaeyezeele is from Caen, France, and played for Charleston from 2016-17. He also said that these preseason games are a learning experience as well. “We are still working on our feet and our defense, in preseason games we try to learn.”

The Riverhounds have five preseason games left, and their next one is on February 22nd at Ambrose Urbanic Field at the University of Pittsburgh. The game will be played at 7 p.m.