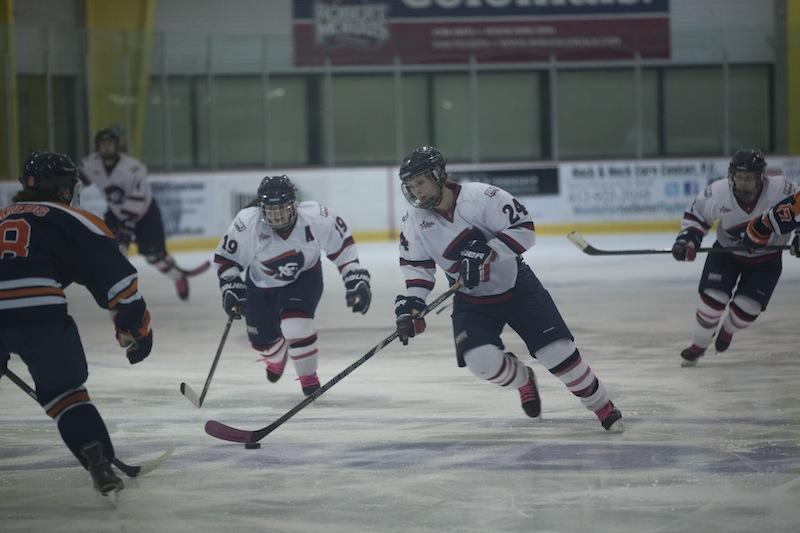 The last time that the Penn State and RMU women’s hockey teams met, the Colonials walked away with two shutouts.

And this occasion was no different.

The Colonials dominated the offensive zone in the opening frame. A myriad of players showered Penn State goaltender Nicole Paniccia with shots from all angles. And things didn’t get easier for Paniccia.

Ten minutes into the same period, she was toppled by a few Colonials and was visibly shaken up.

Seven minutes later, newly named CHA student athlete of the year, Katelyn Scott, would slip a puck past Paniccia for her second goal of the season and first of the game. Senior Thea Imbrogno would contribute to the goal with an assist.

Two goals would be credited to the Colonials in the middle period. On a power play, Rebecca Vint would connect with Imbrogno who snapped the puck to Brittany Howard. Before Paniccia could blink, the freshman sent the puck flying into the netting.

“We have a set play where we go to [Vint] and then we go to me and I try to hit [Vint] or Howard. Then Howard’s kind of in the soft slot so when I hit it to her she one timed it and scored,” said Imbrogno of the goal’s setup.

Imbrogno’s assist would set her at 122 career points, which places her first in the category in program history.

“I’m just happy that we won today.  I could’ve gotten two points, but we could’ve lost and that would have meant a lot less,” said the assistant captain of her accomplishment.  “I’m happy that we’re trying to get our mojo back and start rolling like we were first half.”

For the second goal of the second period, Katie Fergus would deflect a shot from Maddie Collias situated in the slot.

The Colonials came out flying in the third period, striking just 4:23 into the frame.  Kylie St. Louis moved the puck down the ice before handing it off to Collias. Vint would take a shot from the left side for a goal that would set the score to a solid 4-0.

However, the shutout would end 35 seconds later when Penn State’s Hannah Hoenshell made a pass to Laura Bowman, who snapped the puck past Jessica Dodds’s left shoulder.

The Colonials retaliated when Ashley Vesci would carry the puck from the left side to a waiting Kristen Richards, who quickly shoved the puck past Paniccia.

At 15:22, Penn State’s Hoenshell gave the puck to Amy Peterson who navigated through traffic to net the final goal of the evening.

“I definitely think they picked up their pace and I think we might have stepped off pedal a little bit unfortunately and made some mistakes that cost us big,” said Scott of the team’s third period performance.

“We have to be able to make in zone and in game adjustments much quicker.  I thought that was a great test for us,” said head coach Paul Colontino. “I thought Penn State did a great job of changing things up after a very tough second period.  But for us, we just have to get better at making adjustments in game.”

With today’s win, the Colonials have clinched a first round bye in CHA playoffs. After tomorrow’s game, the team will have a week off and travel to Mercyhurst on March 7 for the first playoff game.