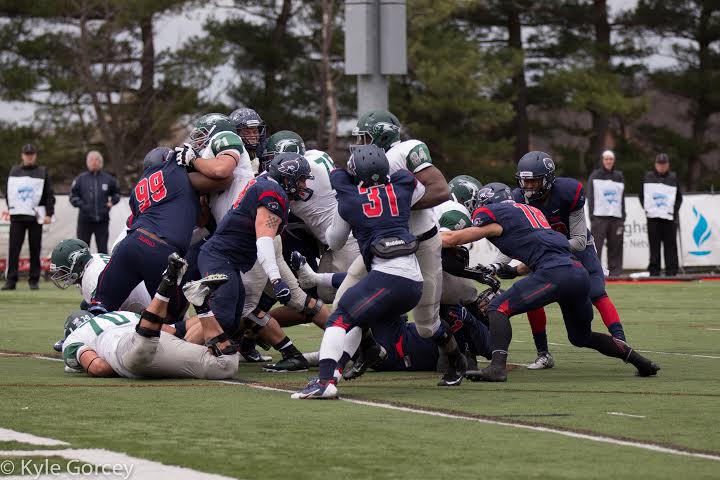 Robert Morris had its backs against the wall before Saturday’s Northeast Conference matchup with Wagner even began. With multiple starters out across the depth chart, chances of coming out out with a win were already looking rather slim.

Just 132 yards of total offense and four quarterbacks later, Robert Morris fell 20-0 in the first shutout loss at Joe Walton Stadium in program history. Every time the Colonials caught a break, something found a way to go wrong.

It was the story of the afternoon.

“Yeah, we’re 1-8 now. But there’s no way we’re losers. Losers are guys that quit, and we got beat. That’s the way I look at it,” said head coach John Banaszak.

Starting quarterback Derik Abbott left the game after the first RMU drive with an ankle injury and did not return. Luke Brumbaugh was called on in relief, and finished 7-of-14 for 91 yards before a blind side hit midway through the third quarter ended his day as well. The injuries forced third-string Joe Carroll to take his first snaps of the year.

“When [Abbott] went down, I felt okay putting [Brumbaugh] back in. Then we couldn’t protect him and he got banged up and we’ve got to put [Carroll] in,” said Banaszak. “It’s a situation where he doesn’t get a lot of throws during practice, and that’s just one of those things you can’t avoid.”

Down 14-0 with 59 seconds left in the third quarter, Robert Morris gained some momentum on a 44-yard punt return from Antwan Eddie. Beginning the drive inside the Wagner five-yard line, Carroll was then intercepted on his second pass of the game by DB Jarrett Dieudonne, who returned it 99 yards for a touchdown.

The pick-six made it 20-0, instead of a very manageable seven point deficit.

“It’s a killer,” said Banaszak. “It’s pretty frustrating, especially when we made some big plays. We made a great punt return and a great kickoff return, and we don’t get any points out of it. It’s a little frustrating, no question about it.”

The defense did all it could to keep RMU within striking distance. They held Wagner to 215 yards of total offense, and just 5-of-16 on third down. Wagner’s only offensive touchdown came on a one-yard quarterback sneak right before halftime, with the rest of the points coming off field goals, a safety and the interception return.

Not much else the unit could do with minimal support from the offense to work with.

“Obviously, when you don’t score any points you can’t win a football game,” Banaszak said. “But I’m so proud of these kids on defense and special teams, they’re fighting, they’re not quitting.”

Senior receiver Duane Mitchell had three receptions for 55 yards, extending his record to 31 consecutive games with a catch. He’s on pace to break the single-season reception mark he set a year ago.

Robert Morris takes on St. Francis next week in its final home game of the year on a noon kickoff.